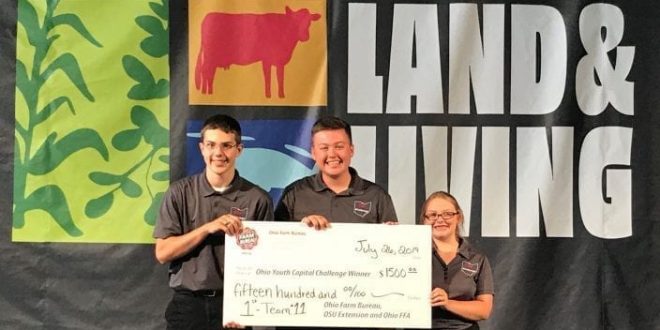 Sponsored by Ohio Farm Bureau, Ohio 4-H and Ohio FFA, the challenge brings together youths ages 14 to 18 from around the state to discuss community concerns and then work together to propose policies and programs to solve the issues.

The 2019 winning team members are Caleb Durheim and Dustin Hill of Delaware County and Samantha Hinton of Seneca County. The team members share a $1500 prize for finishing first in the competition.

The challenge started in the spring when groups met to learn about public policy issues and began planning their proposals. A preliminary contest narrowed the field down to four teams, which competed in the finals during the Ohio State Fair.

Other finalists who received a $250 scholarship for their proposals:

Savannah Henderson and Mason Snyder from Clinton County and Dawson Osbourn from Highland County. Swine flu vaccines for exhibition was their chosen topic.

A total of $3,500 was awarded to this year’s team finalists.

This is a news release for use by journalists. Questions should be directed to Ty Higgins, 614-246-8231.

Editors: A high resolution photo is available to accompany this story.