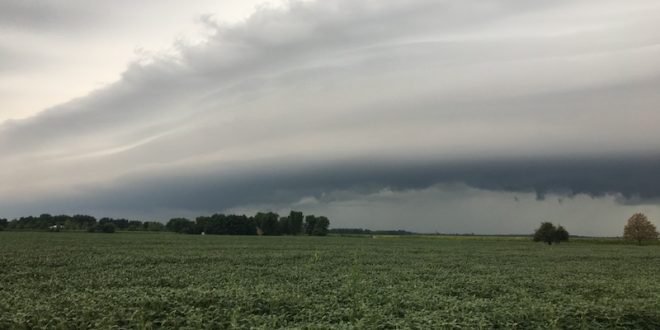 Final Indiana numbers are in from the eastern leg of the 2019 Pro Farmer Midwest Crop Tour. Indiana’s average estimated corn yield was 161.46 bushels per acre, down 11 percent from last year. Soybeans numbered 923.94 pods in a 3×3 foot square, off 29 percent year over year.

Day two of the Pro Farmer Midwest Crop Tour sees Ohio Ag Net’s Joel Penhorwood leaving Noblesville, IN and heading north before his particular route takes their vehicle west. They’ll end the day in mid-Illinois, recapping the day by getting final results from Indiana. Keep in mind the updates below are just from one route’s stops and may not necessarily be representative of the entire tour’s findings. Check back here at the end of Tuesday for full results.

Corn: Milk stage corn with a lot of potential, if things go right. Quite a bit of variability. In the three samples taken by scouts, kernels around were 12, 16, and 20. Is there more 20 in this field? Or 12? A major difference. 163 bpa from our sample.

Soybeans: Very small and far behind. Has yet to canopy and just doesn’t look good. Just 624 pods in a 3×3’ square. Herbicide damage very likely.

Corn: Some ear worm in two of the three sampled ears. Now getting into that beautiful black soil over this way. Starting to fire up, but shows hopefully what fields should be trending towards overall. 201.2 bpa corn.

Soybeans: A great big beautiful field with, as we’ve been seeing on most of the trip, great weed and insect control. 1,630 pods in a 3×3’ square. The scouts were impressed.

Corn: Very far behind in maturity. These had just pollinated and the trend of Indiana’s crop getting more mature further west doesn’t seem to be holding true across state lines. 102 bpa corn.

Soybeans: Parts of this field further out were starting to yellow, perhaps a bit soon. Could be a spot of SDS or nutrient damage.

Corn: We’re back into the blister corn now as we take our first field of Illinois. From the road, quite a few of these fields aren’t as good as I had thought for the second I state away from Ohio. But the Illinois part of the tour is still young. 121.5 bushel per acre field with low ear count.

Soybeans: This is a mature crop, but still setting pods. No disease, very clean, good field.

Corn: The final corn field in Indiana had major tip back, but was good on most other factors. 168.3 bpa.

Soybeans: This was an irrigated field, but something had happened that has caused nearly zero pods on these beans. Not good.

Corn: Full dough ears, starting to dent. This field wasn’t the healthiest we had seen, but population was strong. Tip back was strong throughout. The further west we go, the further along we are in maturity fairly consistently. 177 bpa corn.

Soybeans: Record amount on this side of the tour so far for this vehicle. 1,872 pods in a 3×3’ square. Beautiful soil. This was the last stop before rain started coming down and wind began picking up.

Corn: 164 bpa estimate here. A pretty rough field as far as health. Definitely nitrogen deficient and that has hurt yield. This corn is almost in dent.

Soybeans: Probably the prettiest soybean field we have seen with nice edges and great rows. Very clean and low pressure on the insect and disease side. Not enough though as it came at 924 pods in a 3×3’ square.

Corn: A fair amount of disease, but plant count was good. Plenty of very small ears that didn’t make it in the count. 188.25 bpa estimate here.

Soybeans: Nice looking field of beans that had plenty of pods with good fill. 1,641 pods in a 3×3’ square let this field boost to the top for the day.

Corn: Quite a bit of weed pressure in this field, along with bird and deer damage. Population lowered a bit as a result. Also some ear worm present, more so than other fields. 158.5 bpa estimate here.

Soybeans: Definitely mot the worst beans we’ve seen, but also not quite the best. A bit of insect pressure, plus these beans have put a lot of effort into getting tall (36”) than compared to others. 1,534 pods in a 3×3’ square.

Corn: A fairly heavily diseased field with plenty of disease above and below the leaf ear. Corn smut continues to be apparent. Overall unhealthy, though ear size seemed to be fairly strong. 166.6 bpa estimate. 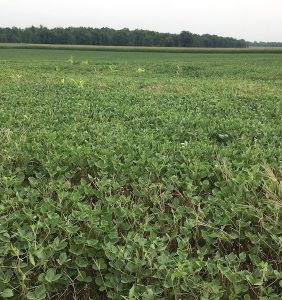 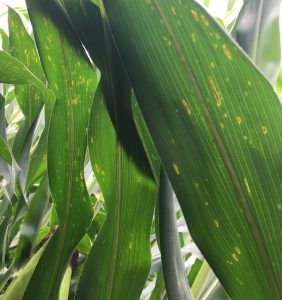 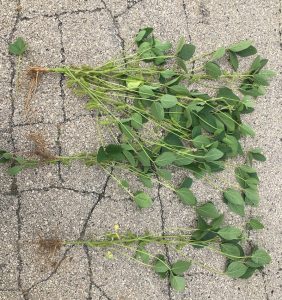 
Corn: Farther along than most we’ve seen that had some monster ears. Population was questionable. 172.6 bpa estimate. Spotty throughout and plenty of strange things in the field, including smut, tassel ear, and more.

Soybeans: This field had a crazy amount of pods coming in at 1,578 in a 3×3’ square. Second best of the day at the time of the scouting. The field did have an irrigation pivot in it, though these beans weren’t directly under its fire. 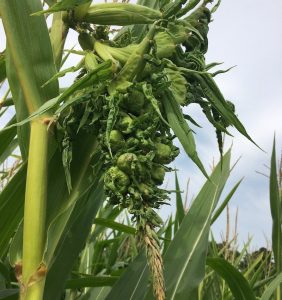 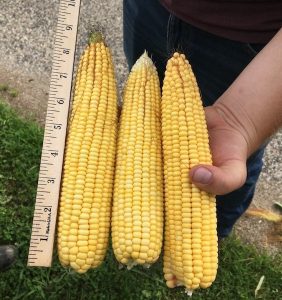 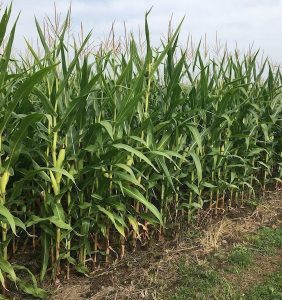 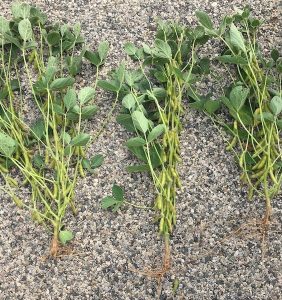 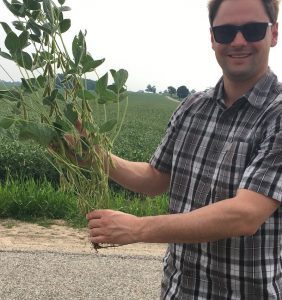 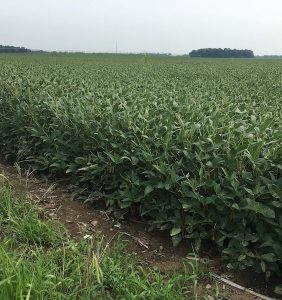 Corn: This field looked bad from the outside looking in, but we ended up in an area with fairly good population and ear fill. Some tip back will be had in this field, and there is some question as to if things will make it to maturity. These ears are in late milk stage, early dough. The rough yield estimate was 151.37 bpa.

Soybeans: Spotty population here. It looks like the farmer had some trouble with water and planting earlier in the year. We basically counted potential. Things were very immature and still blooming. Overall healthy, but very late. Bean count came in at 1,140 pods in a 3×3’ square. 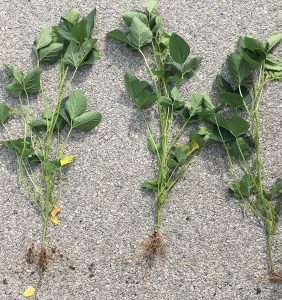 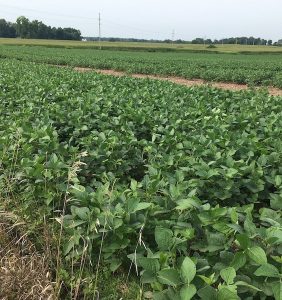 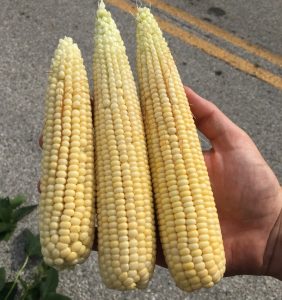 Corn: The farthest along corn we’ve seen with great ears in the dough stage to back it up. 192 bpa. It is starting to exhibit more disease pressure than others we’ve seen, a sign of the fields maturity to this point.

Soybeans: A whopping 1,638 pods in a 3×3’ square brings this stretch to a good number. The beans were special from the road, but really stood out in both their plant population as well as number of pods (and good pods) per plant. 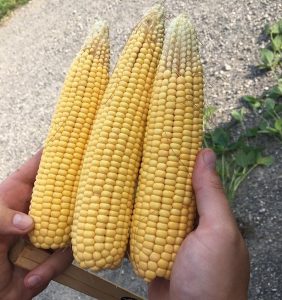 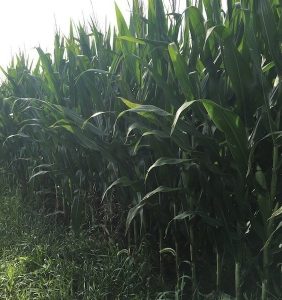 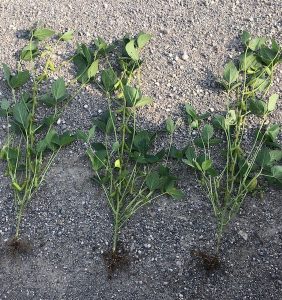 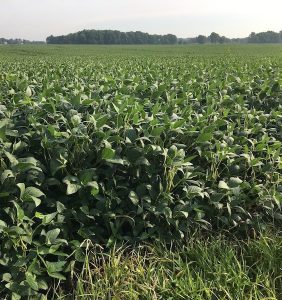 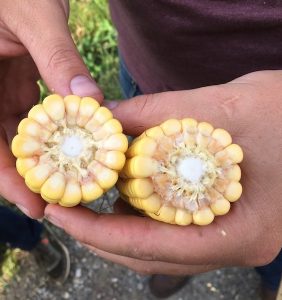 Corn: A number of double-eared stalks in this field, and surprisingly they are sharing well with their neighbor ears. This field is nearing dough stage and looks to end up nicely. 147 bpa average, which was a bit surprising, but ears only had 12-14 kernels around sampled ears.

Soybeans: A bushy field, though plant population appeared to be down. No disease or insect pressure to be seen. Flat pods and generally immature. 792 pods in a 3×3’ square. 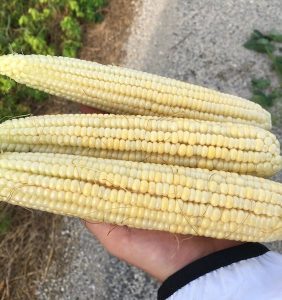 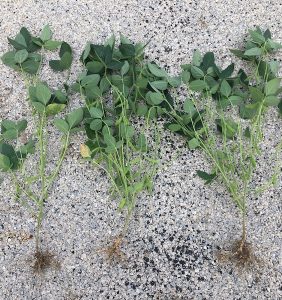 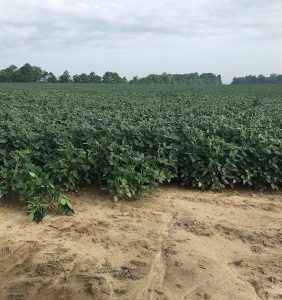 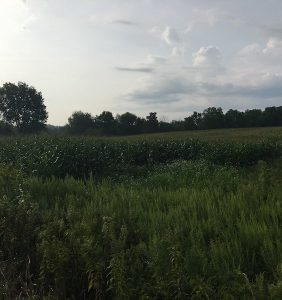 Corn: This was a good looking field of corn, but there were some drowned out spots as we walked in the field. This corn has great potential, but it is very immature. It has just gotten into blister stage. Estimated 140.5 bpa for the first stop of day two.

Soybeans: Sudden Death Syndrome starting to show on these beans. Short! 686 pods in a 3×3’ area. 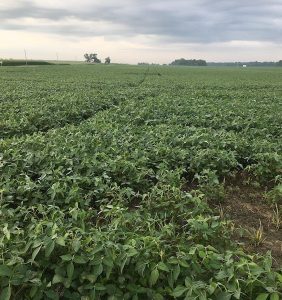 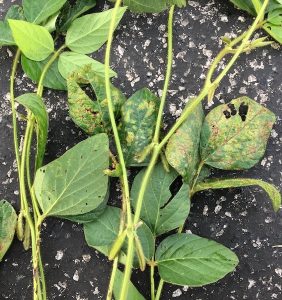 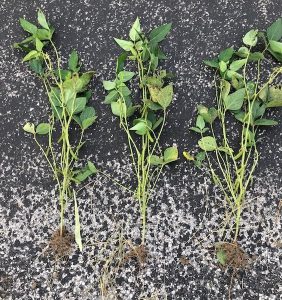 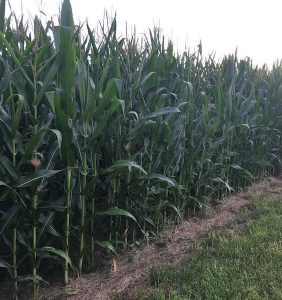 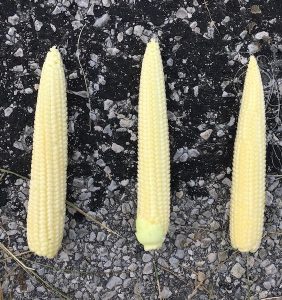 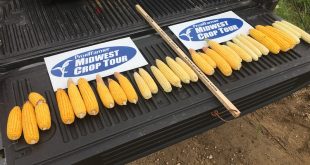 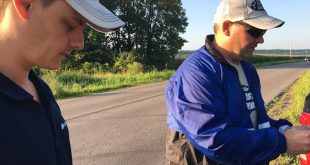 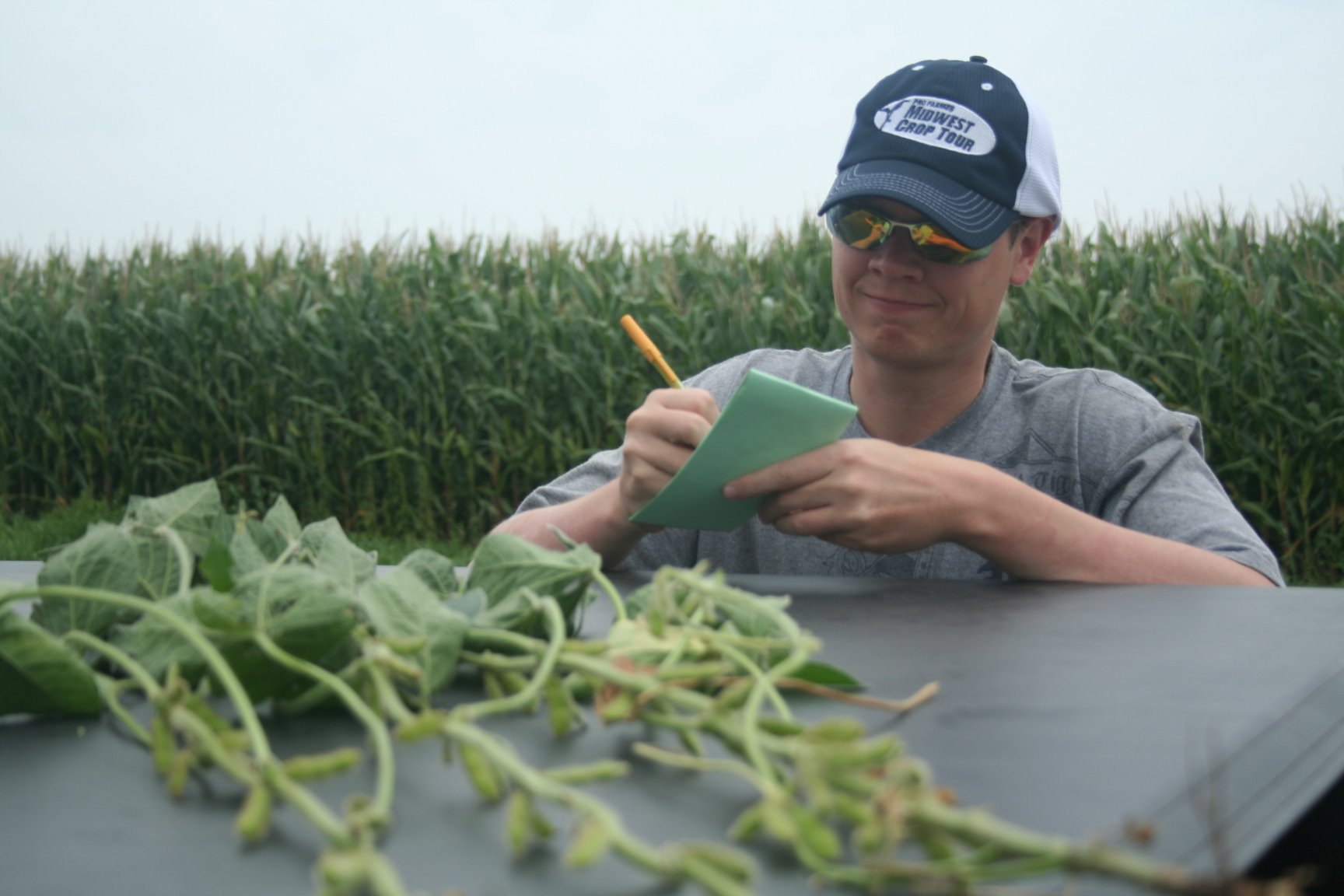