Cattle markets and the Tyson fire

The market is down one large harvest facility and cattle feeders cannot feed the same animal for infinity and beyond. As a result, availability of feeder cattle will increase in the near term. Packers continue to put the squeeze on cattle feeders as they appear to be holding all of the leverage. It is difficult to identify any leverage point cattle feeders control in today’s market, but this situation will not last forever. Similar to leverage slipping into the abyss, live cattle basis may or may not be favorable to cattle feeders as regional differences are the story on this subject. The kindest way to summarize the cattle feeder’s situation is that better days have to be on the horizon, but it is difficult to tell how far off the horizon is.

Since the Tyson fire was reported on Aug. 9, it is difficult to pick up on the fact in the initial numbers that a facility that has the capacity to harvest 30,000 animals a week is out of commission. Federally inspected slaughter the week following the fire was only 5,400 head fewer than the same week one year ago while the second week following the fire showed an 11,500 head increase compared to last year. Similarly, slaughter levels those two weeks do not appear to deviate from previous weeks. The picture gets a little fuzzy when looking at steer and heifer slaughter. There is only one week of official steer and heifer slaughter data to compare. That one week looks very similar to previous weeks, but steer slaughter was down 11,700 compared to the same week from a year ago while heifer slaughter increased 6,300 compared to a year ago. The picture will become clearer in a few more weeks, but the question already appears to be answered.

The calf and feeder cattle markets have worked their way out of the funk that was the Tyson slaughter facility fire. There was likely some fear and doubt in cattle feeders minds related to where they were going to go with cattle the next few months that knocked the yearling cattle market on its rear end for a week or two. However, that fear appears to have subsided as cattle feeders continue to look for quality cattle. 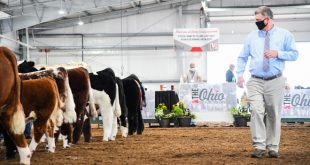