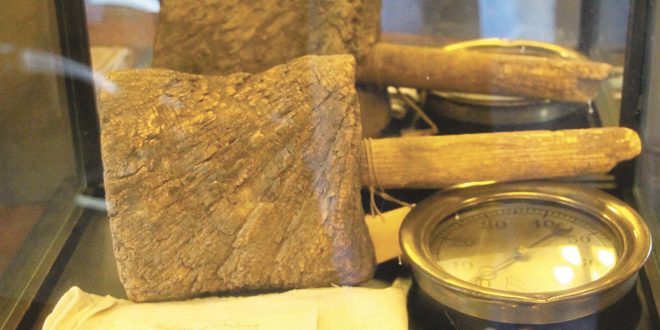 The original mallet used to drive pegs into the posts when the old barn was built almost 150 years ago sits in a glass display case near Glen Newcomer’s desk.

Faith, family and the future of Newcomer Century Farm

The original mallet used to drive pegs into the posts when the old barn was built on the farm almost 150 years ago sits in a glass display case near Glen Newcomer’s desk. The cabinet in the corner of his office is made from the logs that were a part of the first log cabin on the farm originally homesteaded in 1866 by Nathaniel Newcomer, Glen’s great-great-grandfather.

Six generations later, located just south of Bryan, Newcomer Farms is a cash grain operation that has diversified to include a seed dealership and crop insurance agency as a part of their business. The family does not need to look far to find history to help guide its future.

Nathaniel Newcomer was the second son born to Christian Newcomer, a minister who moved to Williams County from Lancaster, Pa. in 1840.

“Nathaniel purchased the land, cleared the timber, and built a log cabin, and then the barn, and a little later a brick house,” Glen said. “The barn was built in 1872, and the brick house followed in 1874.”

Following Nathaniel, the farm was owned by his son Harley Newcomer in the early 1900s. The next owner of the farm was Harley’s son Newell, Glen’s Grandpa, who was born in 1903. Newell then transitioned the farm to Glen’s dad, Lyman, who is now 85 and still visits the farm regularly.

“My grandpa (Newell) was a very humble man. He was very conservative. He grew up and started farming during the Depression. His whole emphasis was to pass the farm to the next generation, and be able to do it without having debt. His focus was on passing the torch,” Glen said. “The same could be said about my father (Lyman). He had the same philosophy.”

The family has been very proactive in generational transitions going back to his grandfather. In 1966, 100 years after the farm was originally purchased, upon taking the advice of their family attorney who happened to be a cousin to Newell, the farm became incorporated. N&L Farms, Inc. (Newell and Lyman) became a C-Corp.

“The idea behind forming the corporation was to allow the farm ground to stay intact, unlike many farms in the area which had the ground divided among the heirs as a generation passed. In this way, the farm could grow and be passed on to the next generation,” Glen said.

Fifty years after first becoming incorporated, the name changed to Newcomer Farms, and it became a S-Corp. Glen is now in the process of transferring ownership of some of the shares to his son Jason who is the 6th generation involved in the family operation.

Like most Midwestern farms in the 1940s, the Newcomers raised a variety of crops and livestock. Framed and hanging on Glen’s office wall is a copy of the “1944 War Food Program Farm Plan for Ohio,” which farmers were required to complete. This form was put out by the War Food Administration, Agricultural Adjustment Agency. At that time, Newell raised soybeans, corn, wheat, hay and oats on 140 acres. They also had beef cattle, milk cows, chickens and hogs. Looking back at the old records, “1943 was the first year my Grandpa raised soybeans. That year the corn yielded 61 bushels per acre, and wheat yielded 30 bushels per acre,” Glen said. Those yields were not bad considering no commercial fertilizers, herbicides, fungicides, or insecticides were available back then and early hybrid corn varieties had only been developed a decade prior.

Growing up, Glen remembers the farm being a more diversified livestock farm.

“Land was hard to come by,” Glen said. “We had chickens and cattle and hogs. Growing up, I fed livestock all the time. I was always doing chores around the farm, and feeding animals after school. The thought of taking an animal to the fair just sounded like more work.”

“He was a true cattleman at heart. Feeding cattle was what he did. Even his hobby was to feed cattle. He loved his Angus cattle,” Glen said.

Livestock remained a part of the farming operation until the 1990s.

“We still raised hogs throughout the 1980s when I returned to the farm,” Glen said.

Though showing livestock at the fair was not his thing, Glen remembers being heavily involved in both 4-H and the FFA.

“I would not be where I am today if it wasn’t for being in the FFA,” Glen said. “The FFA program in addition to being in 4-H have taught me leadership skills that I have used throughout my entire life.”

He credits learning skills like parliamentary procedure as being invaluable in the leadership roles he has filled. Glen has served as past president of the Fairview Young Farmers, Bryan Rotary Club, and also Williams County Farm Bureau. He has also served as a trustee for the Bryan Area Foundation and Defiance College. He served on the Bryan City Schools Board of Education for 20 years, and is currently Vice Chair of the Redline Equipment Board of Directors. Glen credits his high school business teacher, Doug Rupp, for having the greatest influence on him from a business standpoint. Glen said his high school FFA advisor Ray Woodring was influential in his decision to go on to college.

“He was the person that inspired me and encouraged me to go to Ohio State, ATI in Wooster,” Glen said. “While there I majored in livestock production, since we had livestock on the farm, and I was the assistant swine herdsman.”

Glen said the focus of the farm changed after he returned from college in the 80s. Upon graduating from The Ohio State University, Agriculture Technical Institute (ATI) in Wooster, Glen worked in agriculture off the farm for a short time before coming back to take over the operations. As the profitability for each of those enterprises changed, Glen evaluated each one and decided to go in a different direction.

“Up until this point, the diversity of different livestock and crop enterprises was the way that you made it financially,” Glen said. “Then we started growing seed beans for Pioneer. We have had a Pioneer agency for 36 years.”

He became a Pioneer sales agent after he got out of college and became more interested in agronomy than livestock. In 2001 they became licensed crop insurance agents to further diversify.

“We started in the 80s. My wife and I had to become diversified and find something profitable to get through that period of time. We still had hogs in the 80s, but in the early 90s we eliminated that enterprise to focus more on grain production, seed production and sales,” he said.

Glen and his wife, Ann, have been married for 36 years. They have three children. Their youngest son, Jason returned from college four years ago and is a part of the operation. The Newcomers have steadily increased their acreage over the past 18 years. Glen hired his first full-time employee 10 years ago and now has four. All his employees have been with him for 9 to 10 years, and he credits much of the farm’s current success to the dedication and commitment of his team. When Jason returned to the operation four years ago, Glen did not take anything off of anyone’s responsibilities.

“When Jason came back to the operation, we had him take on new projects and various items that I transitioned to him from a management standpoint,” Glen said.

Jason is leading Newcomer Farms into the technological future.

“Jason does all the spraying and soil sampling. He is in charge of all the record keeping for chemical and fertilizer applications. The technology he uses records this in real time. Jason does all the GPS soil sampling. We sample by management zones. Jason writes the prescriptions for variable rate fertilizer application, and variable rate seeding for our planters. The prescriptions are based on the soil test results and our yield goals. Jason also uses a drone for aerial scouting of the fields,” Glen said.

Another part of the Newcomer Farm team Glen created six years ago was a business advisory board. “One of the best business decisions I made was developing a business advisory board,” Glen said. “I recognize the value of having professional people outside of our industry looking over my shoulder. The board is made up of a retired CEO, a retired CFO, a couple attorneys, a CPA, and few others. They meet three times a year with my wife and my son and I to discuss the issues facing our operation. We also invite our lenders in on occasion to see the expert advice and the recommendations we are getting so they better understand why we do what we do. A few of the board members are older than me, and a few are younger. The younger ones are the people who will still be around to assist our son Jason when he takes over. These professionals can look at our farming operation as a business and tell me what I should be focused on. I look to them for solid business advice.”

When considering the rich past and bright future as the farm transitions to the sixth generation (and beyond), Newcomer points to Proverbs 22:1 that says: Choose a good reputation over great riches; being held in high esteem is better than silver or gold.

“If there was anything my father drove into me, it was not to boast, not to brag, and to be humble. Dad always said if you are successful, you don’t need to tell anyone. They can see it,” Glen said. “Remember your heritage and recognize the traits and characteristics that represent our family and got us to where we are: honesty, integrity, loyalty, faith, and family.” 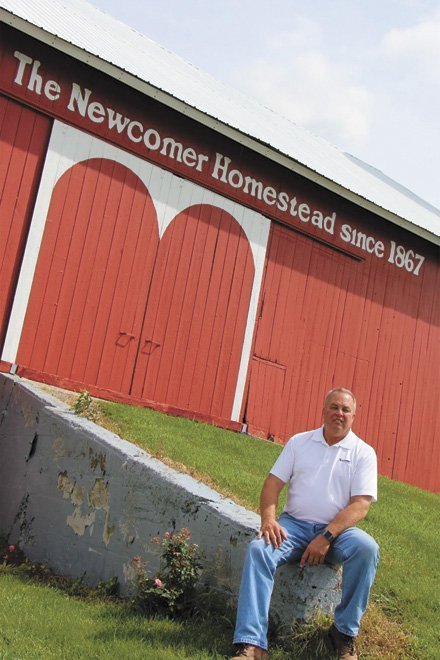