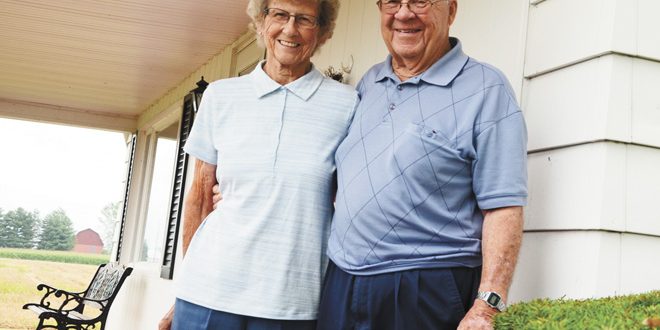 Jim and Dorothy Leslie had some tough years on their Wyandot County farm, but have found a way to make it work.

Jim Leslie was born in 1928, the youngest of six and 14 years younger than his next oldest brother. Being so much younger, as a boy Jim learned, mostly on his own, the hardships, joys and constant change of life on the Wyandot County farm purchased by his grandparents in 1882.

Jim still has scars on his foot from when he disobediently scooted his tricycle through the kitchen and put his foot in the hot, fresh apple butter his mother was making with neighbors. He can remember the community gathering on the farm and butchering for the winter.

“We used to butcher here at this farm for the neighborhood. We had a Model A Ford. We’d jack up the rear wheel and put a belt on the spokes of the wheel. We’d start the car, the wheel would turn and that would run the meat grinder,” Jim said. “We’d hang the meat in the summer kitchen. Mom would go out and slice the mold off the outside of the meat to cut out the steaks and cook them. We’d throw the moldy meat she cut off in the pigpen. People today wouldn’t eat that meat, but if you want a pretty good steak, that was good stuff.”

The days of his youth went slowly, but the years flew by, as did the changes on the farm through the last century.

“The farm is one field today, but at that time it was in six fields. We had a hog lot, we had a cattle lot and a woods with a pond in it. We had a well clear in the back so we could water the sheep. The cows were sold when my brother was in high school,” Jim said. “I can remember when they wired the house for electricity. I was in the fifth or sixth grade. We had one light in the kitchen on a wire that hung down from the ceiling, the same thing in the living room and one plug-in in the kitchen. I was sick home from school the day they turned the electric on and the lights came on in the house. That was a big deal. I can remember when they put the indoor plumbing in too. I was out of high school then. I didn’t enjoy running out to the outhouse in December. It was no fun to clean that thing out either. The first radio we had ran on batteries and that was a big deal too, but we only could get one or two stations.”

As much older siblings moved away from home, Jim took on more of the 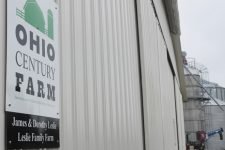 farm duties, especially after eighth grade when he got a Ford Ferguson tractor and a plow for Christmas.

“We owned 80 acres and rented other ground to get 220 acres. There were a lot of late nights and early mornings,” Jim said. “If you got 20 acres a day plowed with that Ford tractor that was a big deal from morning to night. Now our lawnmower has more horsepower than that Ford tractor.”

Jim’s father died when he was a senior in high school. It was just Jim and his mother at home. Times were tough, but Jim made it work as he took over the farm. The farm was rented out to cousins for a couple of years while Jim was in the service, stationed in Germany in the 1950s. Jim came home and the first thing he did was buy a farm.

“When I came home from the service, this farm was for sale at an auction. I paid cash and used all my money. Then I couldn’t get a loan to buy the seed and fertilizer. I was up a creek without a paddle,” he said. “I ran into a friend who worked with farm credit and they loaned me the money to plant crops.”

In 1957, Jim married Dorothy, a farmer’s daughter from southeast of Columbus.

“When we got married, we looked at the house on the farm I’d just bought and Dorothy said that we’d need to do something to the house before we lived in it,” Jim said. “So, we sold her car and put a roof on it.”

Their first years together on the farm were tough, and many people had doubts about whether the Leslies could prevail. Jim’s mother still lived at the home farm, but was getting elderly and needed care as well.

“The first couple of years were tight,” Dorothy said. “The first year we were married was the only year we didn’t get everything planted. It rained and rained and rained. I would go out barefooted to pick the garden because it was too muddy to wear shoes. We were on our own. Either we made it or we broke it. We had no family to help us. It was do or die for us. We were going to make it go or try something else.”

Even when the crops didn’t grow, the bills had to be paid.

“My mom didn’t have any income except for the farm. I bought the farm from her so she had that money and we took care of her. Dorothy is a registered nurse and she kept us in business for a while,” Jim said. There were a couple of years there that lenders told us we should maybe look at different options of things to do, but we got the job done. There wasn’t a choice. We just did it. With Dorothy’s help, things worked out. I can’t stress that enough.”

After years of constant toil on the farm, things finally started looking up and Jim was really coming into his own as a farmer in 1965. It was late winter of that year though, when life took another challenging turn that set the stage for the future of the farm.

“I was driving home from bowling on the church bowling team one night. A drunk ran me off the road and I rolled the pickup truck multiple times. There were no seat belts in those days. My back was badly hurt and my scalp was peeled open and laid over,” Jim said. “I was too injured to plant the crop that spring. It was pretty discouraging.”

The Leslie’s previous perseverance on the farm, though, had made an impression on the community.

“Our ag credit manager asked me what we were going to do. I told him I wasn’t sure, and a few days later he came out and worked the ground and planted oats for us. That same year, around 20 farmers in the community got together, brought all of their own equipment and helped plant everything else for us all in one day. There were so many tractors out here. We were buying fuel from the Marathon Corporation at that time and they supplied the fuel for the tractors that day. I never got a bill for the fuel that was used. The wives all fixed dinner. We set up tables in the backyard and all of the wives made food. They stopped for lunch and at about 6:00 they were done planting everything,” Jim said. “The Ford dealer in Upper Sandusky even brought out a little Ranger so I could drive around the farm and see everything. Another neighbor came out a day early to get stuff all lined up.”

That day changed the farm, and the farmers.

“They didn’t expect anything back,” Dorothy said. “How do you thank someone who does that for you? Farmers still do that today. I don’t know how many places do that anymore.”

“I vowed after that that I would help everybody else out. I never made it around to help everybody, but I have gotten the chance to help many of them. We have tried to help families in a lot of ways, but we don’t like to make a lot of to-do about it,” Jim said. “It gave us a boost and we managed to pay our bills that year. I was still wearing a body brace for harvest that fall and I had some part-time help come in. I don’t remember how the crops were, but we paid the bills and had money to put out the next crop. We were able to rent more ground after that and grow the farm.

“It went from an old general farm to a commercial farm. Every year there is always something new and the last 10 years things have really changed. Now you need a book to know how to run this equipment. The physical stress now is a lot less. The technology has been a big thing. No-till has been a big change too. We plant all of our soybeans and wheat in no-till and there is minimal tillage for the corn. No-till has been a godsend for us. I’ll be 91 in October and I’m still able to go out and run the tractor and do a lot of work. That is where the technology has come in. If I had to do things the way we used to do them, I couldn’t do it. It has been a miracle. The combine cab is air conditioned and it drives itself.”

The Leslies have four boys and three of them live nearby and work on the farm.

“The farm is a good place to raise children. They learn responsibility and accountability, even though you get tired you don’t quit, you just persevere until the job is done,” Dorothy said. “Watching the sun rise and set with family leaves a lasting impression on all of us.”

With rented ground, the farm expanded to over 2,000 acres through the years. This spring was the first since 1957 where some of the farm’s acres were left unplanted because of wet weather. The Leslies know they have been lucky, but there is more to a successful Century Farm than luck.

Jim said looking at Dorothy with the sincerest of grins, “You need a wife that’ll stick with you.”

Dorothy returned the grin and said, “You have to have faith. He said He will give a time to plant and a time to harvest. Where there is a challenge, you can’t just give up. That faith and persistence has worked for us all these years.”