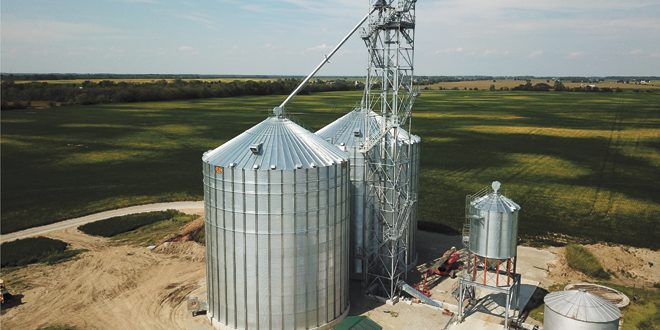 R & C Rivers Farms has 850,000 bushels of corn storage capacity at their main operation in Mount Sterling. But for soybeans, they’ve relied on 30 smaller bins at their other farm sites in Pickaway, Fayette and Madison counties.

“It wasn’t a very efficient system and made hauling the grain too complex,” said Brent Rivers, the owner. “So, we decided to build a new soybean grain system to be more productive.”

Designed and built by local GSI dealer, Sims Construction, the new system is located about a quarter mile away from the main operation. It includes:

“The new GSI system will make this year’s harvest a lot more convenient, especially for our truck drivers,” Rivers said. “It’s actually like adding an extra truck or two because they will be able to dump their grain more quickly and get back to the field faster.”

As for the existing soybean bins, he plans to continue using some of them and rent out the others.

The soybean system was also designed to allow for future expansion, which Rivers estimates may be necessary in about two years. The layout includes a footprint for two more storage bins, each with 160,000 bushels of capacity, a wet storage bin and a grain dryer.

Like many farmers, Rivers has traditionally let his soybeans dry down in the field and relied on aeration fans rather than using a grain dryer. But that trend is changing, as more producers see the benefit of drying their beans.

“With the wet weather pattern we’ve had the last year or two, there’s a big advantage in having a dryer,” Rivers said. “It will provide the flexibility to get my soybeans out of the field faster and improve overall harvest efficiency.”

Rivers said he’s pleased with how the first phase of the project turned out and how it will make his 2019 harvest season run a lot more smoothly.