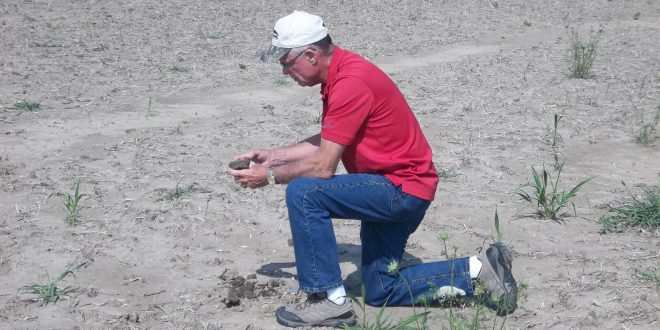 Joe Nester has spent time this summer assessing the challenges created in the soil from excessive rains.

Repairing the soil after a record-setting 2019

It is no secret that 2019 will go down in the history books as one of the most challenging years for production agriculture in much of the country. Flooding and frequent rain events delayed and, in many cases, prevented planting on millions of acres across the Corn Belt.

“I’ve never seen anything like it, this is a year for the record books,” said Joe Nester, a certified crop advisor from Williams County who has worked in agriculture for over 42 years and as an independent consultant at Nester Ag for the past 28 years. “We went into the season already wet, and then had rain every other day. Even the crops that were planted are not going to yield near what farmers typically expect.”

He estimates that of the acres they work on through Nester Ag, at least 65% were not planted. Statewide in Ohio there were 1,485,919 prevented planting acres in 2019, with the bulk of those in the northwestern part of the state, according to the USDA’s Farm Service Agency.

“Typically, we see this happen in pockets, but never this widespread,” Nester said. “This was the first spring we had three separate weeks we couldn’t even find a place to soil sample because it was just too wet. I probably have more questions this year than I have answers.”

Soil quality and soil health are extremely important to Nester’s brand of conservation-focused farming, and he stresses it with all his clients. Regular soil sampling is a foundation to the work he does. Nester works with farmers to develop a plan based on the results of their individual soil test results. This year was so challenging that he even sampled some fields twice.

“We sampled the fields the first of May, and then had all the rain and flooding. We knew this was not good for the soil, but wondered if we could quantify any change, so we re-sampled the same locations the first of July,” he said. “In those 60 days we found that the calcium numbers declined 10% and the potash numbers dropped 11%. You have to know where your phosphorus and potassium levels are going forward — it’s a must.”

weakened the negative charge in the soil, and the calcium and potassium leached out of the top four inches of the soil, and into the subsoil. As they pulled the soil samples, they found that the hard clay had turned into chunks like a road bed. Nester thinks that when the calcium leached out, it left the topsoil with a higher magnesium-calcium ratio which enabled increased soil compaction.

“The saturated soils’ lack of oxygen killed-off a lot of the microbial life,” Nester said. “And with the heat we experienced in July on the bare soil, we literally baked the crust and microbes.”

Nester took a temperature reading on one of those 100-degree days and found that the soil surface temperature was actually 130 degrees Fahrenheit. In the absence of a crop to canopy and shade the soil, the temperatures rose higher than normal, which was detrimental to the soil life. Without a cover crop’s root growth, improved soil microbial health and ability to hopefully pull some of the calcium and potassium back up into the topsoil this year, Nester thinks 2020 will be a “recovery crop year.”

“Farmers need to try to establish a cover crop which will cover the soil to provide shade to keep it cooler, and also grow the roots to break-up the soil compaction,” he said. “This season the microbial population took a severe hit. Where your microbial life goes depends on where you started. Microbial life can come back relatively quickly if you have some to start with. Even planting treated soybeans can be used as a cover crop and will help.”

Different seeding techniques may be needed based on the soil conditions.

“Some farmers may need to use vertical tillage to fracture the soil ahead of attempting to plant a cover crop. Others may be able to broadcast the seed and then incorporate it with light tillage,” Nester said. “Others in tough situations may need to use a no-till drill. Timely planting of cover crops is a key in successful establishment. Farmers should have time this fall on the prevent plant acres. If crops did get planted late, though, the opportunity for cover crop may be slim.”

Weeds also become more of a challenge without cover crops. The main concern at this point for farmers is to make sure the weeds do not go to seed. The use of 2,4-D is a good option he said, but farmers need to be aware of the replant restrictions if they intend to plant cover crops soon.

“Weeds do not make a good cover crop. They do not promote good soil quality,” Nester said.

“Spraying, tillage, or chopping all are options for preventing seed production,” Loux said.

Beyond this fall, prevented planting acres from 2019 will require careful consideration. Many variables in the fields have changed in the past few months. Soil tests need to be done or possibly re-done, and plans may need to be modified. Nester is also concerned regular soil testing will fall behind since there was very little opportunity to sample last fall and this spring due to the weather, and with the late planted crops, there my not be much opportunity in the coming fall after a late harvest.

“If you had a cropping plan in place for 2019, you can’t just hit the pause button now and then resume next spring,” Nester said. “Soil test results may actually have changed more as a result of all the water than they would have from growing a crop this year.”

With reliable soil test results serving as the basis, implementing variable rate technology with the use of management zones can save money, place the nutrients where they are most needed and can be used most efficiently with minimal risk of loss. Nester uses strip-tillage combined with variable rate technology as an example. Utilizing a prescription from the soil test results, the variable rate application will make sure that the correct amounts of nutrients are applied in the right zones, and the strip-tillage will put it in a place where it is less likely to leave the root zone and more likely to be used by the plants. This can be especially economically advantageous for phosphorus and potassium.

“This year after all the rain, potassium levels may also be in the tank,” Nester said. “Studying those soil test results, and looking at any drop in the potassium level is also important. This also can be addressed with the variable rate application combined with strip-tillage.”

Nester also recommends that farmers try to stick to their crop rotation as much as possible.

“Most rotations have been altered based on what was fit, or wasn’t fit to plant and the date on the calendar this spring,” he said. “Try to get your rotations back in order.”

When it comes to getting the soils back in shape, Nester suggests considering variety of practices.

“As farmers attempt to help their soils recover, there is no silver bullet,” he said. “Practicing basic agronomic fundamentals is going to be the key.”

This has definitely been a year for the record books. In 42 years, Nester has never seen a year like this one, and hopefully won’t see one challenge that record anytime soon.

LINCOLN, Neb. (DTN) — Even if agricultural facilities are designed to avoid wastewater discharges, a …