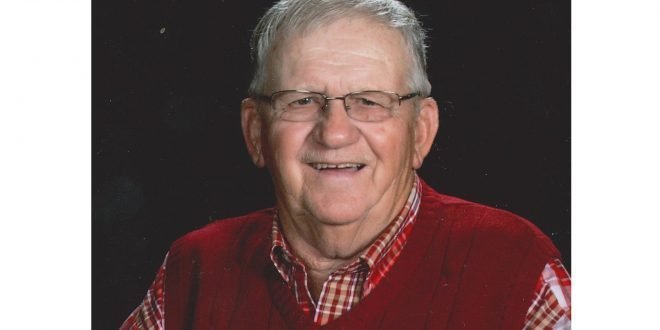 Crawford Antique Farm Machinery Association nominated Scheffler to receive this award for his service as a Crawford County farmer, his many other accomplishments in Crawford County and the state of Ohio, and his volunteer work with Crawford County youth.

Scheffler raised corn, soybeans, wheat, oats, hay, cattle and hogs in Crawford County. He served as a committee member of the Crawford County FSA, served on the Board of Directors for the former Zeigler Milling Company helping farmers to make decisions, and was a trustee for the Crawford Antique Farm Machinery Association. Scheffler served as a Crawford County Cattlemen’s Executive Board member and also helped form the association as a charter member.

He also served on the Junior Fair Beef committee, helping 4-H and FFA youth with their projects and sold club calves raised on his farm. He was integral to starting a car lot class at the Crawford County Fair.

Scheffler served more than just Crawford County during his lifetime. He worked membership for the Ohio Cattlemen’s Association, worked during state fairs in the beef stand of the Taste of Ohio Café and showed commercial beef heifers at the state level for many years. He had the Grand Champion Pen of Five Beef Commercial Cattle at the 1980 Ohio State Fair. He received the Crawford County Cattlemen’s Beef Industry Award in 2004 and the DeKalb Yieldmasters Club award in 1978. He was an honorary member of the Wynford FFA.

Locally, Scheffler was involved in a number of several civic organizations, served as a Holmes Township trustee and was member of Good Hope Lutheran Church. He was a Crawford County Farm Bureau member for several years and was on the building committee for the CAFMA.

This year’s recipient firmly believed God created him to be a caretaker of this Earth’s soil and water and to provide food and clothing for the next generation. By being raised in a farming family, he knew how important it is to produce food and fiber and to use his knowledge and actions to preserve agriculture.

Applications for the 2020 Crawford County Agricultural Hall of Fame inductees will be available at crawford.ofbf.org next year. Nominations may be made by an individual or organization to recognize a farmer or breeder or someone in the agricultural industry. Up to two awards will be available each year.