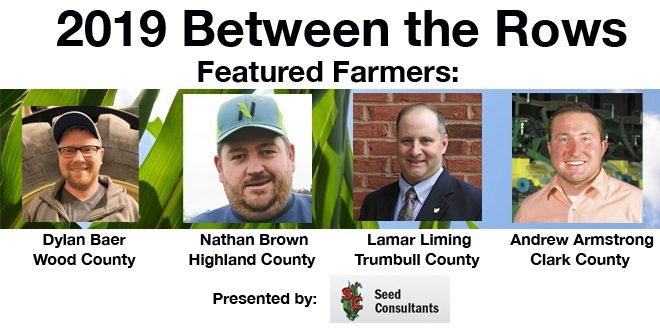 Harvest moving forward for Between the Rows farmers

We are pretty well wrapped up with our soybeans. We have shelled a little bit of corn but we still have quite a ways to go with that.

Our beans were 8 to 10 bushels off of what they normally are. We did spray one or two fields with fungicide and those fields were yielding what we normally would see. So this may have been the year to spray fungicide and we suffered a little there.

The first soybeans we cut were on the dry side and the last load came out at 12.6% moisture. We’d cut soybeans for two days and then we’d sit for a week. The replants were planted the first part of July and didn’t come to maturity until the frost — that held us up.

So far the corn we have shelled has been wet. The driest we have shelled so far was 18% to 19% and that was the first that was planted. The highest has been 26% moisture. Yield wise everything seems to be on par with where we should be on corn. We did spray fungicide on all of our corn ground and it is looking good. We are hoping to get another good couple days before more rain sets in.

Most beans around here seem to be pretty well wrapped up but there is still a lot of corn to go. So far the corn is standing well.

We flew some cover crops on the first part of September and we have gotten a couple of good rains in the last few weeks that have really brought them on. Everything we have harvested has cover crops on it now. We have our wheat sown Oct. 8. It is up and looks good, with a good stand and good color. We also planted some cover crops with a Turbo-Max with vertical-till machine and a seeder.

It has been a rather delightful fall compared to last fall. Bean yields were down a little but we are pretty tickled with what we have. We have also still had some heat to bring things along this time of year. We have been grazing some of our summer cover crops with some feeder calves and we have been happy with their gains.

We finished beans the beginning of last week and got the wheat in before that on the corn ground we chopped. We got done chopping but haven’t started shelling corn yet.

The beans were below average, but for the year I was alright with it. The bean yields were anywhere from 35 to 68 bushels, but that is what we were expecting. Test weight was average and they dried down pretty well as late as some of them went in.

The wheat is coming up and is not bad. I got it in around mid-October and we’ll just see what happens there.

Around here there are some guys further ahead on corn than I am and there are still quite a few beans in the area that need to be taken off. We have not gotten a lot of rain the last few weeks, but we did get .9 over the weekend. This corn going in late last spring is still holding quite a bit of moisture. It was windy here yesterday but not that bad. The corn stalks are generally in pretty good shape.

We are in good shape on feed for the cows. We have plenty of hay and the silos are both full. The quality is down so we’ll see what that will do for production moving forward.

We got an inch of rain Saturday and we are are right on track with an inch a week. We did manage to get our beans finished on Thursday night and we got caught up on some tillage before the rains came.

We were pleasantly surprised with the beans. Looking back, we maybe should have planted more beans. I think we will average between 50 and 55 across the board. I think our worst was 42 and our best was 58 or 59. We heard about some 60-bushel beans out there. We have had normal years where we planted in May where we only averaged 50-bushel beans so we can’t ask for much more than that. The last field we planted was on June 30 and it was our best field that went 58. We don’t know where that came from.

We were able to get some sunshine this fall and it helped. The average moisture was around 14% and the quality was fine. Some fields had some good bean size to them and good test weight.

We are looking forward to trying some corn the next dry spell we get. It won’t take us long to get that out. It has been a weird fall with limited acres on everything. We have been able to take things field by field and get them ready for next spring. We have only had spotty frosts, but it sounds like this week temperatures might fall off a little bit.

The first round of wheat was planted Sept. 20 and it looks great, but we are almost worried about it getting too tall. We planted more around Oct. 8 and 10 and that wheat is also off to a good start.

Harvest went well and we were actually able to finish a week ago Sunday. There was one day we weren’t able to run because of rain and that was it. We had another rain that soaked right in because it was so dry. We ran pretty hard and some of the corn we shelled was up to 24% and 25% moisture. We were able to lock in propane pretty cheap and had to dry some. We did leave a field at the beginning and came back to get it. We did not dry any soybeans. Most of them were around 11% moisture. There were parts of some fields where the beans were a little green yet where it had laid wet or got replanted. The blend is your friend — that is what we always say.

We started with our most southern fields and we were pleasantly surprised with the results. It was not a record-breaker for corn, but above average. The beans were a little below average overall.

For beans we had fields in the high 50s on down to 30s and 40s on the low side. For corn, it was everywhere. We had some close to 200 on down to about 140. We were really fortunate just to have crops to harvest, honestly.

We did a little bit of fall tillage where we tiled a field. We got equipment cleaned up and put away. 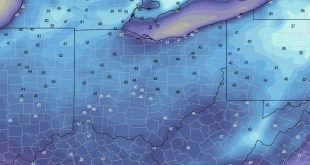 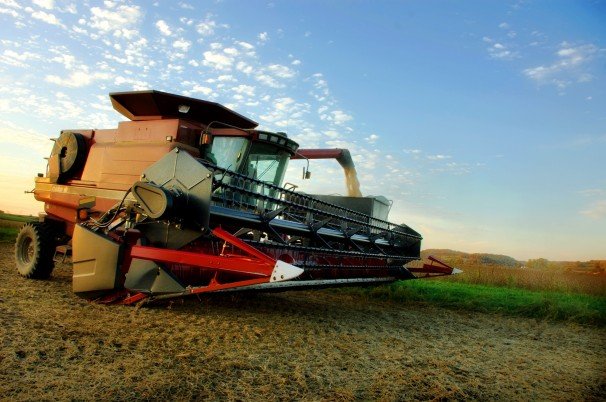 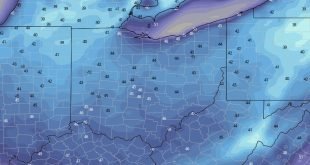 September 17, 2020 -- Cooler air is on the way to Ohio today. It will be a slow transition over the state, as the front needs to work through from NNW to southeast. But, we will see signs through the day...