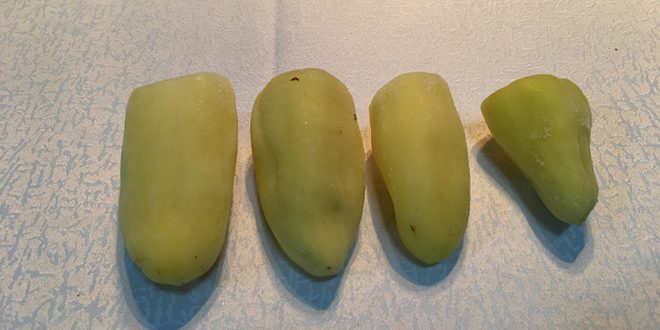 Have you taken your Vitamin C today?

By Judit E. Puskas and Carin A. Helfer

Vitamin C is an essential ingredient for all living creatures. In humans, it is necessary for proper working of many biological processes, including intracellular respiration, i.e., the ways that cells transform nutrients into energy through a complex series of reactions. Albert Szent-Györgyi, a Hungarian biochemist, is credited with first isolating Vitamin C from adrenal glands while completing his Ph. D. thesis at Cambridge University in 1927. At that time, he did not know what the substance was — so he called it “hexuronic acid.”

The story of discovering Vitamin C is quite fascinating. Szent-Györgyi began investigating plant respiration, specifically the phenomenon of browning. Some plant tissues turn brown rapidly when cut and exposed to the air — everybody knows this from cutting up an apple. Plants containing certain chemicals known as peroxidase enzymes (for example, cabbages and citrus fruits), however, resist browning. Szent-Györgyi also wondered if the skin-bronzing characteristic of Addison’s disease — caused by failure of the adrenal glands — was related to lack of a browning-preventing agent. Working with beef adrenals, he found an analogous substance present in large amounts.

In 1931, Szent-Györgyi became chair of the medical chemistry department at the University of Szeged, Hungary. Then, he found that the Hungarian yellow peppers had the highest concentration of Vitamin C, which enabled him to isolate

sufficiently large quantities of “hexuronic acid” that became identified as Vitamin C. He named the compound “ascorbic acid,” that is, the compound that prevents and cures scurvy (“scorbutus” in Latin). Sailors developed scurvy, which killed over two million of them between 1500 and 1800, on long-haul trips when fresh vegetables and fruits were not readily available.

Szent-Györgyi won the Nobel Prize in “Physiology or Medicine” in 1937 for this discovery. Vitamin C is not stored in the body well and must be ingested daily from food or supplements. Linus Pauling, who won two Nobel Prizes, started to advocate for taking megadoses to prevent the common cold and even some chronic diseases and cancer.

Regarding cancer, which is characterized by rapid cell reproduction, Szent-Györgyi sought to understand not why cancer cells grow, but what stops normal cells from proliferating, except when it is required. He suggested that the regulatory mechanism had originated very early in the earth’s evolution; early living systems, before light and oxygen were available, existed in an “alpha state” in which their main functions were fermentation and proliferation. Oxygen changed everything, making proteins reactive and enabling them to link together in increasingly complex systems, reaching a “beta state.” Cells in the beta state, he said, resist proliferation partly because they are complex, and partly because they utilize compounds to facilitate energy transfers between molecules, and thus carry out normal functions. When an imbalance develops, the cell regresses to the alpha state and divides. This imbalance might keep the cell permanently in a proliferative state, i.e., cancer. Therefore, according to Szent-Györgyi, anything that disrupts the balance might push cells into the alpha state. He also believed that a Vitamin C salt (ascorbate) played a crucial role in maintaining the “beta” state.

Szent-Györgyi’s theories now may have a rebirth. In a 2018 article in the journal “Frontiers in Physiology”, Margreet C. M. Vissers and Andrew B. Das wrote: “Recent discoveries have expanded our knowledge of the biological functions of ascorbate, and have highlighted a number of interesting hypotheses that suggest there is a good rationale to investigate the feasibility of using ascorbate as an adjunct treatment for cancer.

“Clinical studies underway will help identify which patients might benefit from ascorbate treatment. Given its lack of toxicity, ready availability and low cost, it is our hope that good information on the mechanism(s) of action will aid translation of the new information into clinical practice.”

The Puskas lab is hoping to discover new options of using Vitamin C in cancer treatment.