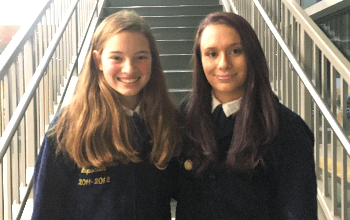 Share
By Caleb Isler, Chapter Reporter
North Union FFA members, Kendal Walczak Music and Kaylee Smith, competed at the District level in the FFA Job Interview competition in late November. Both members had to place high enough at their sub-district competition to earn the opportunity to compete at Districts. Kaylee Smith won District runner-up.
Smith, who is currently a Junior at North Union, has competed in the Job Interview competition since being a freshman. This is her second district runner-up title, and she has also previously been district champion, which earned her the opportunity to compete at the state level last Spring, where she placed 3rd at State.
The Job Interview CDE is an individual event in which participants learn and demonstrate employment seeking skills. The students are tasked with creating a resume with references and a cover letter. Then at the competition, they complete a job application and sit down for a personal interview. Lastly, they conduct a telephone interview and follow up correspondence to finalize the competition. Participation in the Job Interview CDE gives students the opportunity to learn real world skills that everybody will need at some time when seeking employment in their future.
Share

National FFA Convention through the eyes of a delegate

November 26, 2021 -- We expect clouds to thicken tomorrow afternoon, especially in the NW quadrant of the state, and scattered rain showers will arrive late afternoon and evening...