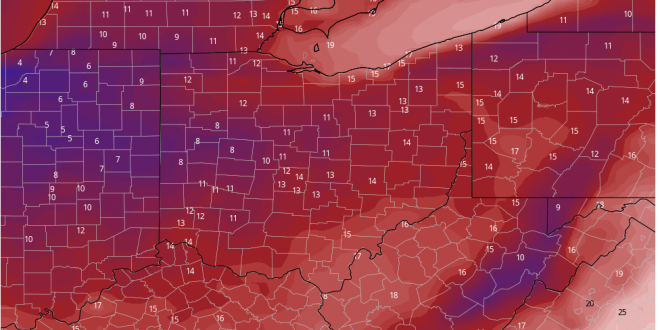 No major changes in the forecast this morning but rather just a few tweaks here and there. We should be partly sunny and not as cold today. We hesitate to call it “warmer” because there will still be a chill in the air, but the NW flow that has dominated the past couple of days is easing for today, and we will benefit from some sunshine again. Tomorrow we expect a mix of clouds and sun, but will skew that with better sun chances north while over the southern third to quarter of the state, we see more clouds and cant rule out a couple of scattered showers. Coverage will be 60% or less over that southern third to quarter of Ohio and moisture totals are minor at a few hundredths to a tenth or two, but we still cant guarantee a dry day tomorrow. This comes as a trough boundary sags through the eastern corn belt, and it will bring colder air for Friday too, particularly in the afternoon.

Our weekend is dry, with mostly sunny skies on Saturday. Then on Sunday we see plenty of sun to start, but clouds can build in the mid to late afternoon time frame. However, we do see a significant warm up. If there is any day that can be above normal on temps in our forecast this morning, it would be Sunday. South flow dominates ahead of our next frontal system’s arrival.

That front remains right on schedule for Monday. Rain showers break out over the state and continue into the evening. Cold air will be blasting into the state behind the front, and this morning, a minor tweak to our forecast is that we think there still will be a bit of moisture holding on when that cold air comes in, especially given the overnight timing. Therefore, we are going add the likelihood of rain ending as snow overnight into early Tuesday morning in a large part of the state, at least central and north. However, we are not projecting any significant accumulation potential at this time…stay tuned. For the balance of Tuesday, after the morning snow shower or flurry potential, clouds will work to give way to sun. But, we are looking at much, much colder air coming in. The flow will be strong out of the NW. 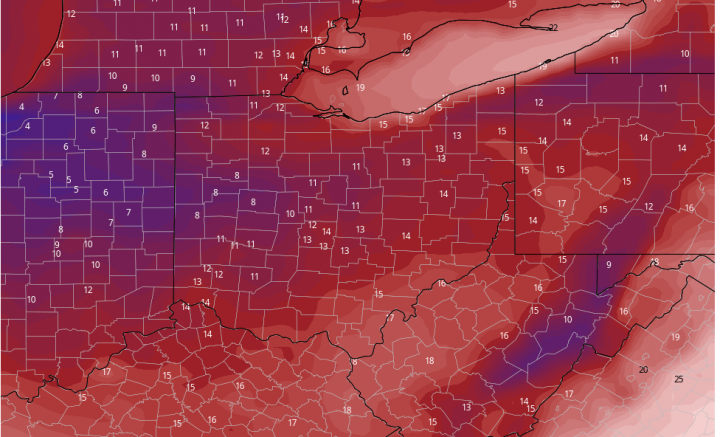 Partly sunny and very cold Wednesday, remaining cold Thursday. Temperatures will likely be well below normal for those days. The map at right shows Wednesday morning lows. We don’t bounce from these levels very fast!

For late next week on Friday, we have another chance of moisture coming across the state. The cold air never really leaves, though, so we are switching over the precipitation type in our forecast to snow for Friday with 70% coverage, and the potential for some minor accumulations. Liquid equivalent precipitation would be a few hundredths to .3″. While we see better potential for sun on Saturday the 14th, we still likely see flurries over the state with 40% coverage. No additional accumulation there.

The extended period is drier now. We see good sunshine for Sunday the 15th, but then we are bumping our next front forward a day. WE have rain showers moving across Ohio on Monday the 16th with potential of .05″ to .4″ totals and coverage of 70%. The system is done by Tuesday, and we stay dry for the rest of the period through Thursday the 19th. On Friday the 20th we see shower potential over central and eastern Ohio with 60% coverage. 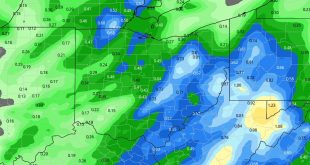 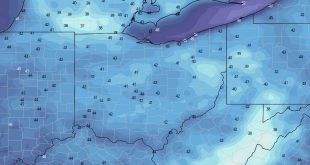 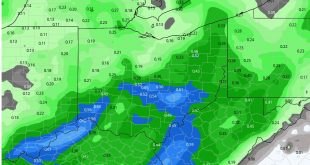