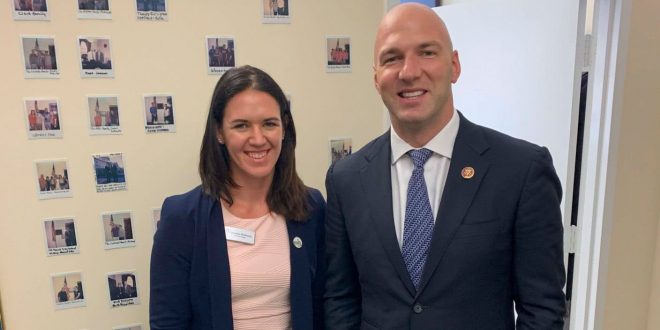 Advocacy put into action after visit to D.C.

When Farm Bureau member Christina McDowell traveled with OFBF to Washington, D.C. in September, she knew informing lawmakers at the highest levels about the needs of farmers was going to be an important part of the experience.

What she didn’t know is how much her influence would be taken to heart by Rep. Anthony Gonzalez, who is a first-term congressman representing Ohio District 16.

“We had just come from a rally to support USMCA to Rep. Gonzalez’s office,” recalled McDowell, a Young Ag Professional in Medina County. USMCA is the new trade agreement between the U.S., Mexico and Canada that has yet to go into effect. “(Our small congressional group) talked about trade and the need to support our farmers (with Gonzalez).”

At the end of the meeting, McDowell handed Gonzalez an “I Am More Than My Farm” business card with information about mental health resources. The business card is part of a broader coalition between Ohio Farm Bureau, Ohio State University and the Ohio Department of Agriculture to draw attention and provide avenues of help to farmers and their families who are struggling with mental health and potential thoughts of suicide.

“I am a crop adjuster,” McDowell said. “I see first-hand what stresses farmers are under.”

That gesture definitely made an impact. Gonzalez and co-sponsor Rep. Ben McAdams of Utah introduced the bipartisan Advancing Research to Prevent Suicide Act in October. The legislation directs the National Science Foundation to fund competitive research grants across a range of disciplines and in early career research with the goal of increasing understanding of the root causes of the rising suicide rate in America.

While veterans and children were mentioned in the announcement of the bill, it was Gonzalez’s visit with Ohio Farm Bureau that sprung his team into action.

“We all know we have a mental health crisis in this country,” Gonzalez said via a YouTube video update from his office in mid-October, “but where this really hit home for me was… when I was talking to someone at the Ohio Farm Bureau.”

Gonzalez goes on to recount how McDowell handed him the business card and told him that finding a way to help prevent farmer suicides was a big initiative of the organization.

“It was the first I had heard of that specifically in the agriculture community,” Gonzalez said. “That’s when it really hit home for me that this is hitting every single area of our country and our region. What is happening is unsustainable and it’s sad.”

That kind of penetrating advocacy is something McDowell is grateful she got to do on behalf of farmers through the Ohio Farm Bureau and its sponsorship of the trip.

“We need to advocate for ourselves – 98% of the population doesn’t touch ag. We need to bridge that gap,” she said.

“The mental health issue seemed to be very much on (the congressmen’s radar), but I think he looked at it with a new perspective (at our meeting). It is nice to be able to bring the light of ag to people who are not necessarily involved in ag.”

The Advancing Research to Prevent Suicide Act passed the House Committee on Science, Space and Technology in mid-November.

One of the most hazardous industries in the United States is agriculture. As a result, …