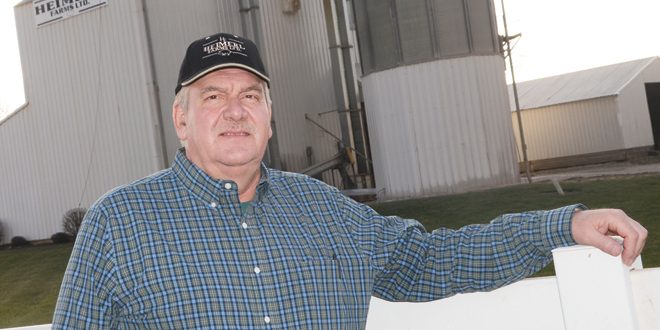 With fewer voices than ever before, trade wars, plant based meats, terrifying disease outbreaks, escalating animal rights concerns, and fickle consumer demands are just a few items on an increasingly lengthy list of challenges facing animal agriculture. The obstacles can seem overwhelming, but the 2020 Ohio Pork Industry Excellence award winner has some advice about how those in agriculture can address the challenges facing farms.

“You have to be involved,” said Jim Heimerl of Licking County who was recognized at the Ohio Pork Congress this week. “There are fewer people in our industry and we have to speak up. There are so many people out there trying to run our industry into the ground and we have to focus on our grassroots efforts and speak louder. The consumers trust us and they want to hear from us, but for our voices to be heard you have to be involved.”

Heimerl’s resume clearly shows he has taken his own advice, getting involved extensively at the local, state and national levels in service to the hog industry. Heimerl Farms began in 1975 as part of an FFA project and today sells 800,000 pigs per year. The operation also includes crops, cattle, a feed processing facility and a trucking division. Heimerl runs the operation with his wife, sons and daughter-in-law based on family values, superior animal care, environmental stewardship, and good community relations. Through the years, the Heimerl family has hosted many events and lawmakers on the farm to help share their story of agriculture.

For 30 years, Heimerl has volunteered his time to serve as a member of the Hartford Independent Fair Board locally and has served various roles in the Ohio Pork Council, including service on board of directors and president in 2013. He was part of the OPC executive committee when the agreement was brokered between Ohio’s agricultural leaders and the Humane Society of the United States.

More recently, Heimerl served as president of the National Pork Producers Council in 2018-2019 and he currently serves on the NPPC Board of Directors. In his years as president and on the national board, the nation’s hog industry has seen significant challenges and substantial success.

Heimerl was an instrumental leader of the Farm Bill Taskforce – which oversaw the USDA’s purchase of $558 million of pork for food banks. During Heimerl’s term as president, the pork industry faced tremendous trade uncertainty and progress.

“As NPPC president, I got to be at the farm bill signing on stage with the President. I have hit all the major offices in D.C. many times and did a lot of international travelling. It has been interesting to see what happens throughout the pork industry around the world,” Heimerl said. “There were a few nights stuck in an airport that I question, but it was the experience of a lifetime to be a spokesperson for pork and work for the industry. I was at the White House for the Christmas party. I enjoyed talking with Secretary Perdue several times. He is a genuine person. I rang the bell at the New York Stock Exchange with him. I really enjoyed networking with fellow farmers too. I love to hear their thoughts and ideas and that is as exciting as anything.”

The signing of the 2018 Farm Bill was a significant legislative achievement for the pork industry during Heimerl’s year as president. The bill contains funding and the framework for a Foot and Mouth Disease Vaccine Bank.

“The Foot and Mouth Disease Vaccine Bank funding in the 2018 Farm Bill was important so we have an animal lab set up in case we ever have a foot and mouth disease outbreak,” Heimerl said.

USDA’s Animal and Plant Health Inspection Service (APHIS) announced recent progress on the Vaccine Bank. Specifically, APHIS is awarding $10.2 million to support disease prevention and emergency response training. As part of this funding, APHIS is moving forward with developing the National Animal Vaccine and Veterinary Countermeasures Bank. The first priority of the bank is to increase the U.S. stockpile of FMD vaccines. Last year, APHIS’ 30-day sources sought notice for FMD vaccines closed, with seven responses reviewed by the agency.

APHIS is now issuing a request for proposals, and plans to have the initial FMD vaccine contracts in place by the end of the second quarter of FY2020. The agency’s goal is to invest between $15 million and $30 million on the vaccine by the end of this year. Currently, the USDA, which has prescribed vaccination for dealing with an FMD outbreak, does not have access to enough vaccine to avoid devastating economic consequences to the U.S. economy, should an outbreak occur. In very uncertain times with regard to disease and international biosecurity, this type of initiative is critically important to pork producers in their efforts to prevent the introduction of foreign animal diseases and maintain the high level of health in the U.S. swine herd.

Trade, of course, continues to be a priority issue for the pork industry at the national level.

“Every day there for awhile it seemed like there was a new trade crisis going on. The Japan TPP was one of the hardest things we got hit on when Trump came in. Then we got hit with tariffs on China. Then we also got hit with the tariffs on Mexico,” he said. “It was a real challenge, but I also got to see how we work with those countries and it was encouraging to see that. It has been interesting to see the back channels with trade in Washington too.”

Mid-January events provided some major progress with trade but many questions remain.

“Phase One with China is very exciting, but we are at 62% tariffs today and we don’t know which tariffs have been taken off. We have been promised a $40 billion purchase over two years but we don’t know for sure what we are facing with tariffs,” Heimerl said. “China has 50% of the world’s hog population and is the world’s largest consumer of pork. They have lost 50% of their herd from African swine fever — that is a quarter of the world’s population of pigs that have been lost. China needs our pork. Now the United Kingdom supplies a lot of their pork but they are also threatened by African swine fever. Lifting the tariffs is a big deal. The U.S. right now has a record number for swine production. We have a lot of pork to export and we are ready to supply their needs. They are our No. 3 trade partner and they had record numbers of imported pork from the U.S. in November. Ohio is the No. 8 state for pork exports so Ohio and the U.S. have a great opportunity here with Phase One, but it is a shame that we don’t know any of the details about the tariffs.”

The Senate overwhelmingly passed U.S.-Mexico-Canada Agreement (USMCA) and sent it to President Trump to sign in late January. In 2018, Canada and Mexico took more than 40% of the pork that was exported from the United States.

“You talk about a long agreement, this has been going on for several years. I am happy USMCA is done and I’ll sleep better at nights. It was a real accomplishment to get it done,” Heimerl said. “Mexico is our No. 1 trade partner. They take the most volume in exports of any country. They are big ham market. With hog production, that has been very important to us.”

Key agreements are finally falling into place to send U.S. pork out to the rest of the world, but at the same time, efforts have been ramping up to keep international disease issues out of the domestic hog herd.

Throughout his service at all levels of the pork industry, Heimerl has been known for his interest meeting with fellow hog producers and serving as a voice for their concerns. Whether he was meeting with hog farmers in a foreign country or shaking the hand of the President of the United States representing the nation’s agriculture, he has been able to do so with the incredible support of his family.

“I had a good family to support me at home when I was gone and it was a good opportunity for them to grow along with me and I couldn’t have done it without them,” Heimerl said. “It was the experience of the lifetime and a truly humbling opportunity. I learned I don’t want to be a politician. I also learned that we have to get involved and speak up for ourselves or the rest of the world will never know our story.” 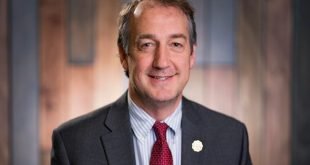 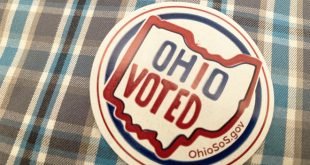 After several days of ballot counting and much anticipation, the Associated Press announced that former …