A push for local products has connected local farmers and businesses with the Athens and Ohio University communities in southeastern Ohio.

In the hills of Athens county, local farms range from beef cattle to honey bees and herb farms. These farms are connected with the rest of the community through groups such as Farm to Ohio Working Group and Athens Own.

“We have a work group here on campus, Farm to Ohio that is also working and help us bring more local products to different locations on campus,” said Drew Banks, general manager of the Ohio University Campus Cafes.

The Farm to Ohio Working Group (also known as FOWG) consists of Ohio University’s culinary services, office of sustainability, and center for community engagement. It began with a grant initiative with two Southeast Ohio organizations Rural Action and Community Food Initiatives. FOWG meets monthly and aims to find impactful ways for local food to be obtained by more consumers in the Athens area. For example, in the summer of 2019, FOWG purchased more than $10,000 worth of products from the Chesterhill Produce Auction. One of those products was a blueberry grown locally in Southeast Ohio. The culinary services at Ohio University uses the blueberry in a cookie, exclusively sold at the Campus Cafes.

“The campus cafes and the university as a whole have always been looking for ways to partner with local businesses to give boost to the local economy,” Banks said.

Other local products the cafes sell include Gallipolis Ohio roasted Silverbridge Coffee, Herbal Sage Tea out of Pomeroy, and New Earth Tea out of Athens, and whole and 2% milk from Snowville Creamery out of Pomeroy. When defining what a local product is, the university considers how many miles the product is grown, sourced, or processed from the campus.

A second group working to connect the local farmer to the local consumer, as well as local farmers, is Athens Own. Created by Constantine Faller, a local chef, engineer, herb and permaculture farmer, Athens Own creates a system of connections between the local farms and end users. This system works with small, local businesses and craftsmen who may not have access to channels of distribution. Athens’ Own provides transportation, inventory, and delivery of many local producers’ products to local groceries and businesses while serving as a common contact, so retailers and end-users do not have to deal with a large number of suppliers. Athens Own also helps individuals find resources to create and refine their own products.

For example, The Redbird Ranch located in Athens county, down the road from the Athens Own headquarters, raises black Angus beef. Athens Own gets the beef from the ranch to a local processing plant where the beef is dry-aged.

“The burger is a really wonderful square patty that kind of emulates a hand pressed patty as far as not being really tough,” Faller said. “We get it to our customers, one of which is Jackie O’s. They have been serving our burgers since 2006 and we’re really pleased with it. It’s also won a number of best burger in Athens awards.”

Athens Own is a 20-year-old company and has worked with Jackie O’s since the restaurant opened in 2006.

“Their commitment to being part of the local economy played really well with us with the beef, and we have been a collaborative partner with them in that including getting the grain from brewery back to the cattle farm,” Faller said.

The Redbird Ranch produces their own grain and hay for the ranch, with spent grain at a 20% to 30% of the diet, adding to the flavor of the dry-aged beef.

Lui-Lui is another Athens restaurant that serves a variety of foods, including brick oven pizza, sushi, soups and pasta, and another local business that has worked with the Athens Own system.

“They really value the 5-month aged steaks that we do, and they have been serving them for quite a while now,” Faller said.

Faller said the company has the opportunity to “step beyond” their mission when it comes to catering to the businesses that work with Athens Own. Another restaurant Athens Own works with is Fusion Noodle Company. With the system Athens Own has, Faller has the ability to connect Fusion Noodle with another beef farm in the area when the Redbird Ranch does not have the beef to the specifications needed by the restaurant.

“Our goal is to build the community. There are a lot of ways that can happen. It’s not just the product that goes through our hands,” Faller said.

The inspiration for Athens’ Own came from a need for social change and is based upon four key ideas that include: the creation of local jobs that offer a living wage and keep workers personally invested in their employment; quality, responsibly produced products at a fair price; leveraging existing resources in a better way; and unification of the local economy.

The bigger picture behind Athens Own also includes Faller’s life-long love for food.

“Aged beef is something I knew about in my childhood,” he said. “As a chef, culinary institute trained, it’s really gratifying to try to bring really quality products back together with the consumers that are also looking for better ways to be part of their own local community.” 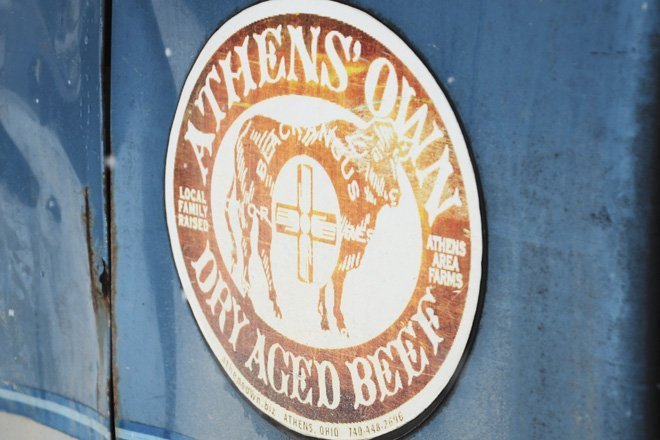