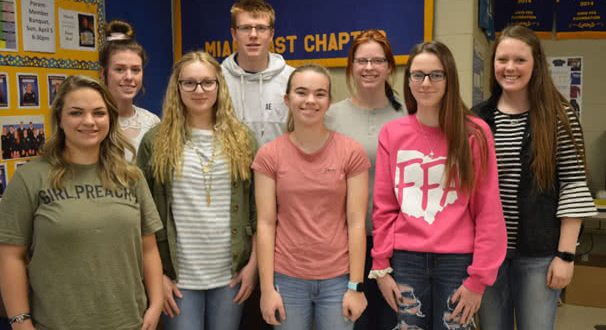 The State FFA Evaluations were recently held at the Ohio FFA Center in Columbus, Ohio.  Several members of the Miami East-MVCTC FFA Chapter competed in various competitions.  Members became eligible for State Evaluations by placing at District Evaluations in February.

Proficiency Awards – Members applied for a district and state proficiency award. They were recognized for having an outstanding Supervised Agricultural Experience program in one of 47 areas. Four members applied placed in the state and will receive an interview. They just received notice of interviews for being Top 4 in the State candidates. They will now prepare a display of their project, be interviewed by an industry panel of judges, and be recognized on stage at the State FFA Convention.

Beef Production Placement – Lucas Gilliland has job placement at Stone Springs Shorthorns in Casstown. He works with the production of beef animals, feeds livestock, and assists with other farm production practices.

Diversified Livestock Production – Michael Bair has job placement on his family’s dairy and poultry farm. He is responsible for milking cows, feed and caring for livestock, and gathering eggs to be sold. He also raises and markets his own market chickens.

Poultry Production – Michael Bair raises and markets “Michael’s Pasture Raised Poultry” through his on-farm sales and a local virtual market. He earned a National FFA Grant to purchase a freezer to store his product in. He also works for his family’s organic egg sales.

Vegetable Production – Lauren Wright owns and operates Wright’s Sweet Corn, a 1 acre sweet corn patch. She markets her sweet corn through a roadside stand and at the Troy Farmers Market.