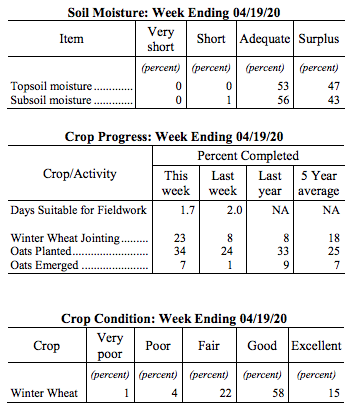 Cold temperatures and precipitation didn’t stop farmers from working the fields entirely, according to Cheryl Turner, State Statistician, USDA NASS, Ohio Field Office. Temperatures averaged 10 degrees cooler than historical normals and the entire State averaged slightly more precipitation last week. There were 1.7 days suitable for fieldwork during the week ending April 19. Temperatures fell below freezing across most of the State and the lowest temperatures were observed in the west and north. Some northern portions of the State received 3-4 inches of snow. Freezing temperatures burned some winter wheat leaf tips as winter wheat jointing progress was 5 percentage points ahead of the five-year average. Freezing temperatures caused fruit growers take preventative freeze measures and to scout for frost injury to budding trees and vines. Anhydrous Ammonia was applied to fields, top dressing of wheat continued, and manure was hauled. Chemical spraying was hampered due to high winds. Alfalfa leaf damage was reported in some hay fields, but damage was not widespread. Oats planted was 9 percentage points ahead of the