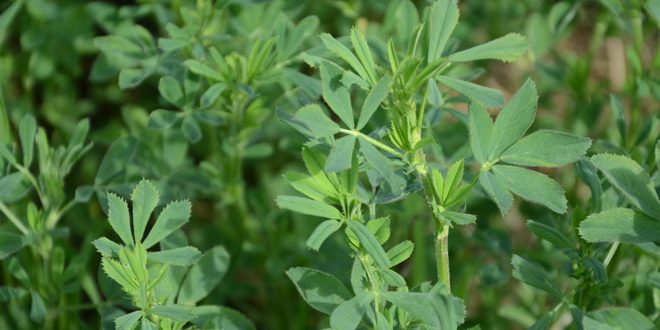 The alfalfa crop over the past week has continued to advance in maturity. Pure alfalfa stands across Ohio are ready to be harvested for high quality forage. Producers in dryer regions were able to start harvesting alfalfa fields over the weekend. Western Ohio has had larger rainfall totals than Eastern Ohio over the last two weeks. Keep in mind that harvesting when the soil is too wet and soft will do non-reversible compaction damage to the stand and will lower the productivity the rest of this year and into future years.

Using the predictive equations for alfalfa quality (PEAQ) for estimating neutral detergent fiber (NDF) can be used for multiple cuttings throughout the growing season. Once the alfalfa crop reaches 16 inches tall, measurements can be taken to estimate the percent NDF using PEAQ.

Just as a reminder, here are the instructions on how to rapidly predict NDF using PEAQ. Be sure to use this method when estimating NDF on pure alfalfa stands.

Looking ahead, as we see weather systems from the south move north potato leafhoppers (PLH) may begin to colonize in Ohio’s alfalfa fields. Once PLH eggs are laid it only takes about three weeks for the eggs to develop into adults. Populations are usually sporadic but if present they can cause severe damage on the alfalfa crop. For more information on potato leafhoppers visit here.