Last week’s USDA report showed 10% less carryout than the trade expected for the 2020 crop. However, it was still 3.3 billion bushels, which is concerning. In the last 33 years, the highest final carryout level ever reached was 2.3 billion bushels. While some farmers may have switched corn acres to beans, or other spring crops, it’s unlikely to be enough to offset 1 billion corn bushels.

This week a couple farmers across the country discussed setting basis levels in their area and moving grain sooner than later. Here are some issues to consider before setting basis for May, June or July delivery without first having futures prices locked in.

First, a farmer needs to decide if they are willing to set their futures price on this trade by June 29. The reason for this is because that is the last day most end users will likely let farmers set the futures price against the July futures on a basis contract. If the price isn’t set by that date, the farmer will likely have to “roll” their basis contract to September futures, which introduces spread risk to the trade.

What is the spread?

The spread is the price difference between two different futures contract months and is essentially how the market determines when it wants grain and how much it is willing to pay someone to store it. While spread trading is rarely done by farmers, most big commercial storage facilities make a sizeable portion of their profits from using it. Its how storage can pay for itself.

For instance, the day before states started issuing “stay at home” orders, the July to September spread was zero, meaning both July and September futures were at the same price level. Since then, the spread has traded to -7 cents. This value represents the relationship of July futures to the September futures. A negative number means that July is that many cents lower than September while a positive number would mean that July is trading higher than September. That spread value also represents how much it will cost to “roll” an unpriced basis contract forward to the next contract. A negative number means it will cost money to roll forward. Last Friday the July/September corn spread was -3.75 cents (July was around $3.19 ¼ and Sep was $3.23). 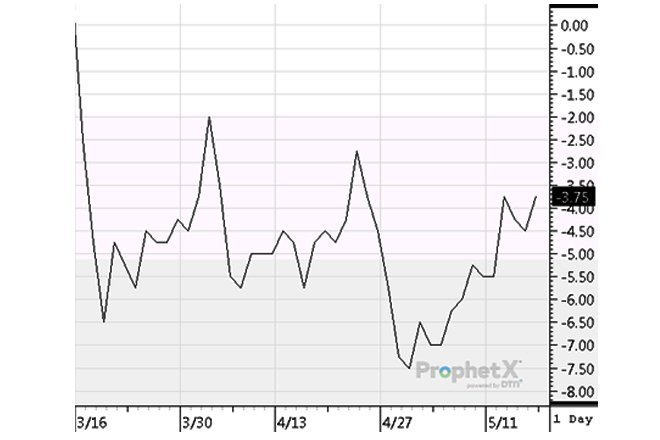 That would mean that if an unpriced basis contract had to be rolled to the September that day because it wasn’t priced it would cost 3.75 cents to do so for the farmer.

Why is the spread moving?

The spreads job is to help determine if grain should be stored longer or moved sooner. In this case, largely because farmers are not selling grain at very low futures levels the spread has moved higher on the chart and is telling the market it wants the grain now not later. A move from -7 to -4 might not seem like a lot to a farmer but the market is trying to encourage grain movement from commercial storage facilities.

How do commercial facilities profit from spreads?

Commercial storage operators analyze spreads and calculate the costs of interest on the value of the grain and time to store the grain they own on hedges. This allows them to see if the market is paying them enough to keep storing grain, or if they should move it now because basis values have improved.

Using the May/July corn spreads as a comparison

The chart below shows how the May/July corn spread changed from January until the last trading day end users would let farmers leave a basis contract open without pricing and rolling it by the end of April. 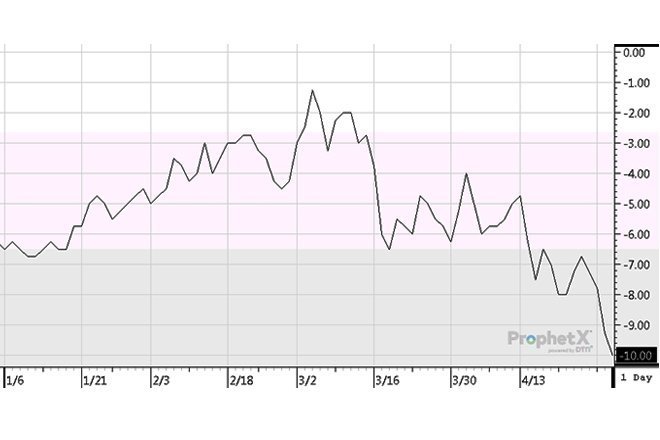 As the chart above shows, before the coronavirus became a problem the spread had moved from -6 all the way up to just -1. This was a result of slow farmer selling because there was a belief that the country had less corn on hand than the USDA was indicating. Many farmers were holding out for values above $4 or maybe even $4.20 futures.

Then on March 16 the “stay at home” orders started to go into effect around the country and demand for corn from ethanol plants dropped 40%. Because there was a huge drop in immediate demand the spreads needed to try and incentivize corn to be stored and it’s why the spread eventually dropped back to -10 cents on the last trading day.

What does this mean?

How far could the July / September spread move?

It’s uncertain. Today the spread is about 4 cents. However, if many farmers begin to sell cash corn in June, and demand doesn’t improve, the spread could widen back out to -10 cents like the May to July spread did.

Could the spread turn positive?

Yes, that could happen. Last summer when the U.S. was expected to only plant 80 million corn acres and potentially be out of corn, the July ’20 futures were trading 40 cents higher than the September ’20 futures.

What could cause the spread to go positive now?

The most likely scenarios at this point would be lack of farmers selling, a huge sale to China for immediate shipment or a big political deal out of Washington that completely takes the market by surprise and affects supply or demand.

So, is that basis level a good sale today?

That’s like asking if futures should be sold today. Basis is only one part of a larger equation in the market. Spreads and futures should also be considered in that sales decision. If basis continues to improve there is a chance that the spread will turn positive. It could mean it pays to wait a little longer before setting the basis levels. Traditionally basis goes up first and that leads to the spreads firming. When the spreads firm it usually leads to a futures rally.

But if the futures do eventually rise then it’s likely that farmers will begin to sell cash grain and then the basis will drop which then likely means the spread will drop as well. This is why it’s important that a farmer who sets the basis first has a plan to get their futures priced on the trade as well.

Another example of spread risk

I have heard of a few farmers who set basis back in the fall before having their futures price established. They set their basis for December delivery against the December futures expecting a big futures rally once harvest was complete. Unfortunately, they haven’t seen a price point they have liked yet. They have now rolled their basis sales forward three times. If these farmers waited until the last trading day of each contract month, their “rolling” costs would have been:

That is 24 cents less on the basis trade they made last fall. The basis price they thought they were getting doesn’t look very good now and they still haven’t set a futures price. This is illustration as to why it’s risky to set basis before futures are priced.

Ask yourself when you expect a rally?

If a farmer is looking for a weather scare to improve the futures level the likelihood of that happening before June 29 is certainly possible but it’s far from certain. The highs in the drought years occurred after July 4. This would mean that the basis contract will need to be rolled to the September contract at some point.

If a farmer knows they are going to wait until July to set the futures price they could set the basis today for about 4 cents less than the bid by the end user and have the basis set against the September futures right now. But does the basis trade still look as good if its 4 cents less? I tend to find that usually most farmers don’t seem to think the basis trade looks as good when they consider the spread in the trade.

Understand the added risk in basis only trades

While farmers may still consider setting basis without futures priced, they should do so knowing the potential risk they are facing if the spread widens further because futures don’t rally for them to price the grain. That risk and the spread roll can certainly affect a bottom line.