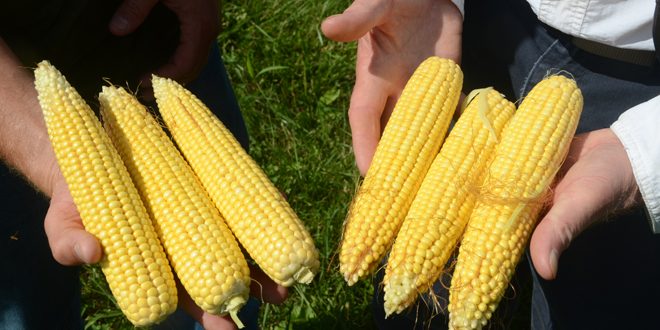 Over the next week or so we will reach the time of year when field activity begins to slow down after the rush of planting, herbicide applications, and sidedress nitrogen applications have been completed. While we may be slowing down, our crops are beginning to ramp up growth and development from the vegetative stages to the very critical reproductive stages. Planting conditions, fertility and weed control have set the foundation for the crop from this point forward and cracks or missing pieces of that foundation may have placed some yield in jeopardy even this early in the year.

Corn is entering the grand growth stage where rapid growth of above ground biomass occurs and rapid uptake of key nutrients out of the soil is taking place. During this time nutrient uptake increases at a rapid pace and continues until late into grain fill. Restriction in root development due to sidewall compaction, tillage compaction or root pruning due to corn rootworm damage can limit nutrient uptake during this critical time. While technically corn is still in the vegetative stages from a growth staging perspective until silk emergence critical yield determining components are under development in the number of kernel rows around the ear and total possible kernels in length. While genetics can play a role in the number or kernel rows around and possible kernels in length, stress or a lack thereof can also have a major impact on both of those factors.

Ear girth (or kernel rows around) is the first factor to be determined in the V5 to V6 growth stages. Maximum ear length is determined during the late vegetative stages initiated around V12 timeframe. Since the number of kernels around an ear are an even number, stress during these growth stages can have a sizable negative impact on yield potential. In the past several years the movement in corn production seems to be towards larger planters without traditional 2×2 starter systems and movement towards in-furrow starters systems that limit the amount and types of nutrients that can be safely applied at planting. Additionally, the push to apply nitrogen later in the growing season with high clearance sprayers or dribbling type of applications can lead to corn plants that are deficient on nitrogen during these early key stages in ear size determination. While applying nitrogen closer to grain fill does have its advantages from an agronomic and environmental standpoint, nitrogen deficiency during these vegetative stages on can have a negative impact on overall yield potential

The total maximum number of kernels per acre has been determined by the time we reach true reproductive stages when the first silks start to poke out of the husks. Stresses on the corn plant from this point forward can only detract from yield. There are four main stresses at this point in the growing season and two of these can be influenced by management, while the other two are mainly left up to mother nature. The two stresses that can be influenced are foliar diseases and insect pressure. While the vast majority of insects are controlled through a biotech trait, there still are acres of non-traited corn where damage from European corn borer and silk clipping insects like corn rootworm beetles can be an issue. The more prolific issue tends to be with foliar diseases like gray leaf spot and northern corn leaf blight as they directly limit the amount of green photosynthetic area on a leaf reducing the energy produced by the plant. The weather has the largest impact on kernel retention and kernel fill as a lack of rainfall and high temperatures during the grain fill period leads to lower overall yields. While individually, heat and drought stress can cause yield loss but the combination of the two can have the most detrimental effects on final yield.