Trades don’t always work like you think they will

The export market heated up this week as China bought U.S. beans for August/September shipment, but then the President suggested the trade deal could be secondary to China, who might be responsible for the coronavirus. Could this mean that the trade war is not yet behind us?

As stay at home orders have started to ease, gasoline usage has increased. With that increase, ethanol stocks have dropped from their record highs too. While still far from normal, both are moving in the right direction.

U.S. beans continue to be crushed at high volume, which is a positive. However, the Brazilian Real’s currency value continues to decrease relative to the U.S. dollar, hampering upside in the bean market here in the U.S.

Why did you do this?

Initially I wanted to spread my risk between the two contract months (March and July), because I was uncertain where the market would go. I sold the July for a 25-cent premium to the March because I thought I would need to wait until summer for basis values to hit my sales targets. I sold the March assuming I would eventually roll it to July and capture some carry at which time I thought I probably would be setting my basis values.

At that time, the 25-cent spread between March and July soybean futures was near the bottom of the trading range. The red X below represents when the spread trade through the futures sale was put in place. 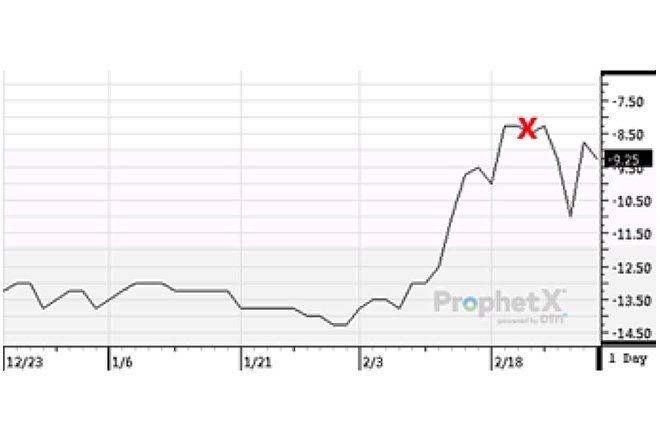 The chart shows the spread between the March and July contracts over the past 5 months was between 15 and 28 cents. So, having this spread on very close the bottom end of the range seemed liked a very good situation to be in.

To my surprise, within a few weeks of setting my futures prices, my basis goal hit against the March contract. I set basis on 100% of my 2019 beans at that time.

How did that affect your position?

My thoughts at the time

Back then my notes show I thought the Phase One trade deal would cause a sudden rush in soybean demand and a price rally. If this happened, I believed that the spread between the March and the July would narrow back together and I could move my July sale back to the March and make a premium. But as we know that didn’t happen.

Instead, the Brazilian Real dropped in value to the U.S. Dollar and made soybean values in the southern hemisphere more attractive for China and the world to buy. U.S. bean prices imploded after Jan. 2 to try and stay competitive with Brazilian beans. But because of the drop in prices here in the U.S., farmers were not interested in selling. This lack of selling caused the March/July spread to narrow. Usually a drop in futures prices suggests that there is too much product. But basis increased and the spreads narrowed which suggested lack of sellers in the market domestically.

What did you do next?

On 2/20/20, as the end of the March contract loomed, I rolled my long March position to May futures for 8 cents. This chart shows the March to May spread and the X is where I made the trade.

The spread was around 13 cents at the beginning of January when I initially placed the trade, but as farmers sat on the beans and didn’t sell the spread narrowed in and allowed me to pick up 5 cents of profit from where this trade was first put on.

What did you do next with the May position?

On 3/24/20 the May/July spread narrowed in to just under 1 cent. So, I rolled my long May future to July, which offset the short futures position I already had from back at the end of December. This chart shows the May/July spread for the past few months, and the red X represents my final trade of the spread position. 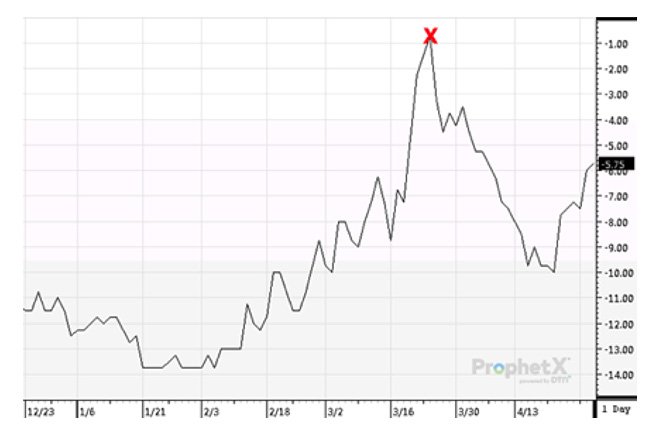 Again, the lack of selling by the U.S. farmer caused end users in this country to bid up for May beans relative to the July beans. I was able to capture over 11 cents on this portion of the spread trade from where I initially had placed the trade.

What does this all mean?

I didn’t expect this trade to work this way. I thought the spreads would narrow because of high demand from exports and futures going higher. Instead the increase in feed demand and the lack of farmer selling because of much lower values was what was helpful to me with this trade. Given the disappointing prices since January 2, capturing 14 cents of additional profit on 25% of my beans is a nice win.

Which USDA reports are the most important?

By Jon Scheve, Superior Feed Ingredients, LLC China’s purchasing of corn and beans is the …