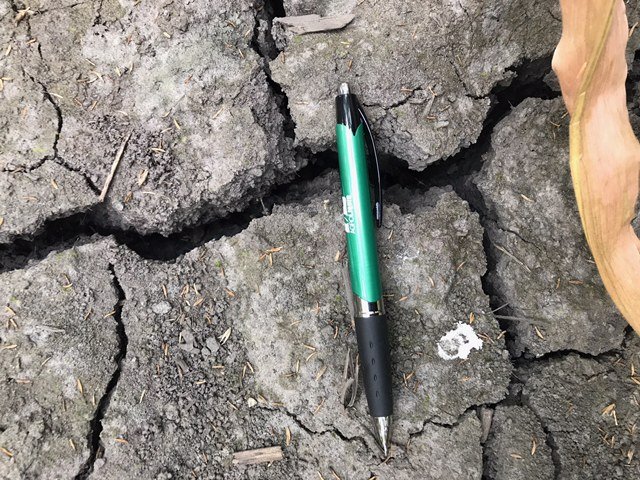 Taylor reports that every 1 inch of fully and effectively used water is worth about 8 bushels corn, 3.5 bushels soybeans, and 6 bushels wheat. Effective rainfall is an extremely important concept. Imagine a slow steady 2-inch rain over several hours versus the same amount in 5 minutes. Soil has the ability to store a lot of water, but the water needs to soak in and be effectively stored for plants to use that water. Soil organic matter on the surface not only reduces soil temperatures, it also slows down water runoff and increases water infiltration and retention.

How much water a soil can hold is highly dependent upon soil organic matter (SOM) and soil texture. Soil texture is the amount of sand, silt and clay a soil contains. For soils with 1% SOM, a silt loam soils holds 1.9 inches of water, a silt clay loam 1.4 and a sandy soil 1 inch per foot of soil. Every acre-inch of water is 27,156 gallons, so soils are really good water reservoirs. As the SOM levels increase, the effectiveness of water storage decreases slightly (shown in brackets). A 5% SOM silt loam soil may hold 4 inches (.8 inches/% SOM), a silt clay soil 3 (.6) inches, and a sandy soil 2.5 (.5) inches per foot of soil. Most soils have a rooting depth of 3 feet but generally SOM levels decrease with soil depth (Hudson, 1994).

Effective water storage and plant available water now comes into play. A few years ago, I traveled to Minnesota for a field day. The soil was dark black from high levels of SOM that had accumulated over a millennium. Corn yields ranged from 125 to over 250 bushels, and the fields were side by side with the exact same soil type. The corn height was extremely variable due to droughty conditions. After digging a hole, it was discovered that the plowed corn roots were only 8 inches deep due to a hard pan. In the no-till field, roots were 4 to 5 feet deep. Surprisingly, there was soil moisture available only 3-4 inches from corn roots, below the plowed hard pan. Minnesota farmers typically plow corn and soybeans every year, so a deep hard pan greatly limited root penetration, water accessibility, and crop yields.

Soil bulk density also impacts potential water storage. Soil bulk density is the weight of the soil (grams) divided by the volume (cm3). For reference, there are 454 grams in a pound and a centimeter is about .4 inches. Imagine a sponge and a brick which have the same size (volume). The sponge is softer and lighter and has more pore space to hold water than the brick which is heavier and denser. Soils that have more SOM have a lower bulk density (.6 g/cm3) than a highly compacted dense soil (1.7-1.9 g/cm3). In an ideal soil, about 50% of the soil volume is pore space. In a compacted soil, that pore space may decrease to 20-30%, so that soil holds much less water and with hard pans, the roots may not access the water.

The solutions to drought and hot soil temperatures are not easily fixed this year because it is too late. However, take a shovel and in the early morning or late evening, do a little digging to look for hard pans. SOM improves soil structure to allow more water to be stored and accessed by plant roots. Increasing SOM comes from growing live roots year-round. Planting a cover crop may take out about 1 foot of soil compaction per year and add .1 to .15% SOM per year. Improving soil resiliency starts with planning for the future now. 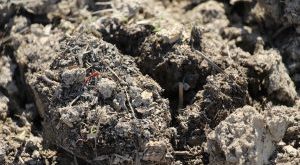