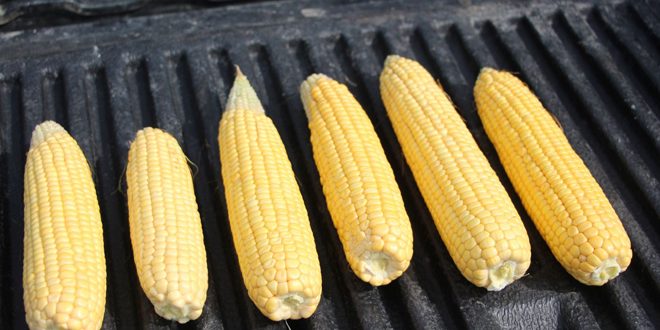 This corn was sampled in Haas' Wood County field that has not had much rain to work with in recent weeks.

Crop tour highlights efforts to care for land and crops

For the 2020 Ohio’s Country Journal and Ohio Ag Net Virtual Crop Tour two fields in western Wood County farmed by Brad Hass were evaluated. Both were Hoytville clay soil and were well drained. The corn was a prevented planting field in 2019 due to the excessive rainfall. It had some volunteer wheat from 2018 that was allowed to grow in 2019 as a cover crop, then was terminated and tilled prior to planting the corn in 2020. The hybrid evaluated was a 108-day corn. The initial target population was planned for 32,000 but actual planting population was closer to 30,500. Emergence was uniform, and stalk strength looked good. The ear count came out to 30,000 per acre. A majority of the ears were 18 kernels around, with 30 kernels per row. The kernel depth was somewhere between average and excellent. There were a fair number of aborted kernels in the tips of the ears. The field had not been sprayed with a fungicide or insecticide, but was very clean, with little noticeable insect damage.

The soybean field was beans back to beans. It was a 2.4 maturity bean. The crop was very uniform with a canopy height of 31 inches. The beans had nodes every 2 inches, with most nodes having 3 pods, and some having 4. Most plants had at least one or two 4-bean pods. The field was sprayed with both a fungicide and insecticide about a week prior to our evaluation. It was clean with no disease present, and very little insect feeding observed. It was also an Xtend bean that had been sprayed with Xtendimax at the end of June, and there was now weed pressure currently. Overall, it appears to be an excellent bean field.

Weather is going to be a key factor for both these fields moving forward. While the top end yield has most likely been shaved off, a few timely rains will fill out the bean pods, as well as the size the kernels given their depth.

Stewardship of the land is an important job that many farmers take great pride in. The desire to leave a farm a little better for the next generation is a noble pursuit. Haas has been working to improve the ground he farms every year.

“There is always something you can improve,” said Haas, who farms with his son Kennen and nephew Kyle. “You can always work to improve the drainage. A field can always use tile, or surface drainage to move water. You can always work on improving the soil fertility or work to reduce compaction.”

These are the concepts Haas has been passing on to the next generation on his Wood County Farm, and improvements to the soil are the proof. Haas raises field corn, popcorn, soybeans, wheat, and green beans in Wood and Henry counties.

“When I started farming, Dad let me take over a couple of tough farms, and with time I was able to turn them around,” Haas said. “One key is being patient and not getting out on them too early when it is just a little too wet. Another key is having good drainage.”

Haas has systematically been ditching his farms to improve the drainage, and recently also purchased a slinger rotary ditcher to cut surface ditches.

“Kennen has it hooked up so he can use the GPS for depth control, along with guidance and mapping,” Haas said.

In 2019 Wood County Ohio had the largest number of prevented planting acres in the state. “Over half of the county did not get planted last year,” Haas said. “We had several farms we had to let go and take the prevent plant because it was too wet, and got too late in the season.”

Haas has been working to get back to the cropping rotation he had prior to 2019.

“Every farm has a little different rotation based on if it is a lighter sandy soil, or a heavier clay soil. On the lighter sands to the north, we will grow multiple years of corn back to corn, followed by soybeans. On the heavier clay soils to the south, we will incorporate wheat in the rotation,” Haas said. “This particular field of beans was also soybeans in 2019, and wheat before that. It has been in a 2-year beans, 1-year wheat rotation. It just depends on the farm.”

Haas also knows you need to be a good steward of his resources.

“Take care of the soil and the crops, and they will take care of you,” he said.

Haas will regularly spray both fungicide and insecticide as needed in season. This year he sprayed about a third of his corn acres with both fungicide and insecticide using a helicopter. “We intensively manage our crops and more often than not, the final yields represent that,” said Haas. We have had years when we don’t always see the results, and years when it has more than paid. I tell my son, at the end of the day, it needs to make money.”

“We started planting corn on April 27, and soybeans on May 1. This year, we got off to a really good start. The ground had good soil moisture, and the crops were planted timely and had uniform emergence,” Haas said. “We had a heavy rain about a week after we finished planting on May 13. On May19, we got 2.5 inches in one shot. After that we only received a total of 1.1 inches until the first of August. We caught about .8-inch on Saturday, Aug. 1, and then another two-tenths of an inch this past Monday. For two months, this crop has been surviving on less than an inch or rain.”