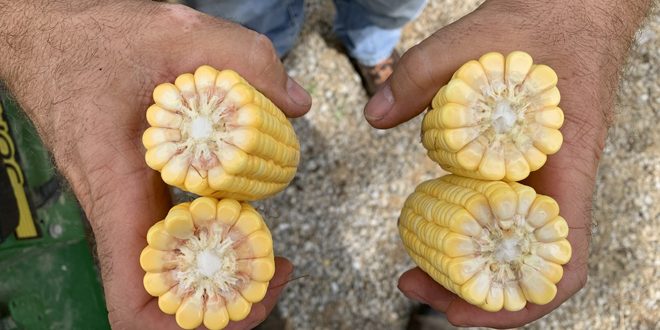 The May 11-planted corn field was 180 degrees different from a year ago. The yield was estimated to be 100% greater than 2019 (because in 2019 there were not ears to evaluate). The corn field was a 111-day hybrid. It had a final stand between 32,000 and 33,000 plants per acre, with generally small ears at this point. The field had recently finished pollinating, and some of the ears were relatively immature. Uneven emergence was evident in the size of some of the corn plants. This was largely due to weather stress and ground conditions. The corn was relatively short, but the ears evaluated show potential for a fair to good yield if some timely rains come. Unfortunately, the field missed out on the Monday night rain, and no additional precipitation is in the forecast until the coming weekend.

Disease and pest pressure were low. The field had been sprayed with fungicide and insecticide early. There was some kernel abortion at upper 10% of the ear tip. The yield estimate was 178.3 bushels.

This field is looking very good. It was planted June 3 and still pollinating. It had little disease and insect pressure and was extremely green, no stress. There is a little tip back and a nice 210-bushel yield estimate.

This corn was planted on June 2 — two different hybrids. One hybrid was still pollinating but looking good with a 210-bushel estimate. The second hybrid was also still pollinating with a yield of 195 bushels. A fungicide had been applied to both field and disease pressure was low. Both could still use some good moisture to reach their potential.

It was dry. The field was planted on May 16 and had low insect and disease pressure. There was firing on bottoms of the plants and some irregular pollination and tip back. Yield estimate: 198.5 bushels.

This field is in very good shape. It was planted April 27 and has a population of 36,000. There is some tip-back and yield is looking strong at 234 bushels. This field was sprayed with fungicides and has had nice rains, though it is getting dry now.

The plants were short — only about 6 feet tall. The population was low in some areas but weed control was excellent. There were some slight pollination problems. A few areas of the field were replanted. The field was planted May 5. Overall the field is fair with slight tip back and a yield estimated of 145 bushels.

This field was planted in wet conditions of June 2 and has been extremely dry since then. The field has only gotten 1.5 inches since tassel. Dry weather has caused some stalks to not set a viable ear. Pollination suffered due to stress as well. Some GLS starting to show up and there have been pollination issues due to stress. The estimated yield is 125 to 130 bushels.

This corn was planted on May 9. It was a generally healthy, consistent stand, with ear height at 5-feet 6 inches. The field is currently experiencing dry conditions, but not severe drought. Disease pressure is light, but there is some above the ear. There is limited tip back and a yield estimate of 220 bushels.

This corn was planted April 29. The 108-day corn was planted into a field that was prevent plant in 2019, and wheat in 2018. The 2018 volunteer wheat was left go in 2019, and then terminated as a cover crop and tilled. The field had a uniform stand and uniform emergence. Final population was around 30,000. This field was not sprayed with fungicide and insecticide. The kernel depth was average to excellent. Overall it was a very nice field with good yield potential if we can get some rain to reduce the drought stress and finish out the crop and fill the kernels. There was a little northern corn leaf blight on end rows and some aborted kernels on the tips. The yield estimate was 207 bushels.