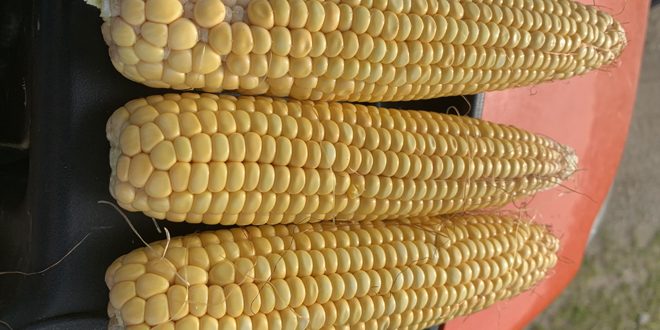 This May 4 planted field had a final stand count within 1,000 of planted. Ear size shrinks on clay hills, but every stalk has an ear. There was no insect or disease pressure. It was at milk stage with a yield of 140 to 150 bushels depending on where in field you pull sample. There is a great final stand count, but ear size on clay hills suffered due to lack of moisture.

There was a great final stand in this field planted May 5. It had even height across the field. There was light northern corn leaf blight. Yield estimate: 185 bushels.

Crops look great for limited rains in areas at times. This first field was planted May 13. The first very concerning problem was the tip-back and bird damage in the very first field of corn planted with a yield estimate of 225 bushels per acre.

Directly across the fencerow, the corn was planted May 29 with no bird damage and a very healthy, great stand. The ears were filled clear to tip. The yield estimate is 260 bushels per acre.

Bottom ground that hasn’t had corn in 20 plus years planted May 31 was very healthy with no damage and little disease pressure. The yield estimate here is 265 bushels per acre but could use more rain to increase kernel depth and size.

Corn planted May 17 before we had several inches and below normal temperatures comes in at 245 bushels per acre. Populations on the early corn were around 28,000 to 30,000 but larger ears made up for the lower population.

To the northern end of Clinton County, where it has been much drier than the south end, corn planted May 26 was estimated at 259 bushels per acre.

All corn was sprayed with fungicide at V5 or with airplane at tassel. In general, disease pressure was limited with some gray leaf spot. There was some tip back in early corn and full ears in late corn.

There was deer damage and a need for some rain in this field with a strong yield potential of 214 bushels. More rainfall is going to be needed to get to that yield level, though.

The entire field was replanted on May 29. The corn is about 9 feet tall. There is firing on the bottom 3 leaves and slight tip-back, but even ear fill otherwise very consistent at 16 around on ears. The projected yield was 184 bushels.

The corn went in on June 4. It was no-tilled into wet conditions and received just enough rain at just the right time. Pollination had recently finished, just missing the hot weather. I think the yield estimate is high and there is still a lot of runway for this field before it is in the bin. One check was 230 but there is no way it will finish there. There was very light GLS on lower leaves with excellent ear fill so far and a yield estimate of 215 bushels.

The field was planted the first time May 5 but had a replant on May 27 for part of the field. The early-planted corn averaged 118 and the later replanted corn was 192. There was very little disease pressure and some slight tip-back with an overall yield of 155 bushels.

The field was planted May 4 and has a great stand, great color, and decent height, but smaller ears. Second ears on some plants do not have much to give. There was little disease or bug pressure. This field just missed some much needed rain. Field was no-till as with NH3 applied. The kernels were shallow and the yield estimate is 175 bushels.

This May 9 planted field had some thin spots. I would guess the field will do somewhere in the 160 to170 bushel range, lower than what was calculated. Fungicide was not applied and pest pressure was low. The ear fill was good.

This field was planted May 6 and is looking good. The ear fill was good, population was solid and there were no pest or disease issues. The yield estimate is a strong 221 bushels.

This field was planted May 31. It was just pollinating, but mostly done. It was 75% to 80% brown silk and still shedding pollen. It had good health and was green all the way to the ground. The 3 ears sampled averaged 15.33 around and 32 long in a stand of 35,000 with harvestable ears. The disease pressure was very low. Fungicide was applied at VT. There was still gray leaf spot on the bottom few leaves. Pest pressure was negligible. Ear fill was fairly good, with 4 to 6 kernels tip back. The yield estimate: 202 bushels.

Samples were taken from 2 fields planted a day apart on the same farm. One hybrid is 97-day and the other is a 115-day silage hybrid. The average yield across the fields was 222 bushels.

This field was planted May 19 and was generally good but had incomplete ear fill. There was minimal pest pressure and no disease pressure. The yield guess in 208 bushels.

I found a very clean field with no weed, insect or disease pressure. It was planted May 6. The yield estimate is 198 bushels.

It was very dry for this corn planted on May 9. Disease and insect pressure were low. Ear fill was decent with some pollination issues. The yield estimate is 169 bushels.

This field was planted April 20. There is a little top-back, but no insect or disease pressure. The yield estimate is 227 bushels.

This corn was planted May 4. The field was experiencing heat/drought stress. This operation’s yields, like this field, vary from sub-100 bushels up to 215 bushels per acre. Ears were not pollinated to the tips. There were small and shallow kernels. There was no insect or disease pressure and a yield estimate of this field of 174 bushels. Stalks showed signs of heat and drought stress.

This farm is very dry, receiving under 2 inches of rain. The field was no-till planted and has population challenges with only 18,000 to 26,000. It was planted May 1. Some spots were less than 5 feet tall. Weeds were a problem in this field too, especially in low population areas. The ear fill was poor with many voids and tip back. The yield estimate is 94.5 bushels.

Plants are short, only about 6 feet tall and population is low in some areas but weed control was excellent. There are some slight pollination problems. The field was planted May 4 and a few areas of the field were replanted. There is no disease or pest pressure. There is some slight tip-back and a yield estimate of 145 bushels.

What a difference 15 miles south and 20 days earlier planting makes! This corn was planted May 15 and has a 211-bushel average and not showing any signs of stress. Fungicide and insecticide were applied two weeks ago in this very healthy corn. There was some slight tip-back.

This mid-May planted corn was weedy, with giant ragweed in large patches, plus giant foxtail and fall pannicum. Disease pressure is pretty low with some gray leaf spot about 2 leaves below the ear. There was a fair amount of insect feeding on leaves with grasshoppers. Ear fill is very good with a yield estimate of 161.3 bushels per acre. There are many double-eared plants due to a low population.

This field in the northern part of the county was planted on May 10. It was a clean field with good moisture and plenty of residue. It was well along in development but short on plants. There was some gray leaf spot, but low on plant. Northern corn leaf blight seemed to be held in check. There were Insect feeding scars on lower leaves — I assume flea beetle. Ears were willed clear to end, but may have limited yield with an estimate of 168.8 bushels. The plant population struggled likely due to challenging mid-May conditions.

This field was first planted on May 17 and replanted in spots June 9. It had just finished pollination. There was some GLS 2 leaves below the ear. Ear fill depends on plant date, but was generally good. There is good soil moisture so it can continue to fill out kernels. The yield estimate is 172.9 bushels.

We know for a fact that this farm missed out on quite a bit of rain. This farm was planted April 29 and received a split application of nitrogen and a fungicide application. There was a nitrogen deficiency evident. The lack of rain at this location most likely led to a nutrient deficiency in general. It was noted during the second nitrogen application that a nutrient deficiency was evident already. There were some population issues here and there on the end rows. The center of the farm had a much better stand and the plants were much taller. The deeper you walked in the field the more things improved. This was a 109-day corn located 2 miles south of Middle Point. What this farm lacked in population it made up for in ear fill. Ears were filled from top to bottom. There was no evidence anywhere of tip back. The yield estimate is 226 bushels.

Though more rain will be needed to maximize the potential of this already dry field, the 219-bushel yield potential is there.

The planting date was June 3. This was excellent looking corn still in the blister stage with lot of potential. The field is weed-free and the base of the tassel is 7 to 10 feet. Late rains could push this crop. It had a couple of ears 22 around most 16 or 18. There was slight tip back, but hard to tell since ears are still in blister. It was well pollinated on the rest of ear. The yield looks to be 194 bushels.

Delaware County The 10th stop of the North Leg of the Ohio Crop Tour, Sponsored …