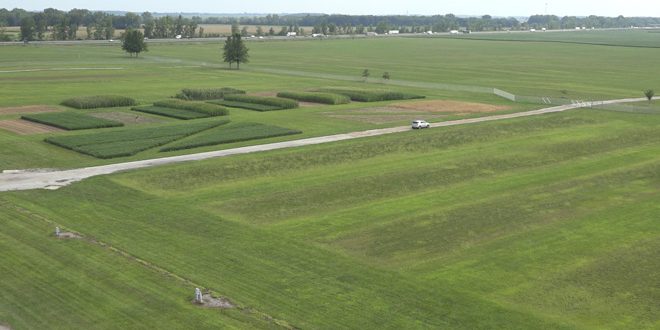 This is some of the new, expanded show area at the Review.

The OSU Extension, Agronomic Crops Team and the e-Fields Program had a number of research plots once again at the Molly Caren Agricultural Center in 2020. The online review gave guests a number of opportunities to take a virtual plot tour and learn more about the ongoing research. The virtual plot tour was sponsored by the Ohio Soybean Council.

Strip intercropping was the focus of one plot on the virtual tour. This is a practice that involves growing corn and soybeans in alternating strips within the same field. Preliminary findings were that the strip intercropping practice increased yield, and decreased soil compaction.

Remote Sensing was the focus of another series of plots. Remote sensing is the science of acquiring information about an object or phenomenon by measuring the emitted and reflected radiation. 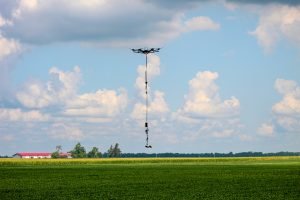 Remote sensing data can be collected in four primary ways: land-based, UAVs, airplanes, or satellites. Data is collected with land-based systems, such as a hand-held device, or machine mounted sensors. These would provide real time measurements of crop conditions that can be used to make in-season management decisions. Unmanned aerial vehicles (UAVs), (a.k.a. drones), can be fitted with a variety of different types of sensors that provide high resolution farm data. Airplanes can collect similar high-resolution data as the UAVs, but over a much larger area. UAVs can get closer to the crops for more specific data. Satellites allow fields to be monitored year-round from space.

Depending on the method of data collection, a variety of information is gained about a field’s attributes. Physical features such as slope, elevation, drainage modeling, soil moisture, and surface residue can be measured. In-season, data can be collected on crop emergence and plant stand; crop health or stress levels; weed, disease and insect pressure; and photosynthetic activity. At harvest time, data on grain moisture and nutrients, along with soil health and surface residue can be measured with remote sensing technology.

The effects of pre-emergent herbicide on interseeded cover crops was also researched. This practice is primarily for use in corn. Cover crops provide multiple soil health benefits. One challenge in Ohio is having enough time to establish cover crops in the fall, following corn harvest, to ensure enough growth to survive the winter. Interseeding the cover crop between the corn rows at roughly the V5-V7 growth stage of the corn is being studied. Seeding cover crops at this time allows cover crop species that require an earlier planting date to be established rather than waiting until after corn harvest.

Problems that farmers may encounter with this weed control strategy are that there can be enormous weed pressure at the time of the post-emergent application, and also the potential selection of herbicide resistant weeds.

Studies were conducted this year looking at cover crops interseeded in June, in corn at the V5 stage. They were conducted using forage brassica, cereal rye, crimson clover, annual rye, red clover, hairy vetch, radish, rapeseed, and turnips. There was adequate moisture to germinate all the cover crops, however the dry weather did not allow all the species that were seeded to survive. Of those that did survive, the annual rye grass and red clover tolerated the herbicide combinations the best. It is suspected that the low precipitation rates not properly activating the pre-emerge herbicides. It is highly recommended that farmers understand their corn herbicide program and any residuals. to ensure a successful cover crop establishment when interseeding. 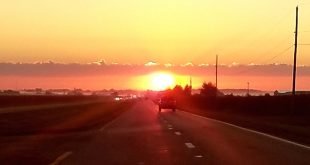