As one of my all-time favorite “win-win” PR efforts in the outdoors industry, Mepps fishing lures continues its popular Squirrel Tail Recycling Program this month. The tails are used for the hand-tied, dressed hooks of their world-famous, fish-catching lures, a program that has been ongoing for more than half a century.

“Squirrels are good eating and we can reuse their tails for making the world’s No. 1 lure,” said Josh Schwartz, Mepps Communications Director.

Antigo, Wisconsin-based Mepps buys fox, black, grey and red squirrel tails and will pay up to 26 cents each for tails, depending on quality and quantity. Plus, the cash value is doubled if the tails are traded for Mepps lures.

“We do not advocate harvesting of squirrels solely for their tails,” Schwartz said.

For details on the Squirrel Tail Recycling Program, visit mepps.com/squirrel tails, call 800-713-3474 or tune-in to the Sept. 5 broadcast of Buckeye Sportsman when I interview Schwartz on the show. To locate a station and show time near you, visit buckeyesportsman.com or see the listing published above.

Ohio Department of Natural Resources (ODNR) Director Mary Mertz recently designated the Tuscarawas River in eastern Ohio as the state’s 15th official water trail, a stretch of waterway that has been identified as a recreational resource with maps, signage, and informational resources that show official access points, amenities, and safety information.

“The Tuscarawas River Water Trail will bring communities together and provide awesome paddling experiences while encouraging environmental awareness,” Mertz said.  “Whether looking for that big catch or a relaxing paddle, the water trail offers something for people of all ages.”

Director Mertz joined Muskingum Watershed Conservancy District (MWCD) Executive Director Craig Butler for the first official paddle on the newest state water trail. The MWCD partnered with communities and local governments in four counties to make the water trail a reality, and each will to contribute to the access and maintenance of the river trail.

“The Tuscarawas River has a rich history and has supported commerce and agriculture for generations. It is one of the main tributaries in the MWCD and is a great addition to the other recreational opportunities we offer at our parks,” Butler said.

The Great American Outdoors Act became law after being signed by the President, permanently funding the highly successful Land and Water Conservation Fund which, for the past five decades, has helped provide access to recreational areas, trails and waterways throughout the nation. Important to anglers and hunters, the Great American Outdoors Act ensures that $15 million annually is dedicated to expanding public access for fishing and other forms of outdoor recreation.

It also creates the “National Parks and Public Land Legacy Restoration Fund” to address the crumbling infrastructure on America’s public lands and waters. This program will provide $9.5 billion over five years to the National Park Service, Bureau of Land Management, U.S. Fish and Wildlife Service and U.S. Forest Service (USFS) to improve trails, campgrounds, roads, visitor centers and other infrastructure.

The event launched from the Shelby St. Public Boat Launch in Sandusky and was hosted by the City of Sandusky. The FLW High School Fishing presented by Favorite Fishing Lake Erie Open was a free, two-person (team) event for students in grades 7-12 and open to any FLW and Student Angler Federation-affiliated high school club. The top 10 percent of teams at each Open event along with the TBF High School Fishing state championships will advance to the 2021 High School Fishing National Championship. The High School Fishing national champions will each receive a $5,000 college scholarship to the school of their choice.

Full schedules and the latest announcements are available at HighSchoolFishing.org and FLWFishing.com.

FYI: the FLW is the world’s largest tournament-fishing organization, providing anglers of all skill levels the opportunity to compete for millions in prize money across five tournament circuits. Headquartered in Benton, Kentucky, FLW and its partners conduct more than 290 bass-fishing tournaments annually around the world, including the United States, Canada, China, Italy, South Korea, Mexico, Namibia, Portugal, South Africa, Spain, and Zimbabwe. 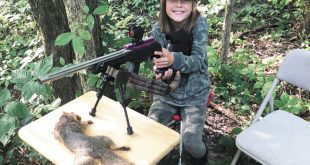 Fishing participation on the rise

By Mike Ryan, OCJ field reporter This summer, embrace the proverb: ”Everyone should believe in …