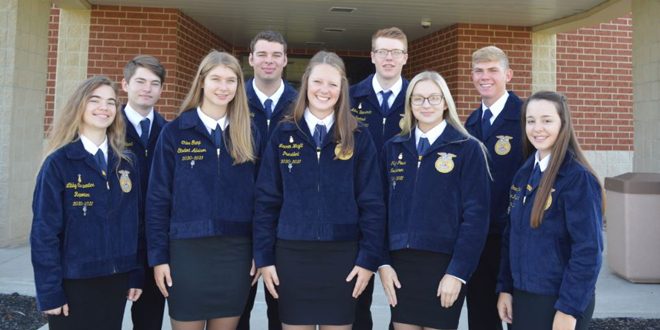 The National FFA Chapter Award program recognized FFA chapters for developing and conducting a detailed Program of Activities (POA).  These activities and projects provide opportunities for members to achieve in the areas of student, chapter, or community development.  Every year, chapters are recognized as having earned a one-, two-, or three-star rating on their National Chapter application.

Michael Bair will be recognized for a being a National Proficiency Finalists. He has placed in the Top 4 in the nation in the area of Poultry Production. Bair started Michael’s Pastured Poultry in which he raises meat chickens and markets them through social media and other outlets. He also has job placement on his family’s organic farm. He will submit a video of his business in order to vie for the title of National Proficiency Winner. He will earn a cash prize, plaque and recognition during the Wednesday, October 28, 7pm nationally broadcast convention session.

Liza Bair, Kylie Blair, and Zach Kronenberger will receive the American FFA Degree. This is an honor that over 4,000 FFA members across the country will accomplish. Their applications were forwarded to the National FFA because they have been a successful leader, been involved in various community service activities, earned at least $10,000 from their Supervised Agricultural Experience program, and been an active member of the FFA.