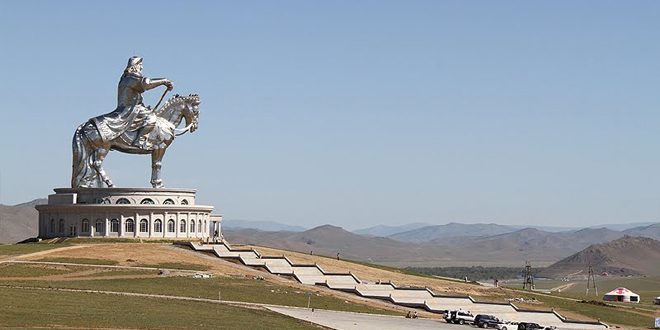 Mongolia in 1206 was inhabited by numerous tribes. They lived on the steppes (plains with virtually no trees), surrounded by the Altai, Khanghai and Khentii mountains on the Russian border. (I was on those steppes last winter while in Mongolia with the V.E.T. Net mission project of the Christian Veterinary Mission. The steppes are huge, surrounded by sky, mountains and, when I was there, -40degrees F air.)

Now back to the 13th century — or just before the turn of that century — when a boy named Temujin and his brother were growing up fatherless. Because of this, they and their mother were shunned from their Mongolian tribe. They scavenged for food, picking through garbage, digging root vegetables and hunting for game while trailing behind the nomadic Mongol warriors.

As a teenager, Temujin became a member of the Mongolian raiders on horseback. By the age of 40 he had worked his way up to major general. He managed to unite many of the nomadic Mongol tribes and was awarded the name Genghis Khan, the first Great Khan (king) and Emperor of the Mongol Empire.

Genghis Khan led 100,000 warriors on horseback to attack enemy tribes. Their horses were smaller than our horses, weighing 700 to 800 pounds. Mongol horses were noted for their endurance. Mongol warriors would ride them all day at breakneck speed. If horses broke down from lameness or exhaustion, the Mongol warriors would kill and eat them. The lean, protein-rich horsemeat gave the warriors a nutritional edge in endurance.

They would ride in at dawn firing their arrows. Their arrows were incredibly accurate because of the ability to stand up in their unique saddle stirrups while releasing their bows. They never lost a battle despite incredible odds – 100,000 Mongol warriors challenging sometimes half a million enemy soldiers or more in any given campaign.

The Romans were no match. Under Genghis Khan, the Mongols grabbed more territory in 25 years than the Romans did in 400.

Though undeniably tough and violent, the Mongols had a few redeeming qualities.  Genghis Khan distributed the spoils of their plunder to every member of the Mongol nation — not just his friends and special agents. The Mongols were so successful in their onslaughts they ran out of warehouse space to store the goods they captured — like Persian rugs, gems, gold, artwork, jewelry and pearls.

Genghis Khan routinely appointed women to administer his government in countries that submitted to him.  He had four wives and three daughters. Eventually each was appointed to serve as an administrator of a captured territory. It is believed that he chose women to be administrators as they proved very capable in their duties. And as a boy, Genghis Khan was routinely persecuted by male soldiers.

In selecting teams of administrators he was careful to appoint a representative of each religion to work together. And he showed no favoritism to family and friends. He based his appointments on competence.

The Mongols never lost a battle, that is, until late in Genghis Khan’s reign when they attacked Chinese warriors led by Jalal ad-Din. The next year Genghis Khan returned to attack this Chinese nation (at the time there were three Chinese dynasties) and routed them. Jalal ad-Din escaped by jumping with his horse from a cliff into the raging waters of the Indus River. Mongol warriors were ready to release their arrows to kill Jalal ad-Din, but the Great Khan stopped them, to allow his escape.

Genghis Khan sought a relationship with God. He tried every religion, such as Buddhism, Islam, Taoism, Confucianism, Hinduism, Zoroastrianism, Manichaeism, Christianity and Methodism. (Just kidding on that last one. My intent was to stir up my pastor. Methodism appeared centuries later.)

Mongol law under Genghis Khan forbade anyone to disturb or molest anyone for their religion. This was the first law of Genghis Khan. In his religious tolerance, he was way ahead of Thomas Jefferson and America’s other Founding Fathers, whose influence resulted in the First Amendment to the United States Constitution, which reads in part: “Congress shall make no law respecting an establishment of religion, or prohibiting the free exercise thereof.”

I find it interesting that a biography of Genghis by French scholar François Pétis de la Croix describes Genghis Khan’s stance on religion.It was published in 1710, making it an available reference for our nation’s founders. In fact, Jefferson, author of the Declaration of Independence and Virginia’s law of religious freedom, was known to have bought multiple copies and used the biography as a model for the Virginia laws developed by their legislature prior to the U.S. Constitution. That’s astounding! Freedom of religion was the first rule established in the Mongolian empire in 1206 — more than five centuries ahead of us! 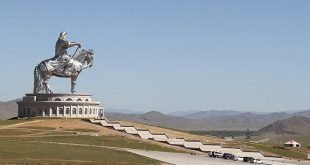