The OSU Extension, Agronomic Crops Team and the e-Fields Program had a number of research plots once again at the Molly Caren Agricultural Center in 2020. The online review gave guests a number of opportunities to take a virtual plot tour and learn more about the ongoing research. The virtual plot tour was sponsored by the Ohio Soybean Council.

Harold Watters, OSU Extension, Field Specialist Agronomic Systems, presented a poster session discussing nutrient deficiencies and the current research being conducted across the state, particularly as it relates to sulfur deficiencies. To start the discussion, Watters pointed out that while there may be sulfur deficiencies in some fields, the broad application of sulfur to fields across Ohio is not necessary yet. “There are deficiencies in some fields out there, and they will probably be seen on the sand and gravel fields, and lower organic matter soils,” Watters said. 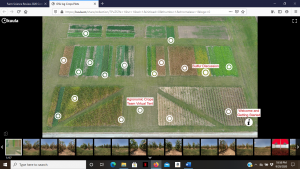 Sulfur can come from many different sources.

“The sulfur in our fields comes from the soil organic matter. It is mineralized the same way nitrogen is mineralized during the growing season. Warm moist conditions allow the process to begin,” Watters said. “The other place we get sulfur in Ohio is from coal fired power plants.”

Watters explained that Ohio is surrounded by states with coal power plants, including some along the river here in Ohio.

“When the coal fired power plants would emit sulfur, Ohio would get as much as 40 to 50 pounds (per acre) from those power plants. Now with the burning of natural gas and low sulfur coal, a lot of that has gone away,” Watters said.

“Sulfur leaches, and will move through the soil profile similar to nitrates, and run out into the tile, and into the streams. Since we are not replenishing sulfur as fast as it is lost, deficiencies may be noticed on sandy, gravel, or low organic matter fields first,” Watters said.

It was noted that not all sulfur deposits from the power plants has been eliminated, just greatly reduced. It was also noted that even the lower organic matter soils will mineralize sulfur, just not as much as the crops will need in a given season.

“Farmers may need to apply sulfur in some cases where deficiency is noted, but probably not the full 15 to 20 pounds,” Watters said.

When evaluating the impact of adding sulfur on the soybean crop, a positive response was observed in four out of the five years, however when analyzed statistically, there was no statistical yield difference in the response between the plots with sulfur added, and those without.

“Visually there was a response to the sulfur, but statistically there was not a significant yield difference,” Watters said. “In high yield environments a difference would be expected to be observed first.”

In soybean research conducted by Dr. Laura Lindsay, Ohio State Soybean Specialist, only one in eight on-farm trials conducted across Ohio showed a yield difference. It was 3 bushels per acre in 2019.

Watters suggests that to be successful, if a farmer suspects a sulfur deficiency, they should conduct some diagnostic work. It may appear sporadically in the field at first. Farmers should pull leaf samples from the “good” and the “bad” areas and compare those. Watters suggests that rather than applying sulfur to every acre, farmers should conduct strip trials in their fields.

“Before planting put a strip of sulfur or sulfate, such as gypsum (CaSO4) or ammonium sulfate across the field, and compare the appearance in-season and at harvest,” Watters said. “For livestock farmers applying manure, the fields will receive sulfur from the manure.”