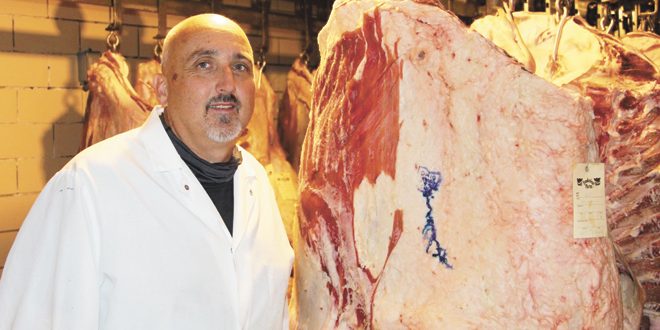 By Dusty Sonnenberg and Matt Reese

Willie Murphy works with his family on their diverse Clinton County operation that includes crops, cattle and a booming 2020 freezer beef business.

“The freezer beef has had a huge increase in demand. Normally we do 50 to 60 a year and so far we have sent over 60 head to the butcher shop and have another 50 head yet this year and another 20 head sold into next year. It doesn’t matter what butcher shop you talk to, they are all booking into this time next year. We have appointments all the way through 2022 just to fill the demand. A lot of people who are buying are asking me to just put them down for next year. That is good for us and good for the people we are selling to so we can cut out the middle man and sell direct,” Murphy said. “Normally we sell 280 to 300 head of fat cattle a year to the local stockyards or the butcher shop. When freezer beef demand started picking up and we started selling more and more and we added more appointments. We backed away from selling to stockyards to meet the freezer beef demand.”

Murphy credits a strong, established relationship with a local butcher shop for the freezer beef success this year and sees a promising future ahead.

“We started using the butcher we are with now four years ago. This year we just started adding our name to any open dates they had. We have had a couple of people cancel on us and literally within a half hour if someone canceled we could sell it to someone else with one or two phone calls,” he said. “I don’t think the demand will be as high as it has been after all of this is over, but I do think a lot of people will still buy meat this way. Now that people are reverting back to this beef off the farm, they all tell me the quality and taste of the product they get from us off the farm is not even comparable to anything you can but at the grocery store. I’m hoping that high quality will keep people buying it off the farm. People want to know where their food came from and I think this will continue, especially with the younger generation.”

There has been a similar trend in northern Ohio with exploding demand for local meat products.

“We first noticed our bookings filling up around the first of April,” said Jon Lugbill, owner of Brookview Farms, Meats and BBQ near Archbold, Ohio. “The scare of a meat shortage caused by the media seems to coincide with when we started to see our business pick up. Since then it has been a rapid ramp up, and we are now scheduling out for appointments in January 2022.”

The Lugbill family has been involved in the meat cutting business for well over a half century.

Brookview Farms, Inc. was started in 1962 by Leon Lugbill. Leon started the business on his family farm by cutting and wrapping meat for his family, friends and neighbors. He also raised “Tender Corn-fed Beef.” Since that time the family business has expanded and is now under the management of the third generation. Over the past 58 years it has been passed down from Leon, to his son Jack, to now to Leon’s Grandson, Jon. Originally the business only processed cattle in the 1960s and 1970s, and then in the late 70s and early 80s,when the cattle economy was changing, Leon started processing hogs and sheep to help solidify his business.

Bookview Farms does custom meat processing, and has a retail meat counter and country store. Brookview Farms annually processes anywhere from 950 to 1,100 animals per year (combination of cattle, hogs and sheep), however that number is increasing with the changes that have been experienced in 2020.

“People were moving away from raising their own animals and having meat processed, so the BBQ catering allowed us to better utilize our freezers, coolers and staff,” Lugbill said. Brookview Farms Meat and BBQ offers catered barbeque services for groups from 100 to 10,000.

“We have barbequed everything from chicken and ribs, to alligator, ostrich and elk — anything meat,” he said.

In January of 2016, Brookview Farm assumed the management and operations of a local slaughterhouse that they had done business with for a number of years. The slaughterhouse is still privately owned by the original family.

With the ever-changing consumer lifestyle, and trends that were moving away from buying meat, filling a freezer, and cooking at home, the industry has experienced serious challenges in recent years.

“Local processing has been on a downward slope for several years. We have stayed steady over the last 4 to 5 years because several other local plants have restructured. About 4 local plants went to ‘custom kill, no inspection’ or ‘custom not for sale kill,’ which is designed strictly for family use only, and not for resale. We have kept the ‘fully inspected’ status, and that allows for resale. We have custom processing customers traveling over 100 miles for our services since we are fully inspected,” Lugbill said.

For the fully inspected plants, there are different levels of inspection. Some plants are state inspected, which in Ohio is done by the Ohio Department of Agriculture. Meats from plants that are state inspected can only be re-sold in the state. There is also federal meat inspection, which is done by the U.S. Department of Agriculture, and allows the meat to be sold across state lines. For a processor to be federally inspected, the slaughterhouse they work with must also be federally inspected.

While the recent increase in business has been good for Brookview Farms, the increase in demand has caused new struggles for local farmers.

“Farmers are frustrated when they are not able to get appointments for slaughter and processing for over a year out,” Lugbill said. “We have picked-up a few new customers, but reviewing the increase in custom processing, a lot of the increase has actually been existing customers that have expanded the numbers they are processing. For example, in past years, a farmer may have sold 10 to 12 animals a year for freezer meat, and ran the rest through the sale barn. Now with the pandemic, many have increased their freezer meat sales and those extra animals are now for freezer meat and they are having them processed here,” Lugbill said. “Much of the increase has been existing customers increasing their numbers.”

Retail meat sales and consumer trends have also changed since the beginning of the pandemic. “There has definitely been an increase of people cooking and eating at home. At first customers were scared there was a shortage of meat because of what they had seen on the news, or the grocery store meat case had limits,” Lugbill said. “They are still asking how long the supply is going to last, and if it is going to run out. There was also a price spike that caused concern. Now many are relieved that the meat is still available and the price has come down some.”

Lugbill is also optimistic this local food/meat trend will continue.

“A lot depends on what happens with the pandemic. Many people have realized that they can get the same restaurant quality eating experience when cooking at home, and feel safer buying meat that is locally sourced,” Lugbill said. “That trend will likely continue, but could easily change if incomes go down, and if some of the stimulus money does not continue. They won’t spend the money on meat if things get tight.”

An ongoing trend in the local meat processing industry has been the closing of local plant kill floors (slaughter houses) and shifting from custom processing to retail sales only, (bringing in boxed beef, and cutting it in-house for retail cuts). In Northwest Ohio, there had been over a dozen local meat processors that farmers could work with to have animals slaughtered and processed. Now only a fraction of those are still doing custom processing, and even fewer are fully inspected for resale.

“Locally, the kill floor is not our bottle-neck. The processing and wrapping of meats are what currently limits our capacity,” Lugbill said. “We are working 12 hours a day, five days a week. Finding and keeping good employees is a challenge for everyone.”

Several concurrent factors are causing stress on an already challenged local meat processing industry. The increase in government regulations, an aging population of owners, and (until recently) consumer trends away from buying local meats and preparing meals at home, have occurred simultaneously. Similar to the rest of the agriculture industry, fewer young people are returning to the family business. The cost of entry, and intense governmental health and safety regulations make the ability for someone to start new facility extremely difficult. Lugbill is constantly trying to figure out how to get young people excited about the industry.

“Young people are not as interested in learning the skilled trades as they once were, and cutting meat is at times as much an art as it is a science. There is a need in the ‘skilled trades’ across the board. Working in a slaughterhouse or meat processing plant is physically strenuous, and not glamorous, but good money can be made, and there is some flexibility,” Lugbill said. “Those that are ambitious and learn the skill can be creative and employ some ingenuity to improve the process and make things faster and easier.”