We finally got started on Oct. 1. We ran some of the very first corn that was planted on May 13. It was 105-day corn and it was 21% to 22% moisture, which is drier than we thought it would be. The yield was pretty good for being early corn. We ran that and moved to corn we’d planted on May 16 and it was a fuller season corn. We thought the moisture would be in the mid-20s and it was 30%. We ran about four loads of that and decided that was enough. That was a little too wet to handle.

We have been hearing around the area that a lot of corn moisture has been in the mid- to upper 20s. The ethanol plant in Bloomingburg is paying around $4 for dry corn because everyone is cutting beans, so there has been some corn run around here that is pretty wet. I think yields will be pretty good and the later planted corn will be better, though the early corn is by no means bad.

We started running beans on Saturday and they were around that 14% mark and yesterday afternoon they got down to 9%, which is drier than I want them to be. We don’t want to wait, though. The fall of 2018 was like a nightmare gone bad. When the good weather shut off that year it was 60 days before we were able to get back in the field. We haven’t forgotten about that.

We have been hearing about good bean yields and we are very happy with our bean yields so far. So far what we’ve run have probably been some of the best beans we have ever raised yield wise. Overall I think our bean crop in this area will be phenomenal.

The other day we saw our neighbor had a combine fire. Everyone was OK, but it is very dry out there so stay safe.

I can’t remember a nicer stretch of weather than what we’ve had. I keep looking at the extended forecast and I don’t really see it coming to an end any time soon. There is a little chance for rain late Sunday or early Monday but I don’t believe they are calling for a large amount.

We are in the full grind for harvest. We are approaching the halfway point. We are down to less than 300 acres on beans. We are getting into some later season maturities and we are fighting with some green stems. The beans themselves are dry but some of the stems are still so green and they got really tall in some of our sands — it is a lot of plant to go through the machines. We’ve actually pulled out of soybeans now and gotten into corn the last couple of days.

We plant 30-inch row beans and we have been dropping our populations down around 120,000 and we have not seen any lodging. But when you reduce the population like that, you can get larger stems and when they are green it does make the combine work. The shorter season beans were the worst yielding and the later the bean got, the higher the yield went. The shorter season beans were further along and not as able to take advantage of the late rains.

The crops keep surpassing my expectations. The beans have done really well and the corn keeps trending right along at average, which is really good for this year considering how hot and dry we were.

It seems like we really turned the page on drydown for the corn. We have lost quite a few points of moisture in the last week. I like to take corn off right around 20%.

We are full tilt. We’ve been doing beans all week. We are getting along really well with the early beans and are probably about 70% through the beans planted in the first part of May and it is going well. We’ve had great weather and we are mowing off the acres. Yields have been all over the board. In the higher ground in the driest areas, yields are around 30 to 45 bushels and in the low ground yields are in the 70s and 80s and even higher. Overall the yields are around 60 or maybe a little below, but I think yields will get better as we get into the later stuff. For the conditions we had through the summer, though, we’re impressed with the yield.

We started off with corn. We had some at the home farm that was down to 18% moisture. We shelled that last week and those yields were 150 to 175 bushels. We finished the early varieties and got into some 25% and 26% moisture corn. By then the beans were fit, so we are waiting on Mother Nature to dry that corn down a little more. I think yields will improve as we move into the later planted corn.

We are seeing waterhemp problems and that is going to be an issue we have to address going into 2021.

It has been exciting to see markets move higher.

We couldn’t ask for much better weather for harvesting. If you’re not running soybeans, I don’t know what you’ve been thinking about. I’d say we’re pushing 50% of the beans harvested around here. Yields are average.

We have planted more wheat than we have in several years in this area. It is a cash crop in the middle of summer and more people are looking for that cash flow. And a lot of guys are realizing that double-crop beans don’t have to yield 40 or 50 bushels per acre to be a positive effect on your pocketbook. I had one guy tell me that the double-crops we going to 10 bushels and he was going to mow them off. What is the price of beans? $9? You can’t run your combine across the field for $90 an acre?

The hay market is really good. There was a lot of alfalfa planted around here. Some of it was planted too late for me, even though it is beautiful weather.

The pastures are gone around here unless you have a lot of pasture acres with just a few cows. Most everybody is feeding hay.

The dry weather is letting us get across these acres without hurting soil structure. Any time we are out there when it is too muddy we are destroying structure and that has certainly happened the last couple of years. It would be nice to have a year where we can harvest without causing compaction problems. I think the compaction from the last couple of years is hurting yields this year.

Even with cover crops and doing things to address it, it can take 5 years to get rid of those compaction problems. We have not had any deep freezes either, which can help with compaction. 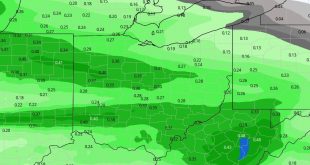 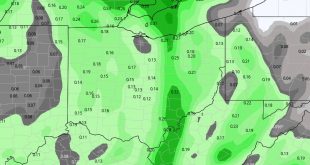 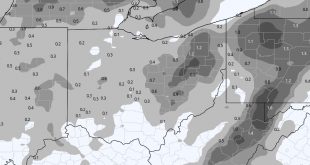 January 14, 2021 -- Another "mild-ish" day, but mother nature will soon return us to a winter pattern. Today's south flow and what ever sun we can manage before clouds build will take us to above normal temperature levels...