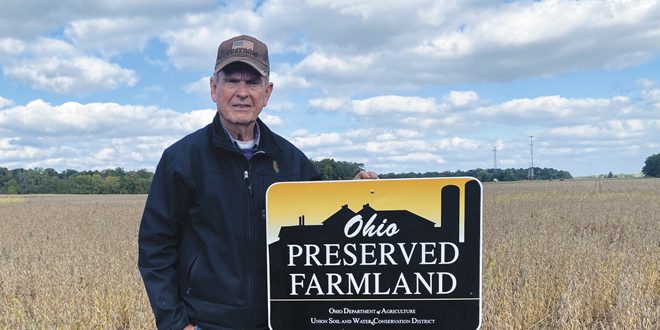 Is the future of Ohio farmland preservation at stake in Union County?

Arno Renner predicted the future for his farm and he did not like what he saw. He decided to take action to preserve his farmland near Marysville in Union County and in the clear path of potential development. To protect his farm for perpetuity, Renner donated the development rights to his 231.25 acres of land valued at over $3.5 million on Nov. 5, 2003. The Ohio Department of Agriculture (ODA) accepted the donation. At the time, the ODA Office of Farmland Preservation entered into an agreement with the Union Soil and Water Conservation District to monitor the easement on the land.

The Agricultural Easement Donation Program (AEDP) is one tool for landowners to protect their farm’s soils, natural resource features, and scenic open space. It provides landowners the opportunity to donate the easement rights on viable farmland to the ODA. In addition to the donation program, the State also has an easement purchase program using Clean Ohio Conservation Fund.

With an approved and accepted easement donation, or a purchased easement, ODA assures the land will remain in agricultural use forever. According to the ODA website: “ODA is committed to enforcing all agricultural easements that it holds to preserve the integrity of the easement and to comply with IRS requirements related to landowners who receive federal tax benefits for donating an agricultural easement. If ODA staff find a violation, they will work with the landowner and local partner to resolve the situation. If that attempt fails, the state will take legal action to enforce the easement.”

It did not take long for Renner’s fears of the development of his land to be justified.

“In about 2005, the city of Marysville wanted to put in a sewer line, which included a 40-foot wide, 40-foot deep trench for a gravity fed 6-foot diameter sewage line right across our farm from Industrial Parkway over to U.S. Rt. 33,” said Don Bailey, the nephew of Renner and the current trustee of the protected land. “We went to ODA and after considerable negotiations, we were able to come to an agreement with the city of Marysville that they could put their line under the easement under the township road, and not on our farm. That came about primarily because Director [Fred] Dailey at ODA at that time stood up to defend the easement and told the city of Marysville that this was not permitted across a preserved farm and that the State would fight them if they tried to use eminent domain. ODA stood by their part of the easement. The farm has to maintain agricultural purposes forever.”

Again in 2008, under the leadership of Director Robert Boggs, the ODA fended off a water line proposed by a private developer on the land donated by the Renner Trust (then also overseen by Bailey), this time involving Ohio’s Attorney General Nancy Rogers who determined “any water line must be located in the existing right-of-way and placement outside of that area is counter to the preservation of the Bailey property as farmland.”

With these battles in mind, Bailey was not overly concerned when he saw surveyors in the area for Columbia Gas last fall, knowing he could rely on the ODA to once again step up to defend the easement on the land if needed.

“Columbia Gas was exploring the possibility of putting a large high-pressure distribution line across two of our preserved farms from 33 over to Industrial Parkway. We thought ODA would come to bat and we’d be OK. This time it is a different ODA, though. They caved immediately and told us in no uncertain terms that it is OK for the gas line to go across our property because there is a clause in the easement that says we are allowed to install utility lines to our farms,” Bailey said. “They took that to mean that any utility could go across any place they wanted.”

Bailey has tried to defend the easement this time around in a number of different ways in this Marysville Connector Pipeline Project. He said he spoke with Columbia Gas representatives in the fall of 2019 and told them the easement would not allow their gas line to cross the preserved farmland. He submitted a letter filed as a public comment to the Ohio Public Utilities Commission on Jan. 6, 2020 (Case No. 19-2148-GA-BLN) to the Ohio Power Siting Board objecting to the gas line crossing the preserved farmland and referencing the ag easement on the land. Bailey’s lawyer contacted ODA on multiple occasions in February of 2020.

Bailey then reached out for more help with the issue in a letter to Governor Mike DeWine back in March, and a reply came from the ODA Office of Farmland Preservation, which again operated very differently than in the past.

“The Office of Farmland Preservation came back and said, ‘We don’t see any reason to prohibit this pipeline from going across your property. We will not help you in the case of eminent domain and we suggest you settle with Columbia Gas.’ That is the kind of support we have gotten from the ODA,” Bailey said. “We donated the easement of three farms to the state of Ohio in good faith that they would live up to their end of it. Our hands are tied forever. Honestly it seems like it all depends on the interpretation of ODA. Nothing has changed in the easements, it is the same language, and we have a precedent already set.”

State representatives were contacted by Bailey in February and March of 2020 and they said the governor’s office was unresponsive. Bailey also asked ODA’s Farmland Preservation Advisory Board to bring up the gas line issue for discussion at their June 17, 2020 meeting.

“ODA is the one who has a statutory and moral obligation to intervene by defending the easement. I tried everything a reasonable person could try,” Bailey said. “If there was a special form we were supposed to fill out or a hoop I was supposed to jump through in order to get ODA to defend our easement, nobody at ODA told me.”

On Aug. 27, 2020 the Ohio Power Siting Board issued an Opinion, Order and Certificate on the Marysville Connector Pipeline Project with six votes in favor of the project coming in from board members representing the state’s Public Utilities Commission, Environmental Protection Agency, Department of Natural Resources, Department of Health, Development Services Agency, and the board’s public member. Sarah Huffman, with the ODA Office of Farmland Preservation, served as the designee for the Ohio Department of Agriculture and recused herself from the vote on the issue (according to the Ohio Public Utilities Commission website at dis.puc.state.oh.us/TiffToPDf/A1001001A20H27B50618D03105.pdf).

From a broader perspective, if this new precedent is set, and the pipeline goes through the protected land, there are statewide farmland preservation concerns that existing easements may actually attract more of these kinds of development efforts rather than deter them.

“We’re concerned that once one utility is allowed to go through, it is a natural corridor for all utilities to start going through. Since it is preserved as farmland, the value of it is much less than the commercial value of the land across the road. It is the cheapest place for utilities to go through. That is what we are afraid of. If the State won’t defend it, preserved land will be targeted for that particular reason,” Bailey said. “This is not just about us. Right now I could not recommend to another farmer that they give their easement to the state. I’d hate to see that because this is a good program and people have invested a lot of time and money in it. Many farm owners want a way to preserve their farm. It is disheartening to see this. If there are no teeth in the easement, then the program is dead.”

As the sponsor of the Arno Renner Trust, the Union Soil and Water Conservation District Board has also weighed in on the Marysville Connector Pipeline Project in a resolution sent to ODA: “…The Union County SWCD Board of Supervisors strongly encourages ODA to thoughtfully reconsider any real or perceived consent granted to Columbia Gas to utilize any portion of the proposed gas main route that will impact farmland protected by agricultural easements. ODA should work with Columbia Gas to fully evaluate mutually beneficial alternative routes for this project that do not impact preserved farmland protected by agricultural easements.

“Let it also be resolved that the Union County SWCD Board of Supervisors fully recognizes the long term detriment to the public trust and confidence in the ODA Office of Farmland Preservation if support for protecting the agricultural easements is not consistently and energetically applied in accordance with legal precedent and the legal terms of the easement language.”

“Ohio’s farmland is a resource we must protect,” said Dorothy Pelanda, the current ODA Director.

Potentially of note in the Union County project with Columbia Gas, Director Pelanda’s husband, Samuel E. Gerhardstein, is currently a registered lobbyist for Columbia Gas, according to the Ohio House of Representatives Joint Legislative Ethics Committee

The ODA, however, pointed out that: “Neither ODA nor Director Pelanda have had any involvement with the siting of this project.”

The ODA also pointed out in a statement that, in this particular case in Union County: “The deed terms in the easement…do not prohibit installation of a pipeline as long as the agricultural use of the property is maintained. ODA has committed to working with the utility and landowners to ensure that any disruption will be minimal, and the affected property will be returned to agricultural use.”

In addition, the ODA said there are some differences this time around with regard to the land in the Renner Trust.

“In 2005, Union County Soil and Water Conservation District raised concerns to ODA that the nature of the sewer proposal would cause irreparable harm to the agricultural use of the property. No similar concerns were raised to ODA about the impact of the proposed gas pipeline,” ODA said in a statement. “Also, unlike the 2005 sewer project, approval of the proposed pipeline project was a matter for the Ohio Power Siting Board, which approved the project on Aug. 27, 2020. No interveners opposed the pipeline in that public proceeding.

“This particular easement was donated and not purchased by taxpayer funds.”

The matter remains unresolved. Bailey, and all with an interest in the preservation of Ohio farmland, are watching and waiting to see how it all unfolds.