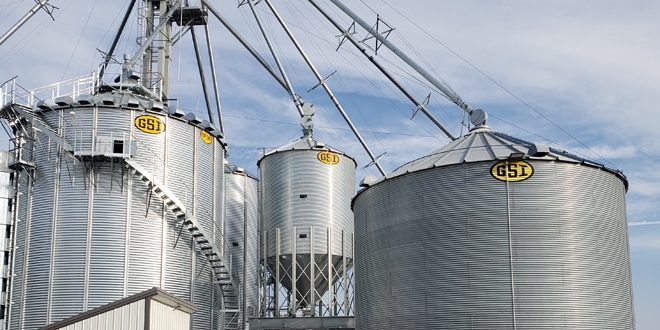 Todd and Jeff Matthews in Van Wert County were able to add efficacy to their operation with a new grain system.

Todd Matthews and his brother Jeff grew popcorn for over 30 years on their operation near Ohio City in Van Wert County. Two years ago, however, their popcorn production customer relocated to irrigated acres in the western U.S, prompting the brothers to switch to field corn.

“2018 was an exceptional corn year, which made it really challenging to deliver a lot of corn in the fall,” Todd said. “We knew we needed to increase our corn acres, and that required additional storage capacity. We had expanded our existing grain system as much as we could. We knew we just needed to go with a bigger and better system.”

In 2019, working with their local GSI dealer, Advanced Grain Systems, Matthews Farms installed a new grain handling and storage system. Four bins from the existing system were relocated to the new site — three with 20,000-bushel capacity and a fourth with 25,000 bushels.

In addition, four new bins were added: a 48-foot diameter, 77,000-bushel dry storage bin, a 10,000-bushel wet bin, a 30-foot diameter TopDry bin with 19,000 bushels of capacity and 5,000-bushel overhead bin for grain load-out. To move all that grain efficiently, the project included two new grain legs. An 8,000 bushel-per-hour leg sends grain to the wet bin or dryer, while a 5,600 bushel-per-hour leg transports dried grain to either the storage or off-load bins.

“It all worked out way better than I thought it might,” Todd said. “Everything all lined up and worked just like it was supposed to.”

He also has been impressed with the performance of the GSI TopDry unit. It houses a dryer in the top part of the grain bin. The grain is held in a shallow layer on a peaked floor just under the grain bin roof where it is dried. Once dried, the grain is dumped into the holding area below for storage. A smaller cooling/aeration fan captures heat from the previously dried grain and pushes it upward to help dry the next load.

The timing of the new system project was fortuitous. Not only did it enable the Matthews to handle more capacity, but also to cope better with the wet conditions of the 2019 growing and harvest seasons.

“It has performed very well,” Todd said. “It’s a whole different type of drying than we were used to. With the moisture range we dealt with, from 28% to 22%, you’d expect spikes and valleys in a new drying system. But we were really pleased that our corn came out in the 14.5% to 16% range. The efficiency of the TopDry is head and shoulders better than what we had.”

Midway through the 2020 harvest, the Matthews said the expanded capacity and efficiency of their new grain system was again making the harvest much more manageable.