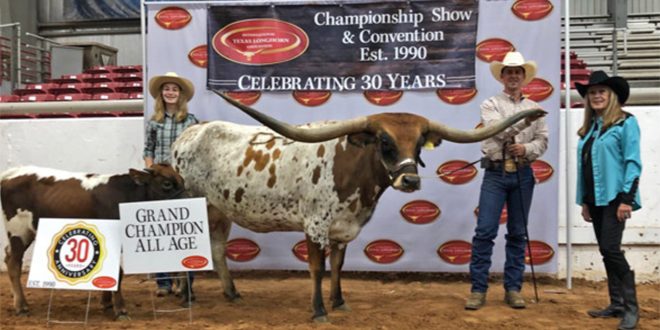 The 30th Annual International Championship Texas Longhorn Show and Convention was held at Glen Rose, Texas Oct 8 – 10. Entries were competing for Championship awards from 19 states. The most entries were from Texas. A record of 581 entries came to capture the national awards.

The All Age ITLA Champion Halter female was exhibited by Kirk and Linda Dickinson of Barnesville, Ohio. The new champion is “Kookachex,” age 5, with a whopping horn spread of 87” tip to tip. Kookachex was judged by prominent Texas Longhorn producer Lana Hightower from Van, Texas. She was shown with her calf at side by Kara Dickinson and Doug Burris.

Free range exhibiting in Texas Longhorn shows does not allow placement, posing or special positioning during the class. Each critter moves, poses, stands and is judged in a very natural and normal pose. It is a very honorable exhibiting process not used by most breeds for show judging.

The International Texas Longhorn Assn (ITLA) was founded in 1990 and currently has just under 1,900 members. ITLA registers pure Texas Longhorn cattle, documents pedigrees, and has a member driven show and awards system. ITLA is the only Texas Longhorn registry where all members get to nominate and elect by mail-in ballot their own president and all officers/directors.

All events will be judged by ITLA approved judges. The uniqueness of Texas Longhorn cattle with their many points of special identity demands judges who have owned, buy, sell and regularly involve themselves with the industry. They are not a generic breed that just anyone can judge accurately.

After the Championship Kookachex and Iron On will return home to DCC of Ohio. The Dickinson family has been breeding superior Texas Longhorns for 53 years. Tours are conducted for the public of DCC during the Summer months for thousands of guests. See these two great national Champion cows and their familys on a ranch-pasture tour, by appointment.