Crops were harvested at a slower pace due to higher amounts of precipitation last week, according to Cheryl Turner, State Statistician, USDA NASS, Ohio Field Office. Topsoil moisture conditions were rated 84% adequate to surplus by week’s end, up 29 percentage points from the previous week. Approximately 28% of the State was abnormally dry or worse, according to the most recent Drought Monitor, compared to 56% the previous week. Average temperatures for the week were 5.1 degrees above historical normals and the entire State averaged 1.84 inches of precipitation. There were 2.8 days suitable for fieldwork during the week ending Oct. 25.

Soybeans dropping leaves reached 100%, ahead of the five-year average by 2 percentage points. Soybeans harvested was at 73% while soybeans moisture content was at 13%. Corn mature was at 93%, one percentage point behind the five-year average, while corn moisture content was rated 22%. Alfalfa hay fourth cutting was at 92%, ahead of last year by 1 percentage point. Other hay third cutting was at 94%. Half of corn was rated good to excellent condition compared to 36% the previous year and 33% of pasture and range was rated good to excellent condition. 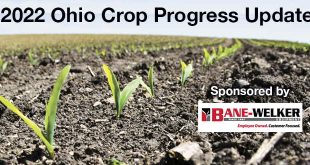