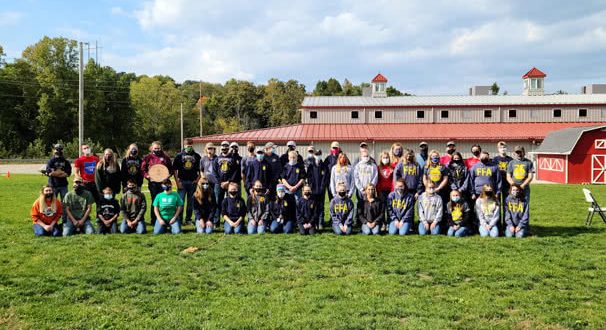 On Thursday, October 1st,  West Holmes FFA members attended a community service event at Harvest Ridge in the expo center to carve pumpkins for the 2nd annual Harvest Glow event that is held at the Fairgrounds. Members carved from 3-7 and were thanked with a meal by Exclusively Yours Catering. On Saturday, October 3rd, The West Holmes FFA Chapter held their 2nd annual Ag Olympics at the Harvest Ridge fairgrounds. They were joined by the Triway and Smithville FFA chapters. Members competed in different games which included an obstacle course, tug of war, sack race, pumpkin bowling, egg toss, pie eating, milk the cow, and bale toss. The Smithville members were named the winners and received the rotating trophy and $300 for their chapter provided by the Harvest Glow Committee.  Thanks to all of the members who participated in pumpkin carving and the Ag Olympics!