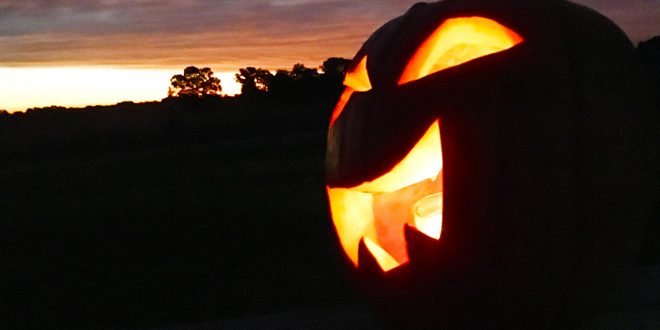 Don’t get scared by this terrifying scene on the front porch of the Reese house. It is not nearly as unsettling as the rest of 2020.

It is hard to imagine that Halloween could be any spookier than any of the rest of 2020, but with the holiday falling on a Saturday and a full moon (a rare second-in-the-month full blue moon in fact) this year, anything is possible.

Halloween candy sales have been trending up, but costume sales have dramatically tumbled. I guess there is no need to buy a mask when you are already wearing one.

It seems though, costumed or not, Ohioans are in the mood to get out and enjoy rural Ohio as there is clear interest in visiting Ohio’s agritourism farms this fall where any number of autumn products can be found and purchased. See the related story on page  . The year has brought tremendous uncertainly and many required changes for some operations, but business is booming as people just want to go outside and do something in rural Ohio. With autumn staples such as the Circleville Pumpkin Show not happening this year, agritourism efforts are helping to fill the niche as consumers continue to search out ways to make the most of 2020. No doubt pumpkin carving will be on the list for many families this month as All Hallows’ Eve draws near.

On a day with no shortage of giant, haunting pumpkins just around the corner, many people may be wondering just how the largest, most terrifying of these autumn staples come to be. The dry conditions experienced in much of the state in 2020 tended to be good for disease mitigation, though some powdery mildew problems did show up around the state. Irrigation was important, however, to get large pumpkins with the limited rainfall. All in all, 2020 seemed to be a generally good year for growing large, high quality pumpkins in Ohio.

Even first-time growers are capable of growing pumpkins in excess of 400 pounds with Atlantic Giant variety seeds, which are available at numerous garden centers and catalogs, according to Mike Estadt, educator, Ohio State University Extension.

“To grow pumpkins in excess of half a ton, it all begins with superior genetics,” Estadt wrote in Growing Giant Pumpkins in the Home Garden, an Ohioline fact sheet that was released in 2019. Ohioline is OSU Extension’s free online information resource and can be found at ohioline.osu.edu.

Generally speaking, some of the other things to consider when growing big pumpkins, Estadt said, include the following.

• Site selection and planting: Each pumpkin plant should be allowed 1,000 square feet of growing space in an area that has several hours of daily sunlight and access to water, considering that pumpkins require large amounts of water.

• Fertilizer and lime: When planting, you’ll need to have the soil tested to determine whether lime and fertilizers are needed based on your soil requirements.

• Planting and space requirements: The pumpkin seeds should be planted individually in 12-inch peat pots indoors in April and can be transferred to the ground when the first true leaf is fully expanded, typically 10–14 days after seeding. Once planted outside, they can be protected from frost using row covers, or a small greenhouse.

• Irrigation: Pumpkins have shallow roots, so they will need to be watered slowly with at least 1 inch of water per week if the area doesn’t experience an adequate amount of rainfall.

• Insects and diseases: An insect and disease control program should be initiated when you transplant the pumpkin plants from the pots to the ground. This is because once a bacterial or viral infection has occurred, there is no way to stop it. And several pests are attracted to pumpkins, including striped cucumber beetles, squash bugs, and squash vie borer.

• Shade: Once the pumpkins get to a certain size, they need to be protected from direct sunlight. For example, you can use a bedsheet draped over the pumpkin, leaving the stem exposed.

Ohio is typically among the top producing states of the large, carving type of pumpkins, usually ranking between third or fourth among states for pumpkin production, according to the Ohio Department of Agriculture, with more that 66 million pounds of pumpkin produced statewide in 2018. And, from a nutritional standpoint, pumpkins are low in calories, are full of potassium and antioxidants, and the seeds make for nutritious snacks. I sincerely hope no matter what type of farming operation you have, there are beautiful autumn days aplenty, the harvest is safe and bountiful, and the bulk of the spookiness of 2020 is well behind us, even as Oct. 31 draws near.