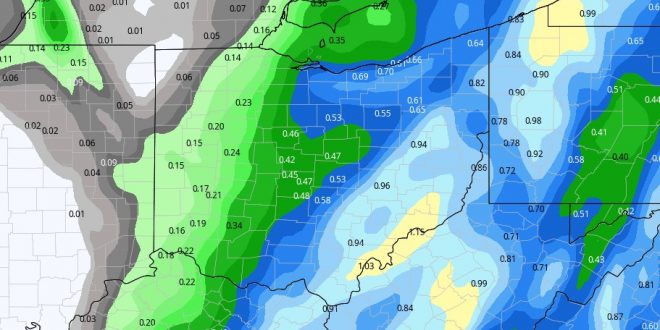 Rain moves over Ohio today, as a frontal complex works through. But we could be talking about our first significant snow potential coming for early next week! Temps will be warmer today than yesterday and should stay relatively mild through the end of the week. Rain totals will be from .25″-1″ today with coverage at 100% of Ohio. By sunrise tomorrow morning, we see moisture gone in many areas, but lingering showers over the eastern third of Ohio. Those showers should dissipate by midday. The balance of Thanksgiving will be mostly cloudy, although we are keeping fingers crossed for some sun to break through in the afternoon, especially in western and NW Ohio.

Partly to mostly sunny skies will be here for Friday and Saturday, as dry weather continues. We should see temps normal to above normal in most areas with good evaporation rates. Sunday starts with sun, but clouds develop midday and afternoon ahead of our next weather system.

That storm complex lifts up from the SW overnight Sunday night and Monday, bringing rain back to the region. We we can see .25″-1.25″ rain totals over 100% of Ohio. But we also start to turn much colder Monday midday and afternoon, while precipitation remains nearby. That gives the potential for rain to change over to wet snow, at least over the northern half to third of Ohio. Temps will be dramatically colder for the first half of next week, some of the coldest of the season so far. Wrap around moisture circulates through Ohio as well, meaning we see lingering light snow and flurries for Tuesday and Wednesday. While coverage of that snow potential is 60%, the bulk of concern about accumulations will be far northern areas, where lake enhancement of precipitation is expected. The map below shows rain potential from the system Sunday night through early Monday afternoon. We are not posting any snow maps just yet because it is too early to step out with totals for the event. However, early data suggests somewhere in the eastern corn belt could be looking at significant accumulations…likely just a bit farther west in Indiana and up into MI. We will say we are watching for Monday afternoon-Wednesday snows to at least be a few inches over 605% of the state stay tuned.

The rest of the 10 day window is partly sunny, chilly and dry for next Thursday, Friday and Saturday. There can be another front arriving possibly next Sunday, December 6th.