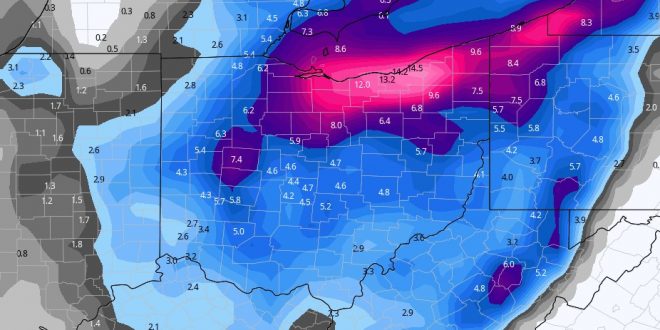 Our first winter storm of the season hits Ohio today and tomorrow. When we were talking about this storm complex last week, we told you the track of the low would ultimately be the key to who gets a major event and who doesn’t. The low has taken a more easterly track, and as such has put all of Ohio in the cross hairs.

Low pressure will be moving from east TN through central WV and into central PA on its track today and tomorrow. This puts the heaviest snow potential in over Ohio. Precipitation starting early Monday morning will continue through the day and will then linger tomorrow (Tuesday) on strong wrap around circulation. Dropping temps get fully into the zone needed for snow development for the next 48 hours and we will see some good accumulations. Even on Wednesday we see NW flow keeping flurries in our forecast. Strong NW winds developing this afternoon and tomorrow will crank up lake effect snow potential too out of this event. We are projecting snow totals through Wednesday morning at 2-10 inches in non lake effect areas and higher totals potentially in north central to NE OH where the lake really influences and sees traditional lake effect dumpings. The map below shows geographical spread of the snow potential . A large part of the state is in the 2-8 inch range, and the higher totals are skewed somewhat north and east. We wont truly be able to say we are done with snow and this event in all areas until sometime Wednesday afternoon, although south and west areas should see only flurries tomorrow and early Wednesday.

Behind the system, we actually are going drier. Two more strong systems like this one will be headed on similar tracks, but each one is staggered a bit farther east, and will not impact Ohio. So, we are chilly through midweek, then seem better sunshine potential and moderating temps Thursday and Friday. A brief cool-down on Saturday will be followed by sun and milder temps again for Sunday.

Next week starts much colder again with a resurging Canadian airmass taking control of Ohio. We see clouds and limited sun, but are not concerned about precipitation at the moment for next week. We should be just chilly but dry for next Monday through Wednesday.

So, after a very active and stormy start to our forecast the next 3 days, we follow it up with much more calm and seasonal weather as we move toward mid-December.