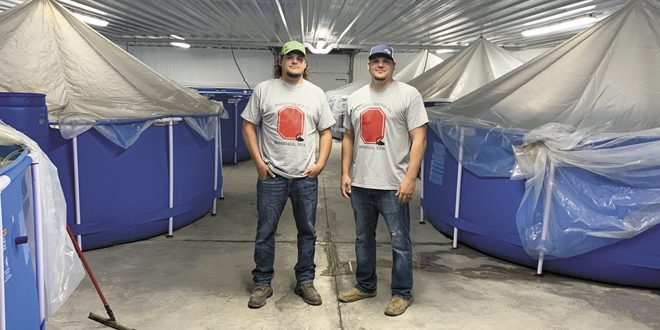 Brothers TJ and Jack Waldock added aquaculture to their Wood County vegetable operation, raising tilapia and shrimp in this temperature controlled facility. The hoods on the pools keep the shrimp from jumping out of the pool.

It’s uncommon to find local Ohio seafood, but the Waldock brothers have found a way to produce seafood locally nearly 600 miles from the closest ocean.

Buckeye Seafood Company in Wood County produces fresh shrimp and tilapia for retail. The aquaculture operation was added to diversify the family’s 300-acre vegetable production operation in Wood County by brothers Jack and TJ Waldock, who share a lifelong love of fish and seafood.

“We’ve loved fishing forever,” Jack Waldock said. “We always wanted to do aquaculture. When we were younger, we wanted to do tilapia but there was a heavy start up price. Our dad steered us that way and when we were in high school we went and toured a tilapia and perch facility. We were always looking for something different to do and shrimp came up. After years of planning, we pulled the trigger and got started. We added the building 2 years ago and it has taken off ever since. So far so good.”

Recreating the marine habitat for finicky fish is no easy task.

“Saltwater is a different animal. With the saltwater you have to test the water a couple of times a day,” Jack said. “You’re feeding constantly too, which is like any other livestock. In that regard it is very similar. You’re taking something small and getting it up to market size. The only difference is you’re doing it completely inside in a temperature controlled environment and saltwater.”

Tilapia are typically meant to become acclimated to saltwater slowly, but the Waldocks found that they can place the tilapia immediately in a saltwater pool and have no issues. The tilapia are shipped from Tennessee through the mail in a bag of 200 baby fish. They now raise tilapia in four shuttles each containing 200 to 600 tilapia.

“With tilapia we just plug them in there and let them eat,” Jack said.

Shrimp production requires the most attention and has proven to be more challenging. The shrimp come weighing a gram and a half, as babies, on a truck from RDM Shrimp out of Fowler, Ind. From there they have to be fed four times a day, and thrive in 80 to 84 degree salt water. The building that houses the shrimp is heavily insulated and uses a boiler that packs heat from floor to ceiling to ensure a warm climate at all times. There are eight pools that have warm oxygen pumped into them, which creates a current for the shrimp and tilapia.

“We have been tinkering with the shimp population in each pool. We have tried everything from 4,000 to 8,000 in a pool. So far we have found that the heavier we stock them the more luck we have. It might take a little longer to get to market size but we think in the end there will be more pounds per pool,” TJ said. “We take pond water and load the pools up with saltwater for the shrimp. We add the perfect amount of salt that the shrimp thrive in. Some say saltier is better and we have been tinkering with that.”

When it comes to the water temperature, salt levels and pH, the shrimp get picky.

“If you get in a low 80 degrees, things start to get finicky and you start to lose a good percentage of the shrimp,” TJ said.  “They are not a hardy species I guess I’d say. We test the water pretty diligently. We try to keep a record everyday of it. We use the oxygen meter and try to memorize the levels we like to be at.”

The Waldocks have learned some lessons the hard way.

“We tried to get it cheap and use pool salt — that lasted about two days and they were all dead. That was about 4,000 shrimp lost,” Jack said. “So let’s say the alkalinity drops. You know something went wrong in that pool probably, and the only way to fix it is baking soda.”

The levels of beneficial bacteria are also very important for the shimp and take time to build. The bacteria in the pool helps stimulate the environment the shrimp would typically thrive in. To maintain better bacteria levels, the water is never drained from the pools housing the fish and shrimp.

“After the last couple of pools, we have been pumping some of the sludge from the other pools into the bottom to build bacteria and increase survival rates,” TJ said. “So far that has been pretty successful. You don’t want to cut corners. We are not dealing with the hardiest animal in the world. Shrimp are very finicky about salt level water temperature oxygen level, but if you put the time in and do it right it seems like you can get a good outcome.”

As bacteria levels increase, so does overall survival rate and rate of gain.

“The more cycles you get through this pool, your survivability is going to go all the way up to 90%,” Jack said.

The feed the fish and shrimp eat is not much different than the type of feed used for general livestock more common in Ohio: a fishmeal, soy and corn meal blend. The shrimp are fed aggressively until they reach around 20 grams. Then they are sold retail by the pound.

“We could do a 20 count per pound of shrimp and that would be a good size — better than a grocery store. So that’s kind of how we are trying to distinguish ourselves, by having bigger shrimp,” TJ said. “These shrimp are bigger and sweeter than most store-bought shrimp. We had one person tell us they tasted almost like lobster.”

As they have gotten more efficient at raising shimp, there has not been trouble finding local demand. The shrimp are sold on ice, cash only.

“It has not been a challenge to get rid of anything. If it keeps going this way we’d like to expand some and do wholesale eventually and make it easier on ourselves. But right now it is all retail and it has gone really well,” TJ said. “It excites people to see these kinds of products around here.”

“We may add a lean-to on our building and add another facility. We may add different kinds of crabs — like blue crabs — to add diversity and see how far we can take it,” Jack said. “We didn’t go to school to be marine biologists so I probably learn something new every day.”

Both brothers admit that aquaculture is not for everyone, and getting the business started is a risk and a significant investment.

“With the start-up cost, you are taking a risk. We’ve been fortunate enough to not have to spend too much on marketing yet,” Jack said. “There has been a steep learning curve that’s for sure.”

Part of that learning curve has included preparing the shrimp for sale based on specific consumer demand — a unique skill set for their northwest Ohio community. Some people like the shrimp to be headless, and others prefer the shrimp heads to be intact to make a dish called “shrimp head soup.”

“We have to rip their head off, then we have to de-shell them, and when we take the heads off it deveins them,” TJ said, though he prefers to leave the heads on.

Jack claims he is the fastest shrimp peeler around.

“I can peel about 20 shrimp in a minute probably,” he said.

Fast peeling is required to keep up with the rapid pace of sales. Buckeye Seafood Company recently sold two pools of shrimp in just two days. The Waldocks clearly enjoy what they are doing, and they love eating the products of their labor.

“We love seafood probably more than anything, I could eat it with just about anything. And when you buy shrimp, you only have to cook them for about two minutes,” Jack said. “I love making seafood gumbo. My grandpma makes a shrimp creaole with rice, bell peppers, onions and cooks it all in a pan, or we’ll grill it with butter in a foil pack. Either way, it is pretty good.”