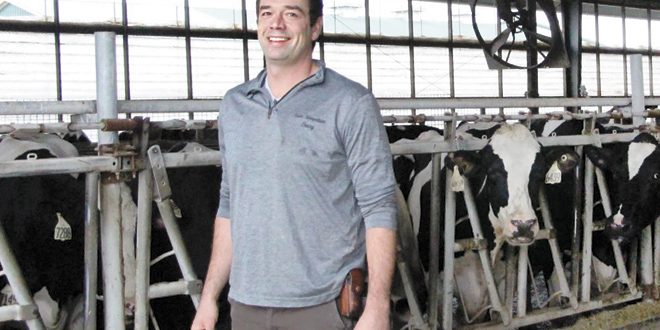 Ted Sonnenberg, of Sun Mountain Dairy in Henry County, has been breeding Beef on Dairy for the past two and a half years.

Beef on Dairy a growing trend

There are roughly 10 million dairy (breed) milk cows in the U.S. Dairy Herd. The bull calves born from this dairy herd make-up a significant portion of the animals slaughtered for beef each year. Over the last several years, the idea of breeding dairy breed cows with beef breed bulls has gained momentum, and is known as “Beef on Dairy.”

To serve their members, and address this growing industry trend, United Producers, Inc. (UPI) has announced the hiring of Clay Fredericks to join their team as Beef on Dairy Manager. Fredericks was raised on a dairy farm in New York, and most recently worked as the Beef on Dairy coordinator for ST Genetics in Texas. In his new role, Fredericks will oversee Beef on Dairy initiatives, creating new opportunities for dairies, growers and end users. He will be working on data management, logistical coordination, and relationship building to create new opportunities for UPI members.

“This will change the beef world,” Tom said. “At the end of the day, 50% of the genetics of a dairy cross bull calf raised for beef is a known entity.” Genetic selection and record keeping helped build the dairy industry to where it is today, and that dairy side of the Beef on Dairy cross is known. “Knowing the other 50% predictability is the next task,” Tom said. “We are now getting closer to the other 50% being predictable as well.”

In the past, dairy farmers were looking for an inexpensive way to have a beef-dairy cross, in hopes of raising the value of the dairy bull calves they sold. Typically, the dairy farmer was not concerned with keeping records of the beef genetics used. At the same time, the genetic companies were able to sell less expensive semen but were also not as concerned with the predictability when it was bred to dairy cows.

“That is all changing dramatically,” Tom said. “As an organization that markets food and markets beef, it is exciting to be able to go to a client with that level of predictability in a known entity that we are providing to them. This is exciting and is going to change the beef industry.”

In an effort to provide leadership to the industry, Fredericks has been working to brand and develop UPI’s role in this market and determine where, and at what level, the organization wants to be involved. “I have been doing a lot of fact finding, and combining that with the knowledge from my past experience in the genetics industry,” Fredericks said. “We are working to use the known genetics to increase the predictability and create a value-added program, and then take that initiative to help producers connect further down the line. We want to help them plan and breed for tomorrow’s future with predictability and consistency.”

“The industry marketers have created a box demand that the Holstein cross beef cattle products fit well,” Tom said. “Beef on Dairy feed out very similar to their all-beef counterparts, and fit the demand that marketers are looking for.”

Predictability and consistency are the keys to making this initiative a success in terms of market acceptance, and greater profitability. Buyers do not like uncertainty. In the past, the packers often did not have the consistent predictability to know how an animal would grade out, and so the price offered at the market reflected that uncertainty. As packer confidence in the predictability of the Beef on Dairy animals increases, the thought is that the price offered will reflect that.

When selecting beef bulls to breed to dairy animals, there are differences.

“Angus bulls are the most prominent currently used in a Beef on Dairy cross, and the black hide fits the market perceptions,” Fredericks said. “In different parts of the country, different beef breeds will be used. The majority of those used in this part of the country will be Angus or Semimetal-Angus bulls. That fits well with where UPI is positioned. Further west and in the northwest, Charolais and Limousine bulls will be more common. There are marketable options for everything.”

UPI has the ability to connect producers to cattle feeders.

“The Cattle feeders are looking for some level of knowledge of the animals they are purchasing from the dairy farms,” Fredericks said. “Vaccination protocols, colostrum management, animal welfare, and genetic predictability are all important. UPI can work with both groups to create a ‘pull-through’ demand for the Beef on Dairy animals.”

Responding to the demand for Beef on Dairy is nothing new for dairy farmers. Ted Sonnenberg, of Sun Mountain Dairy in Henry County, has been breeding Beef on Dairy for the past two and a half years.

“We saw a market opportunity to receive a better price for our bull calves,” Sonnenberg said. “The Angus crossed with the Holstein produces a calf that grows well, and in our experience has an excellent feed conversion. They seem to be able to tolerate stress and once they get started, they are all but bulletproof.”

Sonnenberg agreed that up to this point, not a lot of emphasis has been placed on the genetics of the bulls used.

“The Angus brand has value in the marketplace. When it comes to the Beef on Dairy market, adding consistent predictability that comes with known genetics makes a lot of sense,” he said.

Ultimately, Beef on Dairy still have plenty of potential for growth.

“At the end of the day, logistics are going to be a key to the success,” Tom said. “Success is going to depend on getting the right product with the correct data from point A to point B and then from point B to point C. We are going to need to work with the genetics companies to provide the data, and a comfort level to the feeders, that cattle have the predictability that they are going to perform to a certain level.”