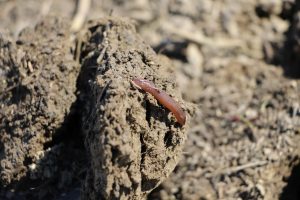 Lessons from the past to grow the future

Those who do not learn from history are destined to repeat it.  This was the message from Hans Kok to farmers, as he spoke at the 2020 Ohio No-till Council Winter Conference. “Understanding the history of our soils in Ohio and Indiana, and what has been done to them over the last century helps to explain some of the environmental issues we see today, and can lead to possible solutions,” said Hans Kok, Program Director of the Conservation Technology Information Center.

“The Ice Ages did a major job on Ohio, Indiana, and the surrounding states. The ice came down from Canada. It was up to a mile thick, and it basically bulldozed our entire landscape off. Everything we had was bulldozed to the bottom. The hills in southern Ohio and Indiana are basically what our soils used to be in the northern part of the state,” Kok said. “We started with no soil when all that ice melted. It has been warming ever since that ice melted, and we are still going through that. At first, we had very heavy compacted soils, which were glacial till. Very slowly vegetation began to grow on those soils, and over time we got the soils and vegetation we had before we started farming here.”

The soil quality issues that farmers face today did not happen over night. “It took thousands of years to rebuild our soils after the ice ages, but in just a few decades due to drought and erosion, we destroyed many of those soils,” Kok said. “When the settlers came to this area from Europe, they brought with them their knowledge and technology with farming practices that worked where they came from. The issue is that this area was a different environment from what they were used to, and the soils were different. What worked in Europe did not work the same in this new environment, and in part is what led to the Dust Bowl in the United States.”

As a result of the Dust Bowl and other issues in the 1930s, the Soil Conservation Service was formed.

“We know a lot about soil physics and chemistry, but the biology of the soils is something we still don’t know a lot about. Data from the University of Illinois shows that on plots dating back to 1873, we have lost about 80% of the organic matter in the soils that have been farmed continuously since that time.

There are some key steps that NRCS promotes, in an effort to returning the soil to earlier productivity levels.

“Minimizing soil disturbance is the first step,” Kok said. “This includes reducing the tillage performed, or using no-till. The second step is maximizing cover. This includes keeping residues on top of the soil, and using cover crops. The third step is maximizing plant diversity and providing continuous living roots. This would include planting cover crops between every commercial crop we grow.”

Over time, the new knowledge gained has led researchers to understand the importance of having a growing crop in the soil as often as possible. “What we have been doing for the last century has been to grow corn and soybeans, and only use the land for about five months out of the year, and the rest of the time it is barren,” Kok said. “When I went to school, I was told that the soil needs to rest between those crops, and that turns out to be absolutely wrong. Soil never rests. Soil is always living. You cannot turn it off. All that soil biology needs to be fed over the winter and taken care of. If we only grow crops for five months, mother nature sends us a signal that she doesn’t like that because she tries to get weeds to grow. By raising cover crops we can double the amount of time we have something growing in our fields and feeding the soil biology.”