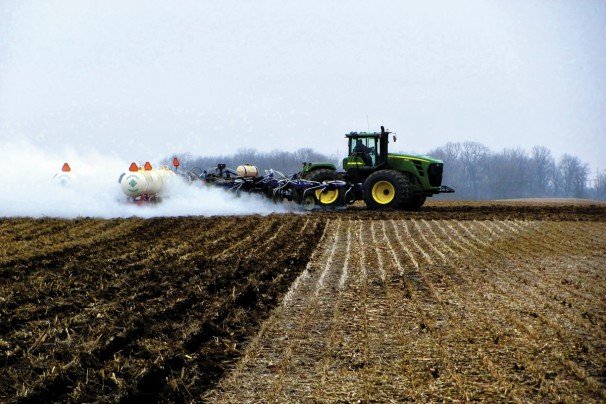 Let’s talk again about nitrogen management. It leaks, like everywhere. Up and down — up as a gas when the soils are saturated and down and out with rainfall. Even though 80% of the atmosphere is N, we still have to supply it for our grass crops. And we add more than we need, because we don’t want to be short. If you wonder why I bring this up again, it’s because the survey says — you aren’t listening.

So what can we do about managing nitrogen for corn? The current tool to make nitrogen recommendations for corn in Ohio is the CNRC. This stands for Corn Nitrogen Rate Calculator — based on a model to give the Maximum Return To Nitrogen (MRTN). The tool is housed at Iowa State University and includes our Ohio data in the model for our Ohio recommendation. The calculator site also houses recommendations for the neighboring states of Indiana and Michigan — with a total of seven states involved in developing the model. We now have 280 Ohio trials in the model to assist with getting to that best economic rate. The rate is set by inputting your N and corn price.

How do you determine your N rate for your crop? The old rule of thumb for many was 1.2 pounds of N for every bushel of your yield goal.

Why don’t we throw in a factor for the site and weather? That is somewhat covered by selecting Ohio as the state — that will get you to our soils, rainfall, and growing conditions. But also because we don’t have enough information from the past to calculate the future, so that means you may have to look for a way to incorporate “this” growing season into a nitrogen rate calculation.

Do try out the Corn Nitrogen Rate Calculator on you own, with your prices: http://go.osu.edu/corn-n-rate or http://cnrc.agron.iastate.edu — both go to the same place. And perhaps think about how to most economically use your nitrogen.

How reliable is the MRTN Model in the Corn Nitrogen Rate Calculator?

Researchers have evaluated many models to predict nitrogen need in corn over the years. One group recently made a comparison of 31 corn nitrogen recommendation tools used across the Midwest. Ransom et al., reported in the Agronomy Journal 2020;1-23, that while there are some drawbacks to the MRTN model, it was similar to the best tools evaluated. It was one of the top-performing tools both for at-plant and split applications but tended to overestimate nitrogen needs by 14 to 17 pounds of N per acre. The authors went on to suggest that further improvements to the MRTN model could be made by adjusting the rate based on in-season weather and soil conditions.

How do we balance the need for profitable production vs. concerns for the environment?

Newell Kitchen, USDA-ARS Soil Scientist at the University of Missouri in Columbia, made several remarks at the recent American Society of Agronomy annual meeting this past November. He spoke in the session, “A new approach for balancing economic and environmental outcomes for crop nitrogen fertilization” regarding nitrogen use efficiency (NUE); he suggested it is only about 30 to 40% meaning we apply about twice as much nitrogen fertilizer as we remove in grain. On the use of the MRTN model for setting nitrogen rates, he suggested we should set rates a bit below the economic optimum for environmental benefit. This would improve the NUE, and reduce N losses to the environment. But that would come at a cost: his suggestion was that farmers would be paid an incentive payment to offset the yield reduction. What would that look like?

If we based the recommendation on Newell Kitchen’s suggestion to set an “environmental” rate a bit less than the economic rate:

• In this case I moved just down the Net Return to N curve to set a bar for the “environmental” rate.

The illustration here is a misapplication of the CNRC tool, but hopefully it gives the grower and the crop adviser something to think about when you plan your nitrogen applications. This also provides some fodder for conversations in the legislature and within environmental groups on how to provide compensation to those growers who do embrace the concept of an “environmental” rate vs. the “economic” rate.

How do you adjust that MRTN rate by location?

Jason Clark at South Dakota State University made the following observations in a recent article in the September-October 2020 issue of Crops and Soils Magazine, to further point out weather and soil differences. Jason summarized data from the 49 studies across the eight Corn Belt states, comparing yield and expected N losses. He determined that soil texture and rainfall had the greatest impact on yield and N loss when comparing split nitrogen applications to a single at-plant nitrogen application.

His observations on yield across soil types were:

As to his remarks on nitrogen losses:

By Madi Kregel, OCJ field reporter               The last year certainly made life challenging for anyone …