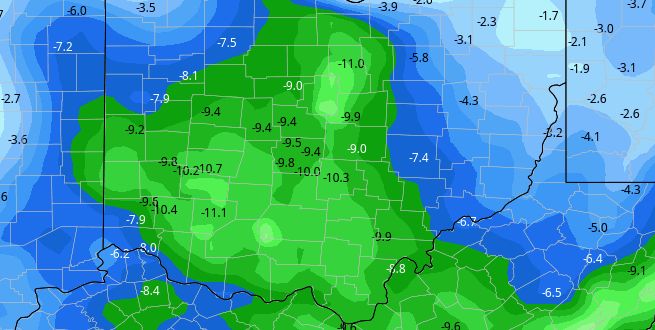 Drier weather settles in over for most of the upcoming 10 day period. Our only precipitation hiccup will come tomorrow, and otherwise the biggest talking point of the forecast will be temps swings and cold air.

Mostly sunny skies in here today, which will help with temps a bit. While we are not expecting a huge surge to above normal levels, we should end up better than yesterday.

Overnight tonight, the remains of a winter storm that hit KS and OK yesterday will push into and through the TN Valley before turning slightly northeast tomorrow. That will bring the potential for some clouds into far southern OH. At this point, we are not concerned about precipitation, just clouds. However, tomorrow we also have a fast moving little wave coming across the Great Lakes, This system does not look to move as far south as we were concerned about earlier this week, but there still can be some clouds around and the combination of the two mean we wont rule out a bit of light precipitation Friday midday/early afternoon somewhere in eastern OH. However, coverage is spotty to isolated at best, and generally, we are more concerned about clouds than anything else for Friday. Much colder air will be following that northern wave, so look for a chilly finish to the day tomorrow.

The weekend turns out partly to mostly sunny, but chilly. Temps are not expected to be too far below normal, but will be cold. That airmass remains in control for the start of next week too. Temps yo-yo a bit the rest of next week, but generally, after the cool start to the week, we see temps climb to above normal levels by late in the week. The map below shows temps Sunday (top) and next Thursday(bottom) compared to normal. Notice the big change.

The extended 11-16 day period starts dry as well, following through on the dryness in the 10 day period. In fact, we may not see any significant threat of precipitation until closer to the 19th or 20th, as there is not much atmospheric moisture to work with and strong fronts remain sparse.