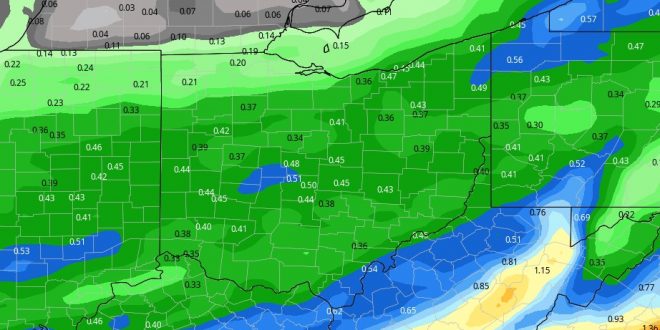 The forecast goes fully dry for over a week after today. Honestly, event today is “mostly” dry, but we wont rule out a bit of moisture in far south and southeast parts of the state.

Today the remains of a winter storm that caused things to grind to a halt in OK and KS Wednesday night and yesterday will pass by to our south. This will put showers in over KY, TN and the rest of the deep south, but can also throw a few clouds into southern OH. We think these clouds will mostly be limited to areas from I-70 south. Precipitation is not a big expectation, but we would not be surprised if a few scattered showers tried to stray over the OH river into some southeast OH counties. Amounts would be minor. Farther north today, we see a mix of clouds and sun. The northern trough feature we had been talking about earlier this week is looking to stay north, so no precipitation threat from that. However, that trough moving through will bring a reinforcing shot of cold air into the state for the weekend.

We turn out partly to mostly sunny and chilly for Saturday and Sunday, but will be dry. Same story for next week, with generally sun and clouds. We start cold Monday, but temps moderate by midweek. Late in the week we can see another slow sagging push of cold air, but that likely does not impact us until closer to Saturday. We expect no precipitation and good evaporation all week, with generally seasonal temperatures.

Our next front arrives later next Sunday, a cold front system coming in from the west. South flow ahead of that front means we see rain to start, but will not be surprised to see a change over and ending of wet snow. Moisture totals are not that impressive, at a few hundredths to at most half an inch, but it is basically the only threat of moisture we see in the next 10 days. The map below shows moisture totals (liquid equivalent) for the entire 10 day window from this morning through next Sunday and practically all of this comes next Sunday.

The extended 11-16 day period does not look too active right away, but a strong winter storm is possible as we get closer to the 18th and 19th. Some models are way overdone on this system so far, so do not buy into the hype, but by the same token, it could be our next round of snow of any significance.