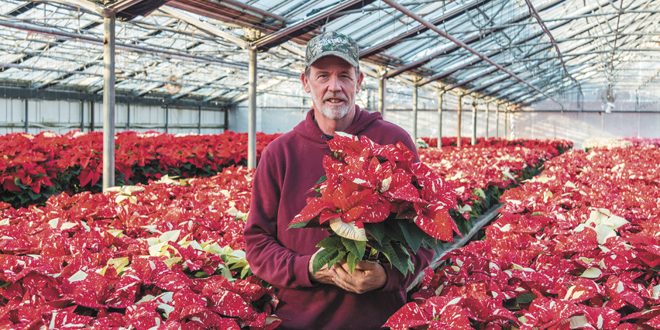 Paul Barco is the production manager for Barco Sons Inc., an is the third generation of his family to grow flowers in northeastern Ohio.

Poinsettias in bloom are a sure sign Christmas is coming at Barco Sons, Inc.

For Paul Barco, it’s not the evergreen tree that signals the turn of the holiday season. Instead, it’s the radiant color of a poinsettia. Paul, the production manager for Barco Son, Inc. is the third generation of his family to grow flowers in the northeastern Ohio region.

Located in Medina, Ohio, Barco Sons Inc. grows a variety of plants in 260,000 square feet of greenhouses. The greenhouse was originally founded in Rocky River, Ohio in the 1940s when Paul’s grandfather, John, began growing vegetables to sell at farmers’ markets in Cleveland. John’s three sons would prove to have a green thumb as well, and it was Paul’s father, Arthur, who took an interest in flowers.

“Dad decided he wanted to get into cut flowers. He and his two brothers, Willard and David, incorporated their business in 1965. At that time they had around 60,000 square feet,” Barco said. “Half the greenhouse would be for growing chrysanthemums and the other half for carnations.”

After spending his whole life around plants, Barco attended Ohio State ATI and earned a degree in horticultural sciences before beginning his career in the floral industry in California. However, family ties would eventually bring him back home.

“I just enjoyed helping my dad,” Barco said. “Working with family is all I have ever known.”

While the last crop of cut flowers was harvested in 1986, the greenhouses still remain full and busy. Throughout the year, the greenhouses will rotate all sorts of flowers such as lilies, begonias, hydrangeas, bedding plants and more; but in late fall and early winter, it’s hard to miss the bright pops of color from the poinsettias.

“We start planting poinsettias around July 1,” Barco said. “We plant our bigger ones earlier and then plant our smaller potted ones later on in the year. We offer them in 4.5-inch pots up to 10-inch pots.”

“There have been times in the past when we planted 100,000 poinsettias. But it’s just like anything, you have to match supply and demand,” Barco said. “There used to be a lot of interior plant-scaping companies that would decorate malls and shopping centers, but there’s less and less of them these days. We also decided to downsize our planting this year by about 20% due to COVID-19.”

Because planting decisions are made in the spring, when rooted cuttings are ordered in, 2020 was looking like a bleak year to sell wholesale flowers. Almost half of their Easter crop was left unsold.

“Right when we would normally sell our Easter flowers and plants, everything got shut down. I was getting order cancellations left and right,” Barco said. “A lot of our materials go to churches to decorate with and obviously those got shut down so they didn’t need flowers anymore. So in April and May, thinking ahead to Christmas time, we didn’t know what to do.”

Luckily, sales are proving to be strong.

“I should sell out my poinsettias,” Barco said. “I honestly could’ve used a few more.”

Most of Barco Sons Inc. business is within a 100-mile radius. They sell their poinsettias to garden centers, interior plant-scaping companies, florists and small stores.

“Our customer base is very diverse. Most of our marketing is done by word of mouth, but we do call on customers often,” Barco said. “Our poinsettias begin selling around the first of November and we will deliver them through Christmas.”

This year, they will be offering their customers 13 varieties of poinsettias, most of which are red, but some have color variations.

“We have about seven or eight different varieties of red poinsettias, they all kind of bloom at different times throughout the season,” Barco said. “But of course then we have some that are white, some that are pink and some that are marbled with a combination of colors. My personal favorite variety is called Jingle Bell, it’s red with a blaze of white.”

Other non-traditional types of poinsettia that have proven to be popular are painted poinsettias.

“Every year I will paint poinsettias different colors. I start with a white plant and use special paint. I’ve done blue, orange, purple, fall colors — stuff like that. Everybody buys them and loves them,” Barco said. “I paint and sell a couple thousand every year. I will also spray some with glue and add glitter to them too.”

While Barco says that poinsettias are not the most difficult plant to grow, they can be challenging because timing is everything.

“It’s a long crop to grow, especially when you start with a rooted cutting in the summer and don’t sell them until November and December,” he said.

When poinsettias begin to grow, the colorful parts they are most known for are actually not flowers. They are a collection of leaves, called bracts. The flower is the yellow part that is in the center of a bract. To control the number of bracts, poinsettias must be pinched during the growing season. This is usually done a few weeks after potting.

“Pinching off the stem allows the plants to have lateral growth of the clusters,” Barco said. “If we didn’t pinch off the stem, they would continue to grow vertically, like a tree.”

Another thing that makes poinsettias unique is that they are both a full sun and a short-day plant. They are a tropical type plant that enjoys warmth and sun.

“Poinsettias do best in full sun. But they only will bloom when the days get shorter, so in the fall usually in September and October you’ll see them start to develop their color,” Barco said. “We have a blackout curtain we use on some varieties to get them to bloom a little earlier to hit that early November market.”

The weather this year proved to be a bit of a challenge, as the fall temperatures stayed warm and the sun brought them into maturity sooner than usual. Poinsettias will also naturally bloom by themselves in the winter, as the daylight hours shorten and it’s darker for longer.

“It’s possible to keep poinsettias and to make them bloom again later in the year, but a lot of times people will have too much light on them,” Barco said. “Even just a night light or a kitchen light can be too much and prevent them from blooming. It can be done, but it’s hard.”

Just like other crops, pests can be a problem as well.

“There’s always insect problems you have to be aware of,” Barco said.

The most common insect that affects poinsettias is the whitefly.

“We just have to look out for those and for another insect called thrips,” he said. “Usually an insecticide helps prevent them.”

While many people enjoy the bright flower in their homes during the holiday season, many are unaware of the time and devotion it takes to bring the flowers to their tables.

“Growing poinsettias is kind of like having cows,” Barco said with a laugh. “You have to watch them all the time, take care of them all the time and it’s seven days a week. The only difference is you’re not milking them.” 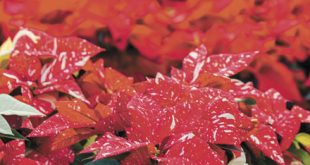 Keeping poinsettias through the winter