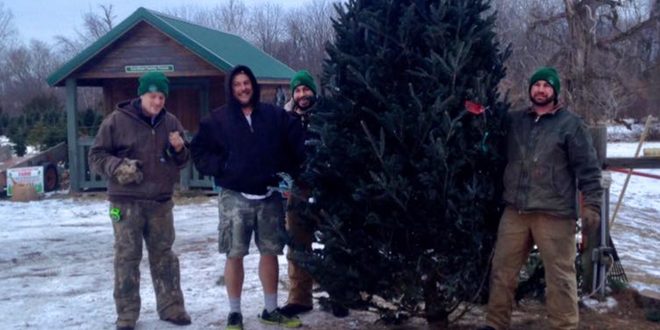 My brother Aaron, the man in the rusted van, my brother Jeff and I a few years ago on the tree farm in Hancock County — notice the shorts in the snow.

The thin layer of fresh snow crunched under the tires of the old, rusted van that pulled into the gravel parking spot between a gleaming new SUV and a big pickup truck. A lone man got out of the dilapidated van with a creak of the door and a plume of cigarette smoke. He had long hair in the back, short hair in the front, and wore only a sweatshirt with cut-off sleeves and some ragged, grease-smeared jeans.

He definitely didn’t fit the mold of the typical customers that visit our Christmas tree farm for a fun, family experience. Despite his unkempt appearance, though, there was a delighted sparkle in his eyes and he wore a crooked, happy smile on his face as I walked with him into the snow-covered rows of Christmas trees.

Our footsteps crunched through the deepening snow drifts as the man started telling me about his love of a real Christmas tree for the holiday and how he had one every year of his life but last year. The previous year, he was facing the recent departure of his long-time love interest due to her drug habit.

“She kept trying to quit and I thought she was better, but she kept going back to the drugs,” he said as we walked though the icy pines. “So I had to kick her to the curb. That was tough and it was not a very good Christmas. I didn’t even get a tree. I was in a bad place then.”

I wasn’t quite sure what to say, so I didn’t say anything. He continued talking.

“But I just love Christmas, and Christmas trees. It really is a special time of year,” he said.

With this, I could agree. At this point he said he just wanted to look around for a while and I went to help some other Christmas tree customers who had found a tree. Then, for the next 45 minutes or so, I would occasionally catch a glimpse of him walking through the snowy fields in his sleeveless sweatshirt. He still had the twinkle in his eye and the crooked smile.

The sun was starting to set and the temperatures were dropping. Most of the customers had cleared out of the fields. The man hollered out, “Hey, I think I found one.”

He was covered in snow from leaning into his favorite trees to place a clump of dried grass in the top so he could quickly find it and compare it with his other favorites. His bare arms were red and dripping with melted snow. He had settled on a massive, fat, Scotch pine that he pointed out to me beneath the reddening sky.

The tree was cut and loaded into the old van. We all waved and wished him a merry Christmas as the old van sputtered out of the drive. As he drove off down the road, I was talking with the rest of my family about how that guy must really love Christmas trees; it didn’t look like he had enough money to spend on something like that.

To our surprise, we later found out that when he paid for his tree, he asked to double the price and make sure we donated a tree to someone who could not afford one this Christmas.

We followed his request that year, and he has done the same thing every year since then. We have delivered Christmas trees on his behalf to a struggling cancer patient and her family, local churches, families facing the challenges of unemployment, military families missing their loved ones, and disabled elderly folks unable to make it out the farm. Every year that same guy shows up in tattered clothes, with the same rusted van and the same Christmas spirit.

This year, a family came out and was looking for a tree with me in the field. The mother started crying multiple times when I was telling her about where to look for trees. After about the third set of tears, she told me, “I’m so sorry. This August my son and I were making pizza together at my house. He had a seizure and died right there. They couldn’t get it to stop. He was 27 and we would always come here to your farm to pick out a tree together.”

The man in the rusty van had been out to the farm the previous day and I couldn’t think of a better candidate for his donation tree. Once they picked out a tree I talked a bit more about her son with the woman and her family. And, even though we are well beyond ragweed pollen season, I’ll be darned if my allergies didn’t flair up a bit when I told the family the story about the man in the rusty van and how their tree this year would be free of charge in honor of their son.

The generosity of the mysterious man in the dilapidated van has not only enriched the lives of the recipients of these trees, but also ours. He definitely does not fit the mold of most of the other customers, but maybe most of us ought to try and be a bit more like him — especially in 2020.