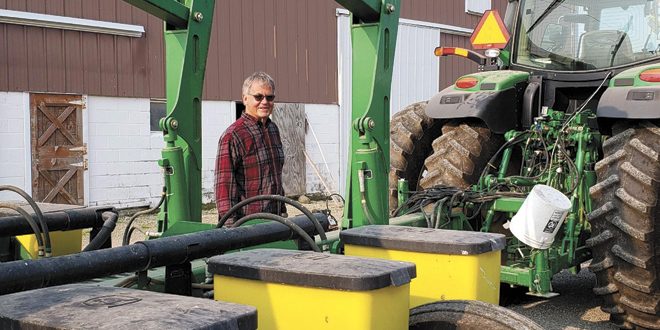 Gary Shick, from Hardin County, started experimenting with no-till in the late 1960s. Photo provided by the Shick family.

Mother Nature certainly can offer no-till farmers plenty of external challenges, but sometimes the greatest difficulties from no-till come from within.

“When I started into the no-till, I wondered why everybody wasn’t doing this. I pushed and pushed and after a while I decided, this is not going to work unless that person wants it to work,” said Gary Shick, a Hardin County farmer who was named the 2020 No-Till Farmer of the Year by the Ohio No-Till Council. “Unless you want to make it work, it is not going to work.”

Shick farms mostly rolling ground, with some flat fields and heavy, wet soils mixed in. Some of his fields were a natural fit for no-till in the early 1970s, though many were not.

“I graduated from high school in ‘65 and I had my foot in the door for farming. I had a dad who was helpful and was looking for some help. We went into shares early on and started looking at no-till. ‘No-till Bill’ Haddad started a group and I was the first one involved in our area. I rented a 6-row no-till shoe planter from the neighbor in 1969 and did double-crop beans. I thought it was good and we ended up buying one like it,” Shick said. “I had a dad who was phasing out and I was phasing in and he was willing to let me try some things on the back 40 or the back 20. We saw some things that would work. I had heard of some things to be cautious of so I tried avoid those. Sometimes it was advantageous and sometimes it was not. From the late 70s on we were pretty much committed to 100% to no-till. We have very little flat ground. Probably a third of it is HEL ground. We have some Blount that is pretty flat and pretty wet and we just have to wait that out in the spring.”

Some of those early no-till experiments generated a fair amount of local interest at the time.

“People would drive by and wonder what was going on. I remember one guy stopped and asked, ‘What in the heck are you doing?’ One of my first years I planted corn into sweet clover that was four feet tall. I wondered myself what I was doing, but they said it would work,” Shick said. “That gentleman kept driving by daily or weekly. It surprised him and me because it did work that year. That was in 1970. It was sweet clover behind wheat stubble. It was probably a 30-acre field. That was one of the first things that did happen with a cover crop and no-till for us. The biggest thing was trying to line up the rows with the six-row planter.”

Especially after the early days of experimenting with no-till on the farm, Shick said to expect some “hiccups.”

“Don’t be afraid to put it out in front of your house or next to the highway so other people can watch and learn from it. That was my best experience, laying it out there for the public and having questions about that,” he said. “You’re going to have some foul ups or screw ups. You need that along the way. If it is all good all the time, then we don’t know what to do when we have to fall back on what we have learned. You need to have bumps in the road to bring you back to reality.”

“When we decided to go toward no-till, my goal in the summer was to chisel plow after wheat to give that ground a last hurrah for working,” he said. “We land leveled that ground and then planted wheat or rye or oats. We rotated that over five years to get ready for the no-till that we have done since then.”

One of the early challenges for Shick’s no-till was wheat stubble.

“When I first started, we were raising corn, beans and wheat. For me the wheat stubble was a hiccup. We decided we didn’t have to have wheat all the time,” he said. “We dropped the wheat in the late 70s.”

There was also a long evolution of equipment used for making no-till work.

“We started with that John Deere and I thought it was great, but I can’t believe what we started with and the evolution that came along. It has come such a long way from the 1970s to what we have in 2020,” Shick said. “After the John Deere, I put together an AC bean planter. I think everybody needs a 1970s-type planter to appreciate what is out there today. That was a goose egg but we managed to make it work somehow.

“I was on the SWCD board and we had a planter and drill we rented out. That was a learning curve, but that is how we started promoting no-till. The equipment got more user-friendly after that.”

“Early on we didn’t think we could no-till in some of our wet, dark ground, or jack wax. I put that to the test early. If Mother Nature is with you, though, it’ll work and when you systematically tile, life is a lot better,” he said.

Especially on the more rolling ground, Shick sees tremendous value in waterway installation to protect the soils and water.

“Back in the early days we put a lot of waterways in,” he said. “I have a 60-acre field that probably has 8 acres of waterways and it takes three times as long to plant that field, but it is a necessity. You have the neighbor’s water coming through and it goes through onto the next neighbor’s fields. We have to take care of the water and the soil.”

Shick also learned the value of working with organizations like the local Soil and Water Conservation District and the Natural Resources Conservation Service. Cooperating with local, state and federal entities has really enhanced the farm’s productivity and environmental sustainability through the last four decades.

“We used to think when someone would pull in in a green truck, ‘Uh oh, what now?’ Reach out for help from people at Soil and Water and NRCS,” he said. “They can be your friend and not your enemy.”

Weed control options have gotten better for no-till as well.

“The chemicals too have come so far,” he said. “Now you can pick your own recipe for weed control. I don’t know where we’ll be in 10 years, and I didn’t know where we’d be now 10 years ago.”

Cover crops have become a bigger part of the operation as well in recent years.

“I went through EQIP several years ago and they paid x dollars an acre to plant cover crops. I’m not eligible for that funding any more and it comes out of my own pocket. I think through years of no-tilling, that ground needs a cover crop to hold everything else together,” he said. “We flew on cover crop rye this year. We intended to drill the corn stalks with rye and didn’t get to it this year because ground conditions were too wet this fall. I am believer in cover crops. The biggest thing we need to learn is when to terminate those cover crops. I was told: keep it simple. You can use oats or radishes that Mother Nature terminates. I have not done much of that yet, but I am going to pursue that. For now I have mostly stayed with rye. I think the worst thing that can happen is that is gets too tall so I lean towards terminating it before planting rather than planting green. It is a year-to-year situation, though. You can’t judge in the winter what is going to happen in the spring until you get there. “

Implementing the wide variety of practices on his farm has not been easy, but there are very clearly benefits to the long-term viability of the farm, its soils and the water running through it. Today, there are more tools than ever before to try.

“We have some ground that has been 50 years in no-till. It hasn’t been the prettiest crop every year, but with waterways, tiling and cover crops it has all tied together to work. There is also a lot of excitement around H2Ohio and trying to work on improving water quality together,” Shick said. “Farmers are doing our share of polluting the water, though not intentionally. Now we have some government money coming in so let’s try some things to be part of the solution. Let’s find the best ways to fix this and do it together.”

Looking back, the most important thing Shick has learned in his years of no-till is patience.

“The biggest thing is promoting patience with no-till. Sometimes it is do as I say and not as I do. It is easy to give that advice at winter meetings but when it comes down to it and you’re planting ahead of a rain, you can make some decisions that come back to haunt you,” he said. “I was pretty nervous when I was 30 or 40 years old about getting things planted. One of the big things now is crop insurance. Now if we don’t get things planted we have the safety net of crop insurance. Crop insurance is a huge safety net to fall back on when making planting decisions in no-till. Age takes care of a lot of things too. I’m in my 70s now and I wasn’t nearly so laid back 20 years ago. I always thought I was a perfectionist but the older I get, the straight rows are no big thing anymore. We still like them straight, but things change as we get older.”

Making no-till work, through the many ups and downs Mother Nature provides for a farm, has been a constant evolution of management for Shick.

“As I strived to better my faming ability, it seemed like sometimes I’d fix one thing and move on to another. You never get things all fixed up, at least I never have,” Shick said. “It is never ending. Have a plan B and a Plan C in the works, because you can’t always rely on Plan A. It is a combination of everything and it does not happen in a year. And if you think you have it all fixed, you might be fooling yourself. Instead of pointing the finger at something else, you realize your finger should be pointing back at you.” 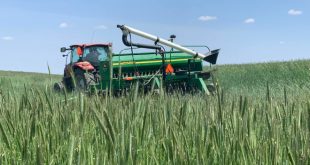 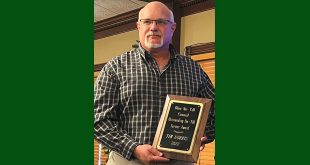