Hit-and-miss in for Brazil’s crops

I’m writing this article in mid-December and many of you would probably want me to tell what will be the size of Brazil’s 2020/21 soybean crop. I wish I could, but it’s too early for that. If Brazil grew soybeans in the Northern hemisphere, like the United States does, we would be in July — and you all know that soybeans can stand a lot of stress in July and still have good yields if weather conditions benefit the pod-filling stage in August.

Remember 2012? I spent the whole July 2012 in the Midwest, crop scouting and talking to farmers, and soybeans didn’t look much better than corn. But then good rains hit several areas in August. Too late for corn, as you know, but still a blessing for many soybean fields. And, despite some damaged areas that we can see here and there, Brazil’s 2020 soybeans are in better shape than the U.S. soybeans eight years ago.

In normal years, areas planted in late September and early October in top producers Mato Grosso and Paraná would be filling pods already, and I would be able to tell you what kind of crop we could expect in those states, which account for about 42% of Brazil’s total production.

One of the problems now in 2020 is that Brazil had a historical planting delay caused by very irregular rains. By Oct 15, according to AgRural, only 8% of the forecasted area had been planted, compared to 21% in the same period last year. Things improved in November and December, but they are not exactly normal yet.

That delay, as I wrote last month, means that Brazil will have a late harvest in 2021, with impacts on the export calendar (we won’t be able to export soybeans in January) and also on the second corn crop planting, which will be delayed. Another issue is the difficulty of forecasting yields in December, since we have fewer areas in reproductive stages than in a normal year.

In early December, AgRural reduced its production forecast by 600,000 metric tons, to 131.6 million. This is still a record crop, but new revisions will be released in late December and mid-January.

In Brazil, and especially in central states such as Mato Grosso, soybean planting heavily relies on spring rains. That happens because winter (June to September) is extremely dry. Sorriso, in northern Mato Grosso, for example, normally receives about 72 inches of rain every year, but only 0.8 inches during winter. Now in 2020, it was virtually zero. And winter temperatures in Mato Grosso have nothing wintry about them, easily reaching 100 degrees F.

When September 2020 came, soils were much drier than normal. Brazil as a whole had one of its driest winters on record. That’s why, by the way, we had more fires in areas that normally burn by the end of the winter, just in case you’re wondering why you saw more people on TV and social media talking about Brazilian fires this year (maybe with some archive images shot in Africa of scared elephants and giraffes).

Back to soybeans, that lack of moisture would be acceptable if spring rains were good. But they were not. In Mato Grosso, irregular rains are common in late September and even in the first half of October, but farmers started to feel alarmed when rainfall continued erratic during November. In some areas, the amounts were even close to normal, but the hit-and-miss pattern was something never seen in the state in decades.

Now in mid-December, after some good rains since late last month, soybeans seem to be back in the game in Mato Grosso. The full potential has already gone, but the state can still have a good crop if weather conditions cooperate until January. But January might be a dangerous month for soybeans planted miles and miles away from Mato Grosso, in southern Brazil, because of La Niña. I’ll write about that next month. Meanwhile, may you all have a blessed holiday season!

2020, a year when Brazil imported US soybeans

USDA NASS to re-survey operators with unharvested corn and soybeans 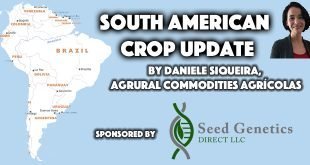 Will Brazil plant corn later than normal in 2020?

The soybean planting in south-central Brazil is now relatively on pace with historical averages, but …